Bunia/New York, July 21, 2006 – Since July 14, an emergency team from Doctors Without Borders/Médecins Sans Frontières (MSF) has been working in the town of Gety, located south of Bunia, the capital of Ituri District in the Democratic Republic of Congo (DRC), to assist a population of 39,000 displaced people. Bringing aid to the displaced is particularly difficult as security conditions remain tenuous in the area and as the population has doubled during the past week, growing from 22,000 on July 14 to 39,000 today. However, assistance is crucial as the displaced families, exhausted by their journey, are gathered amidst dire sanitary conditions. 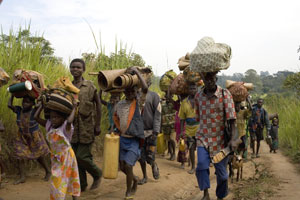 As the DRC prepares for its first presidential elections in 40 years, the situation remains tense and volatile in the northeastern district of Ituri, one of the epicenters of violence in the country. Attacks and clashes between Congolese army forces and militia groups are ongoing, causing significant population displacements.

The 39,000 displaced persons living in Gety are particularly vulnerable. After weeks spent in the bush following attacks and the destruction of their villages, people are in an extremely weakened state. They now live in largely unsanitary conditions. As of today, only 120 latrines are available. For such a population in an emergency setting, a minimum of 800 latrines is required. Sources of drinking water are located outside of the town, a few kilometers away from the gathering area. 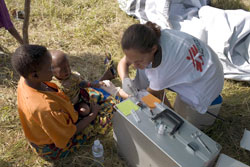 In less than one week, 130 children suffering from severe malnutrition, mostly kwashiorkor, were referred by the MSF emergency team to the Bon Marché Hospital in Bunia, where MSF has been working for the past three years. Additional tents have been set up within the hospital perimeter. Mortality rates among children under three-years-of-age are particularly high.

"In only one day, 16 children died of malnutrition and disease in this area of Gety, which includes 16,000 people," explains Laurent Ligozat, who is in charge of MSF operations.

In Gety, MSF teams have also been conducting a measles vaccination campaign for children under 15-years-of-age. Nearly 10,000 children have already been vaccinated.

A medical doctor, a nurse, and three logisticians are leaving Geneva today to join the team already present in Gety, which includes one doctor, two nurses, two logisticians (of which one specializes in water and sanitation). On Saturday, a cargo plane carrying twelve tons of emergency medical supplies, including therapeutic food, will leave MSF's logistical center in Bordeaux, France.

MSF has been working in Ituri since 2003, including in the Bon Marché Hospital in Bunia, which was set up by MSF during the violence of 2003. There are 325 Congolese and 14 international staff working in the 300-bed hospital. Surgery, maternal care, and medical care for victims of sexual violence are included in the health services. The team also provides emergency response in the area, such as the present one in Gety.