In the world's fastest growing city, on the banks of a perilously polluted river, MSF runs a primary health care center that provides care to children under five and pregnant and lactating women. 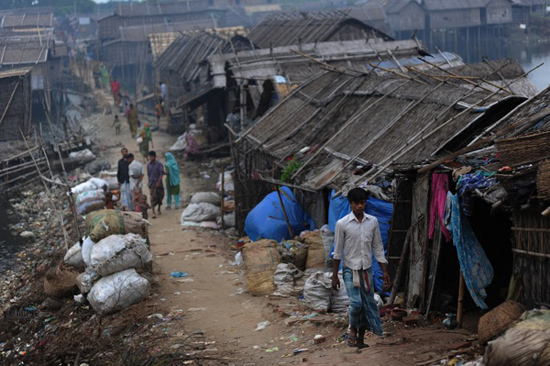 Living conditions in the Kamrangirchar slum of Dhaka have profound public health consequences for residents.

Early in the morning, the narrow alleyways of Kamrangirchar are already bustling with activity. The screeching sound of saws cutting through wood, the clank of metal being hammered into shape, and the cacophony of small factories producing everything from salt to bricks to balloons give the impression that everyone here is hard at work. Yet judging by the worn-out sandals and the weary faces, few of them are actually earning much money.

Kamrangirchar is one of Dhaka?s many slum areas, a product of the mass urban migration that has made Bangladesh?s capital the world?s most rapidly expanding city. Once used as a dumping ground for the city?s rubbish, the Kamrangirchar peninsula has become heavily populated in the last few decades. Covering just three square kilometers, the area is now home to 400,000 people. Public services and infrastructure have struggled to keep pace with the growing population, and access to affordable health care is extremely limited.

Here, on the banks of one of the most polluted rivers in the world, Doctors Without Borders/Médecins San Frontières (MSF) runs a primary health care center that provides care to children under five and pregnant and lactating women. Nearby, MSF runs a therapeutic feeding center that has admitted 220 severely malnourished children since it opened five months ago. Through a largely home-based program, these children are being fed with ready-to-use therapeutic food (RUTF), a thick nutrient-rich peanut paste that helps children reach a normal body weight. 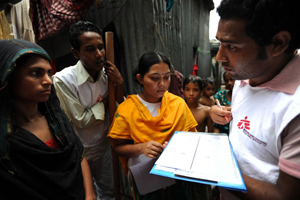 Every morning, women in brightly colored saris queue up with their young children outside MSF?s facilities. Nearly all of the children are thin and frail, and some have rashes on their skin. Many also have a large brown dot painted on their foreheads, a bindi, which is a symbol of good fortune that is believed to provide protection against evil spirits. A few meters away, a group of older children splash happily in the grey river water, which is tainted by toxic waste from the factories upstream.

?A lot of the patients are suffering from diarrhea and skin diseases,? says Sophie de Montpelier, MSF?s field coordinator. ?This is a direct result of the unhygienic living conditions in this heavily polluted area. Exposure to the contaminated river water, which is nothing less than raw sewage, is potentially hazardous. Families as large as 10 often live together in one small room and share latrines with neighbors, which increases the spread of communicable diseases.?

Government figures show that some 40 percent of Bangladeshis live below the poverty line, most surviving on a meager diet of rice and vegetables. ?Even simple changes in cooking habits and hygienic practices can make a difference to people?s health,? says de Montpelier. ?If people buy vegetables, they usually leave them in lots of water, then boil and fry them. People need to understand that this actually takes away a lot of vital nutrients. And when they boil rice, they could keep the water, rather than throwing it away.?

To help prevent children becoming malnourished, MSF staff give cooking classes in people?s homes, teaching mothers about the importance of food hygiene and nutrition. During these sessions, women learn new ways of preparing khichuri?a   local dish containing rice, lentils and vegetables?so that nutrients are not lost in the cooking process.

?Even though malnutrition is a major health problem, it is not considered an illness, as such, but a symptom of other diseases,? says de Montpelier. ?The level of health awareness in this community is very low, and people have a great deal of superstitious beliefs, such as believing that children may be touched by bad spirits through consuming breast milk or eating fish. Some mothers believe that a baby with diarrhea should not be given extra water because the body already contains too much liquid. That?s why MSF is investing a lot in health promotion activities here.?

MSF plans to open more health facilities in the area in the near future, so that it can use its experience to help more mothers and children live healthy lives in Kamrangirchar.