Bangladesh: Rohingya Forced Out of Makeshift Camp With Nowhere to Go 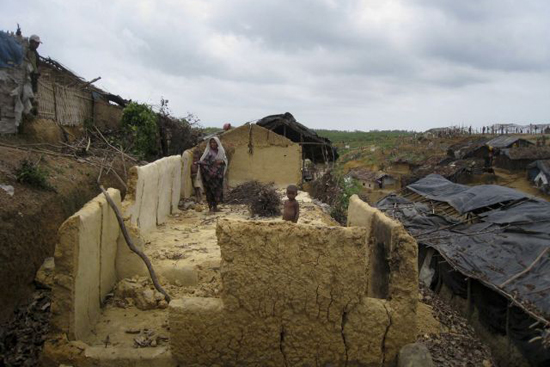 A woman and child stand inside a destroyed shelter in Kutupalong makeshift camp.

The Rohingya, a Muslim minority population in Myanmar, have fled severe repression and persecution in their homeland and sought refuge in Bangladesh and other neighboring countries for more than 50 years. Sadly, few find the assistance they desperately need and instead are forced to survive in huge makeshift camps with little or no basic amenities, including food or water. Now, increasing violence and intimidation in a makeshift camp in Kutupalong, Bangladesh, is forcing the Rohingya to flee once again. Doctors Without Borders/Médecins Sans Frontières (MSF) reports on the appalling living conditions and maltreatment refugees are enduring at the hands of local authorities there.

She returned from her work at the usual time. But on this occasion Laila’s eyes couldn’t believe what she saw. Ever since she had moved to Kutupalong seven years ago, life had been difficult, the surroundings filthy and the help little to nonexistent. But now she had lost her shelter and the small things that made up her home lay totally destroyed. “Why?” She asked the authoritative figure standing among the group. In response he brandished a knife and threatened to cut her if she complained any further. 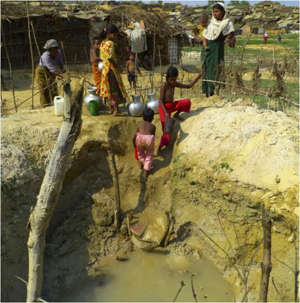 Laila is one of 25,000 unregistered Rohingya refugees in the area who have sought a safe place to live on the outskirts of the state-endorsed refugee camp supported by the UN High Commissioner for Refugees (UNHCR). Unlike their approximately 10,000 registered counterparts, the unregistered refugees in Kutupalong struggle to survive day to day, living in squalid conditions, vulnerable to ill health and exploitation. “It’s some of the worst poverty I’ve ever seen,” says Gemma Davies, MSF project coordinator in Kutupalong. “People are living in makeshift shelters built out of bits of plastic and wood or whatever they can find. They don’t even have basic things to cook with. And the sanitation is appalling.”

An MSF team has just recently set up an emergency health intervention in the camp. In the last weeks, the situation has spiraled out of control. “This highly vulnerable population is facing imminent expulsion by the local authorities who are using unacceptable methods to uproot them from their homes,” says Davies. “We hear people were dragged out of their shelters if they refused to move. There was one four-year-old girl who arrived at our clinic with knife injuries and another five-day-old baby that had been thrown onto the ground. It is totally unacceptable.”

“If I go to get wood, I’ll get arrested; if I collect water I’ll get beaten; if we move our houses, we’ve got nowhere to go.”

Even as the inhabitants of the UNHCR-supported refugee camp at Kutupalong celebrated International Refugee Day on June 20, MSF was informed by unregistered refugees that they had once again been told by the local authorities to leave. People were first ousted from land surrounding the UNHCR-supported camp, and then forced off the adjacent Government forestry land.

The MSF clinic at Kutupalong, originally intended to deliver basic healthcare to children under five years old and to treat the high levels of global acute malnutrition in the camp, has become a haven for those exhausted by what is happening. “They come to us for solutions, which we can’t offer them,” says Davies. The team of MSF medics and Bangladeshi staff feel totally helpless in a situation that is swiftly spiralling out of control. “One day, we had more than 50 people turn up to our clinic, saying that they had nowhere to go, they didn’t know what to do, they’d been moved three times in the last week. And we can’t do anything to change their situation. They’re tired. People are threatening suicide now,” Davies says.

“If I’m told to move again, they can kill us, they can run us over. They can poison us, but I’m not going to move again,” said one woman living in Kutupalong camp whose feelings of desperation and resignation are shared among the refugees. “If I go to get wood, I’ll get arrested; if I collect water I’ll get beaten; if we move our houses, we’ve got nowhere to go.”

Amid the unrest, MSF continues to offer medical care to those in need of assistance, both camp residents and host community alike. “Our clinic is still very basic and it’s really just for under-five-year-olds. But given the recent events, people of all ages who have suffered violence have been coming to our clinic. Fortunately, the 27 people who came the other day mostly had minor injuries. So at least we can treat their wounds and offer clinical support,” Davies says. “We don’t have the solution for these people. It’ s frustrating, but what we can do is provide whatever medical support we can, be there with them, and bear witness to what is happening.”

MSF has assisted people in Bangladesh since 1992, most recently setting up a basic healthcare program in the Chittagong Hill Tracts, assisting victims of Cyclone Aila and implementing an emergency intervention to assist unregistered Rohingya in Kutupalong makeshift camp, with services also open to the host community.