Bangladesh: The Rohingya Moved From One Deplorable Situation to Another

MSF was recently alerted to a growing health crisis in the Kutupalong area of Bangladesh, where thousands of Rohingya—a Muslim ethnic minority originating from northern Rakhine state in Myanmar—are struggling to survive unassisted in a makeshift camp. 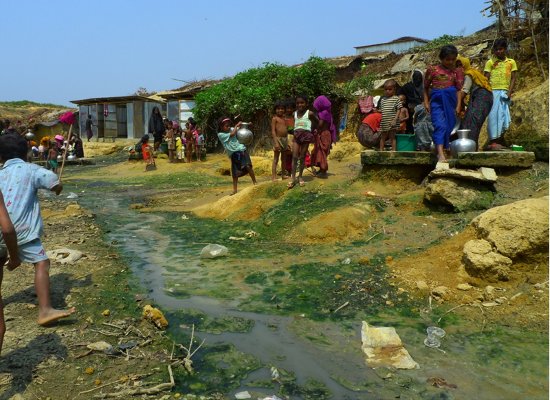 Children play around polluted water streaming through Kutupalong unofficial camp, where an estimated 20,000 people are living.

Doctors Without Borders/Médecins Sans Frontières (MSF) was recently alerted to a growing health crisis in the Kutupalong area of Bangladesh, where thousands of Rohingya—a Muslim ethnic minority originating from northern Rakhine state in Myanmar—are struggling to survive unassisted in a makeshift camp.

The MSF team in Bangladesh immediately arranged an assessment of the area, which revealed an unacceptable humanitarian situation. An estimated 20,000 people were found to be living in foul conditions, with little access to safe drinking water or sanitation.

“In Kutupalong unofficial camp the water and sanitation situation is appalling and needs to be addressed urgently,” said Michel Becks, MSF water and sanitation expert. “Feces and polluted waste water can be found throughout the camp, presenting a significant health risk. There are insufficient water points and those that are available are very poorly protected.”

A nutritional survey showed equally alarming results. According to an MSF emergency assessment report, the prevalence of global acute malnutrition exceeds the emergency threshold and food insecurity is severe among the majority of households. With the forthcoming rainy season presenting an additional immediate threat to the health of the population, urgent interventions are required to prevent further death and disease, the report concluded. 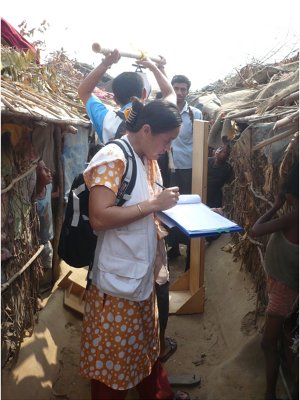 MSF staff assesses the humanitarian conditions at the camp.

In response to the situation, MSF is in the process of starting an emergency program providing basic health care to children under 5 years of age, running an outpatient and inpatient feeding program, and taking measures to improve the water and sanitation in the camp.

The Kutupalong makeshift camp is situated south of Cox’s Bazaar, in the region surrounding the official Kutupalong refugee camp operated by the UN High Commissioner for Refugees. It has reportedly been in existence for over a year, gradually increasing in population size. The camp is populated by Rohingya, a people who for decades have fled the persecution and discrimination they face in Myanmar to seek refuge elsewhere. Sadly, few people find the assistance they hope for and many go on to suffer countless indignities in the countries to which they have fled.

Approximately 25,000 people are officially recognized as refugees in Bangladesh. Hundreds of thousands more people struggle to survive without recognition or assistance, moving from one deplorable situation to another, vulnerable to exploitation.

MSF has been providing medical assistance to the Rohingya for years and is witness to their ongoing suffering both inside and outside of Myanmar. A fundamental solution, not only in countries where Rohingya seek asylum, but most importantly at their origin in Myanmar, is crucial to restoring the health and dignity of these long-suffering people.