Bangladesh: Treating Survivors of Sexual and Gender-Based Violence in Dhaka

Hundreds more women and girls accessed medical treatment in 2015 after experiencing sexual and gender-based violence in Kamrangirchar, in the Dhaka district, Bangladesh. New patient data collected by Doctors Without Borders/Médecins Sans Frontières (MSF) shows clinics run by MSF in the areas of Alinogor, Thoda and Jawlahati treated almost double the amount of victims of sexual and gender-based violence in 2015 compared to the previous year – 1,154 patients compared to 684 in 2014. This includes those who have experienced rape, intimate partner violence, sexual violence and domestic violence.

“As soon as we opened these decentralized clinics, combined with raising awareness locally, we saw large numbers of women and girls who needed medical care,” says Emilie Gassier, MSF’s project coordinator in Kamrangirchar.  “Usually women come to get help when their husbands and relatives are at work. Often they cannot afford the cost or the time to go to other areas of Dhaka. So it is important to have clinics near their home and easily accessible – allowing victims to come without having to explain themselves to anybody.”

MSF’s clinics for women in Kamrangirchar, were established in 2013 to provide community based services that are easily accessible. They remain the only health facilities in the area offering free and confidential medical services and counselling for victims of sexual and gender-based violence. MSF collaborates with the One Stop Crisis Center (OCC), run by the Ministry of Women and Children's Affairs, in the Dhaka Medical College Hospital for severe cases that require referral services. 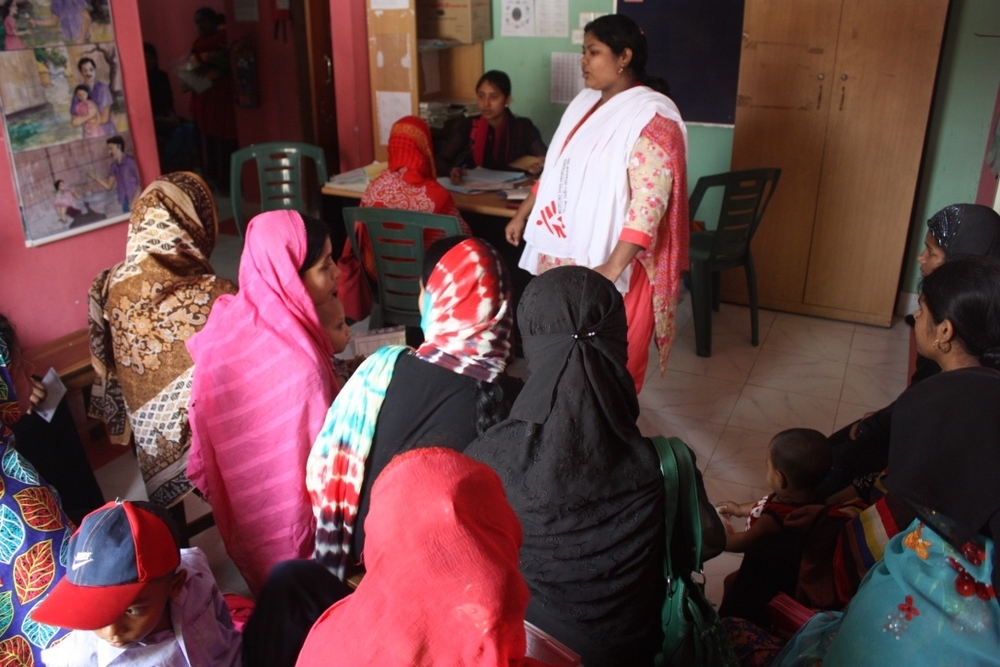 In 2015, more than 700 of the women cared for by MSF had experienced intimate partner violence. While women and girls of all ages come to the clinic, most patients are aged from 15 to 30, says Dr. Moury, one of the medics running the women’s clinics in Kamrangirchar.

“The younger girls really struggle to open up about any sexual or physical violence they might have experienced,” says Dr Moury. “The main issues are the stigma and their sense that they have no alternative – that even though their husband is assaulting them, they have to stay with him. Some see it as their fate. We see that women are often too scared to get help, but as awareness grows that these services are here and accessible to them, more and more women are seeking treatment.”

MSF’s clinics for women focus on treating the medical consequences of sexual and gender-based violence. Patients who have experienced rape may have serious injuries resulting from the attack, as well as increased risk of sexually transmitted infections such as syphilis, chlamydia and gonorrhea, as well as hepatitis B and HIV.

Sexual violence is also associated with a high prevalence of symptoms related to post traumatic stress, for example, avoidance, flashbacks and nightmares. and with other mental health disorders such as depression or anxiety. Women are encouraged to come within 72 hours of experiencing an assault to be seen by a doctor and to talk to the mental health team, but they are also welcome anytime, even if they cannot make it within 72 hours.

"It is essential that these women can make their own decisions about their medical needs, and it is vital that, during acutely difficult times, they have a place where they can get confidential medical care and psychosocial support,” says Gassier.

MSF has been working in Bangladesh since 1992 and currently runs two projects. MSF’s clinics in the slum areas of Kamrangirchar provide a range of services focusing on sexual and gender-based violence, adolescent reproductive health and occupational health for factory workers. MSF also runs a clinic in Kutupalong, Cox’s Bazaar, providing health and maternal care to Rohingya refugees and the local Bangladeshi population.

To mark the day MSF staff and patients print their hands on a large white cloth that hangs in the waiting area of the clinic for the rest of the year, The message for this year - Healthy Woman, Healthy family.
Alva White/MSF