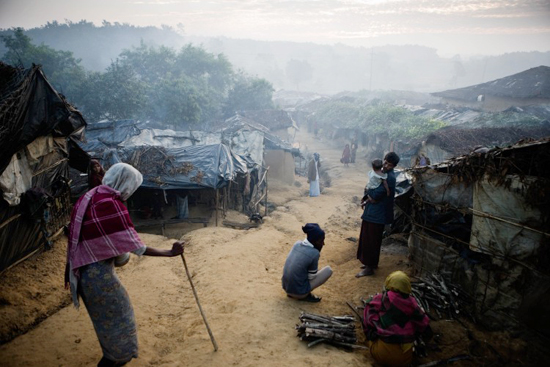 Thousands more stateless Rohingya people have fled to Kutupalong makeshift camp in Cox's Bazar District after being driven from their homes.

Stateless Rohingya people in Bangladesh are currently victims to unprecedented levels of violence and attempts at forced repatriation. Recent weeks have seen thousands of people arrive at Kutupalong makeshift camp as they flee what appears to be a violent crackdown on the Rohingya presence in the country. At its clinic in Kutupalong, in Cox’s Bazar District in the south of the country, Doctors Without Borders/Médecins Sans Frontières (MSF) has treated victims of beatings and harassment by the authorities and members of the community. The victims are people who have been driven from their shelters throughout the district and in some cases forced back into the river which forms the border to neighboring Myanmar.

Since October 2009, the camp has grown by 6,000 people, with 2,000 of these arriving in January 2010 alone. Without official recognition, they are prevented from supporting themselves, and are not permitted to receive official relief. As the numbers swell, nearly 29,000 people find themselves camped on a patch of ground with no infrastructure to support them, posing a serious threat to health. Action is needed now to stop this humanitarian crisis.

MSF has delivered healthcare to the Rohingya and their host communities in Bangladesh since 1992. 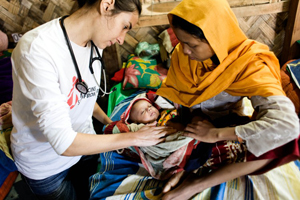 An MSF doctor examines a baby at the MSF project in Kutupalong makeshift camp.

For decades, thousands of Rohingya, an ethnic and religious minority from Myanmar, have sought refuge in Bangladesh. Today, despite the well-known situation in their country of origin, just 28,000 of these are recognized as prima facie refugees by the Government of Bangladesh, and live in official camps under the supervision of the Office of the United Nations High Commissioner for Refugees (UNHCR).

In sharp contrast, an estimated 220,000 others struggle to survive—unrecognized and largely unassisted. Despite fleeing the very same circumstances as their counterparts in the official refugee camps, these people are forced to live as illegal migrants, vulnerable to ill health, exploitation, and abuse. The agreement between the Government and UNHCR restricts the latter’s activities to the 28,000 registered refugees. And UNHCR, mandated to protect refugees worldwide, makes little visible protest at the injustice of this situation.

The majority of Rohingya in Bangladesh reside in Cox’s Bazar, an overcrowded and resource-poor area bordering Myanmar. While thousands of self-settled Rohingya have lived in the local community for years, they are largely perceived as a burden on already scant resources and a threat to the local job market through the provision of cheap labor. Their unpopularity, fuelled by the local media, makes them an easy punching bag for unscrupulous local politicians wishing to score political points.

No Man's Land: Rohingya Trying to Survive in Bangladesh

In 2009, MSF was alerted to a large number of unregistered refugees gathering in desperate circumstances on the periphery of the UNHCR-supported refugee camp at Kutupalong. When MSF made its first exploratory assessment in early March, it found more than 20,000 people, 90 percent of whom were severely food-insecure. Malnutrition and mortality rates were past emergency thresholds, and people had little access to safe drinking water, sanitation, or medical care.

In response, MSF immediately initiated an emergency humanitarian action, treating severely malnourished children, offering basic health care, and improving water sources and waste facilities. Within one month, MSF had enrolled more than 1,000 malnourished children in its therapeutic feeding program and treated around 4,000 under-five-year-old children in its outpatient department. Since then, the project has developed into a primary health care program, including outpatient and inpatient care and community outreach services, in accordance with the prevalent medical needs of people in the makeshift camp and surrounding area. 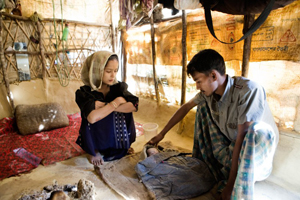 A Rohingya family struggles to survive at Kutupalong makeshift camp.

In June and July 2009, local authorities demolished shelters and forcibly removed inhabitants in an attempt to clear a space around the perimeter of the official UNHCR camp at Kutupalong. MSF witnessed first-hand the violence against unregistered Rohingya, and provided medical care for some of the victims. At the time MSF treated 27 people who presented at the clinic with violence-related injuries, the youngest being a five-day-old child who had been thrown to the ground.

Again, in October 2009, MSF began to receive unregistered Rohingya patients suffering from violence-related injuries in the Kutupalong clinic. This time patients told stories of being driven from their homes east of Cox’s Bazar in Bandarban District, many of the homes having been destroyed by the authorities. Some of the patients spoke of having been forced into the Naf River and told to swim back to Myanmar. In January 2010, patients started to arrive from Cox’s Bazar District with similar stories. To add to the brutality of the authorities, the Rohingya also suffer at the hands of the local population, whose anti-Rohingya sentiment is fuelled by local leaders and the media. Throughout this period, MSF has treated patients for beatings, machete wounds, and rape. This is continuing today.

‘’I thought I ran away to find shelter, but before even staying one week thieves came and robbed me of the money I had, cut us with machetes and wanted us to die. Where do I run to now?” one patient said while being treated for open wounds at the MSF clinic.

Humanitarian crisis at the makeshift camp

Today, scared and with nowhere else to go, Rohingya are arriving in the thousands at Kutupalong makeshift camp. Of those arriving at the camp, some are women travelling alone with children; their husbands having gone out to work, never to return. With no way of feeding their family, they risked arrest to travel to Kutupalong to seek protection in numbers.

“I used to think I had a home. But after two months of constant threats from people I lived with for 15 years since leaving Myanmar, I had to move. I felt sad and came to the makeshift camp. I lost my belongings, but my life and family comes first,” said another patient who had recently arrived at the makeshift camp.

Since October the camp has grown by over 25 percent—that is almost 6,000 people, with 2,000 of them arriving in January alone. With a total population of over 28,400, the unregistered Rohingya at Kutupalong makeshift camp now outnumber the total registered refugee population supported by UNHCR in Bangladesh. Without official recognition these people are forced to live in overcrowded squalor, unprotected and largely unassisted. Prevented from supporting themselves, they also do not qualify for UNHCR-supported food relief. As the numbers swell and resources become increasingly scarce, the cramped and unsanitary living conditions pose significant risks to people’s health.

Forced back to Myanmar

Rohingyas in Bangladesh: Unwanted and Homeless

On October 24, MSF staff treated four refugees from the makeshift camp for trauma injuries. According to the patients, they had been stopped by police at night and asked to show their papers. They had none, and the patients were forced into a police van, beaten, and finally pushed into the Naf River and told to go back to their country. After hiding in the water for some time, they managed to return to the MSF clinic for help. In this case, the people had been able to make their way back to Kutupalong to seek medical care for the injuries they had incurred. However, reports of people being pushed back across the border to meet an unknown fate are many. Attempts at forced repatriation by the Bangladesh border security forces (BDR) are well documented by the local media, and are repeated in the stories of unregistered Rohingya throughout Cox’s Bazaar District. Such actions clearly go against the principle of non-refoulement as stated by international law.

This is not the first time that MSF has witnessed large numbers of unregistered Rohingya gathering in desperate circumstances, vulnerable to ill health, exploitation, and abuse. In 2002, when MSF was working in one of the official camps, the police action “Operation Clean Heart” saw unregistered Rohingya violently forced from their homes, which led to the establishment of the original Tal makeshift camp on a swamp-like patch of ground.

This camp relocated, and in the spring of 2006 MSF started a medical program at the new site, where at the time around 5,700 unregistered Rohingya (a number that continued to rise) lived in atrocious, unsanitary conditions on a small strip of flood land in Teknaf, Cox’s Bazar District. After two years of providing humanitarian assistance, and following strong advocacy by MSF, which ultimately gained the support of UNHCR and the international community, the Government of Bangladesh allocated new land in Leda Bazar for around 10,000 people in mid-2008. Less than one year later, nearly 13,000 people were living in Leda Bazar Camp, their fundamental living conditions having changed little. Today, people continue to struggle to survive without recognition and opportunities to provide for themselves inside an increasingly hostile environment.

Ultimately, the plight of the unregistered Rohingya in Kutupalong and elsewhere in Bangladesh is part of a larger, chronic problem on which none of the relevant actors have chosen to act. Stemming from Myanmar, the issue has developed into a regional challenge on which the health and dignity of countless vulnerable people depends. In 2002, MSF organized a photo exhibition to mark 10 years of an unacceptable situation for these people who are, as one 19-year-old Rohingya described it, “caught between a crocodile and a snake”.

Incredibly, although another eight years have passed, nothing has fundamentally changed for the Rohingya. They remain trapped in a desperate situation with no future, vulnerable to neglect, abuse and manipulation, and to the kind of intense violent crackdowns they are suffering right now.

Urgent action by those responsible 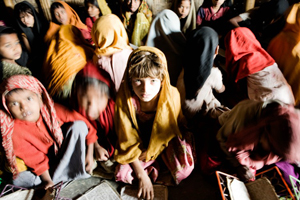 Rohingya children receive some education inside the makeshift camp.

As the persecution of the Rohingya continues, and a humanitarian crisis intensifies, it is imperative that the Government of Bangladesh act immediately to stop the violence and provide this highly vulnerable people with the protection to which they are entitled. In addition, the Government of Bangladesh must stop the practise of forcing the unregistered Rohingya back to Myanmar in contravention of international law.

The Office of the United Nations High Commissioner for Refugees needs to take greater steps to protect the unregistered Rohingya seeking asylum in Bangladesh. UNHCR must not allow the terms of its agreement with the government to undermine its role as international protector of those who have lost the protection of their state, or who have no state to turn to. To date, the absence of a clear UN policy to tackle the crisis has left large numbers of highly vulnerable people at risk; this is in spite of continued efforts by MSF to alert UNHCR to the humanitarian needs and unacceptable abuses taking place.

Regional powers have a key role in addressing the more fundamental problem. As the Thai boat crisis of 2009 made clear, regional solutions are needed to the situation of the stateless Rohingya. And the international community must support the Government of Bangladesh and UNHCR to adopt measures to guarantee the unregistered Rohingya’s lasting dignity and well being while they remain in Bangladesh. Bangladesh is a densely populated country, in which the Bandarban and Cox's Bazar districts are among the poorest. Strong competition over work, living space and resources is inevitable at a local level. To find ways to overcome these issues and ensure the provision of adequate protection and assistance necessitates strong financial and political support from donor and regional countries.