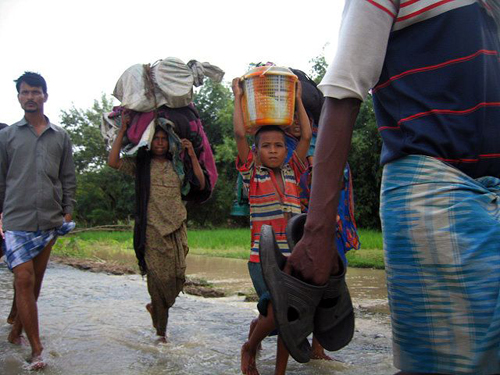 Hundreds of thousands of people remain displaced in northeastern India and neighboring Nepal after the worst flooding in 50 years. In the Indian state of Bihar, Doctors Without Borders/Médecins Sans Frontières (MSF) is providing humanitarian assistance in two of the worst affected districts, Araria and Supaul, where tens of thousands of people have sought safety in newly-created displaced persons camps. MSF is also delivering critical health care in Nepal to about 27,000 people in the difficult-to-access Saptari district.

The disaster began in mid-August, when the Kosi River in Nepal burst its banks and changed course, destroying hundreds of villages and thousands of acres of farmland in Bihar state. Many had to abandon their homes in the middle of the night, losing everything, including precious livestock, while others were stranded for several days before being rescued by the army. One month later, the survivors remain homeless and destitute. It is likely they will be unable to go home for several months. Several survivors told their stories to MSF.

I come from a village nearby, called Asanpur. We are staying under a shelter with around five or six people. We built it ourselves with bamboo and whatever we could muster. Our village was totally flooded. We lost everything including wheat, crops and rice. There are only three or four houses left, only the biggest houses are still standing. Now we can’t plough because the paddy fields are inundated. I don’t know what we will do. We couldn’t save any food or any clothes. We received plastic sheeting and items like containers from MSF but we haven’t received anything from the government. Food packets were airdropped, but it’s still not enough. We need more food, clothes and drugs. My wife was sick so she went to see the MSF doctors. She had headaches, stomach pains, fever and diarrhea for two or three days. We want to go back to our house but it’s too early and we will probably need to stay two or three months here.

Tareia Dive, 30
Living in a camp in Raniganj, Araria district 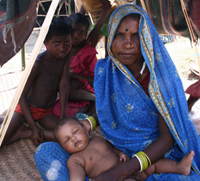 We left our house when the water rose. The whole village was flooded. The army helped us with their boats and we came here. My house has been destroyed along with the crops and food. People stayed three days on the roof of the orphanage without food or water, waiting to be rescued. There are around 300 to 400 people in this camp now. I came with my five children and we’ve received food from the government. My baby got sick with diarrhea; it’s very difficult for the children and us.

I was here visiting people when the flood took place. I’m from Forbesganj (north of Bihar). Many villages in the Chattipur block were badly affected because this area is close to where the Kosi River breached its embankment. No one took care of this barrage, that’s why it happened. It was scary. The floods began at night and within 48 hours the water rose high and the current was strong. Children were sleeping. There was a storm and everyone tried to escape in a panic. They ran, swam, climbed onto their roofs or up trees, or tried to walk to dry land when possible. In some of the villages, people stayed on their roofs for a very long time. The army has rescued many villagers and brought them to Chuni, this camp. Here we have a food distribution center and we can cook the food that has been airdropped. There are thousands of families waiting here now. 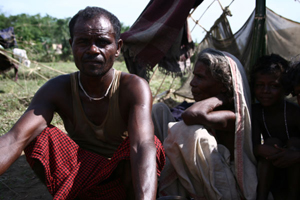 I’m here with my mother. I have three children and I’m a widow. We’ve lost everything and we are just waiting in this shelter until we can go back. The water began rising in the middle of the night. I had never seen anything like it. It rose up to five feet in some places. Some people had mobile phones and they called to warn us. We lack everything now and we don’t get enough medicines when we get sick. It will remain flooded for several months and we can’t work our fields anymore. In my village everyone was safe, but on the other side many died; no one knows how many. I lost all my cattle because of the flood, but I had to save myself and my family first. I couldn’t do anything about the cattle.”

Manbhar Sharma, 55
Living in a camp in Raniganj, Araria district

The water had been rising all night so in the morning we decided to leave. There was about one foot of water inside the house and it was going up and up. We walked through the water along with six other families, grabbing our children and whatever we could save. We managed to carry some trunks, a few things, but not much, but we brought the cattle and they are here with us. We had to walk for a long time before we reached dry land and we were scared because there are many snakes in the water and the current can be strong. But we couldn’t bring any food. The government has been providing a bit of food here, mainly aloo (potatoes), dhal (dried beans) and grains, but we’re never sure when the next distribution will be. The government doctors come here from time to time, but we lack drugs. In the camp, we are surrounded by water; there are mosquitoes, and it’s dirty and very crammed. There is no clean water and people got sick with fever, headaches, body pains and diarrhea. Until MSF came, we had no plastic sheeting and we hadn’t received anything apart from food. So when it rained we would all gather under the shelter with the best roof. People have made them with saris, bamboo, whatever they have. Until now it has rained quite a lot so at least now people have now a plastic roof above their heads.