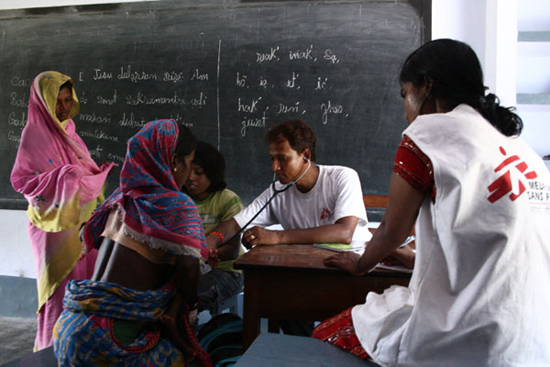 Dr. Binod Kumar consults patients displaced by the floods at an MSF clinic in Bihar state.

Doctors Without Borders/Medecins Sans Frontieres (MSF) has been responding to massive flooding in northeast India and in neighboring Nepal since late August. The flooding, the worst in 50 years, was caused by a breach in an embankment on the Nepal side of the Kosi River, which forced the river to take a new course, destroying hundreds of villages and thousands of acres of farmland. Hundreds of thousands of people have been displaced and tens of thousands remain in displaced persons camps.

In the Indian state of Bihar, and in Nepal, MSF is responding by setting up a health clinics and helping efforts to improve access to clean water and sanitation, as well as working to stem outbreaks of epidemics. Dr. Binod Kumar was one of the first MSF staff to provide medical assistance to flood survivors in Bihar. Here, he reports on the situation.

What are the main medical problems you see in the camps?

We’ve focused our medical activities on pregnant and lactating women and children under five years old. We’ve seen many cases of severe and acute malnutrition, diarrhea, upper respiratory tract infections and skin infections—problems linked to the contamination of water, cramped conditions, and lack of hygiene. In some areas, diarrhea had become endemic. In Chuni or Sarsakla for example, we took water samples and found that the wells used by the population had been contaminated. We gave people containers and water purification tablets and conducted health promotion sessions to teach people how to use them so they could have clean, drinkable water.

How are the displaced people faring?

The population in this part of Bihar is very rural and very poor. They’ve lost everything. They’re very anxious about food. We systematically treat those who need it with ready-to-use therapeutic food. In the camps we’ve covered, we’ve also provided plastic sheeting because people had been sleeping in the open, homeless, and feeling hopeless. They say they have no clothes, not enough food and that they don’t know how long they will have to stay there.

What is the situation in the camps?

It depends on the camp. Some are being managed by the government and are rather well organized. In other places, people have settled in temporary settlements or along roads, wherever they could find dry land. These settlements can be far from any health centers or neglected because access is difficult. In Chuni, for example, several thousand people were rescued by army boats from the floods but the roads were destroyed or made impassable, so they didn’t receive much aid apart from airdropped food packets. We had to use a tractor to deliver non-food items. Because the roads were so bad, it took a long time and was difficult, but now we have covered the whole camp and everyone has received plastic sheeting, soap, water containers, and water purification tablets. We also continue to run mobile clinics regularly.

What are the risks of epidemics?

The risks are serious because the camp is crammed and the water contaminated. The water level has gone down, but when the water becomes stagnant people’s health may deteriorate. When we reached Chuni, an outbreak of diarrhea was just starting and three or four deaths were reported among hundreds of diarrhea cases. We treated people immediately and the situation is now under control.