Malaria is the world’s deadliest parasite, killing hundreds of thousands of people and infecting more than 200 million every year. Since the early 2000s, Doctors Without Borders/Médecins Sans Frontières (MSF) teams have relied on a combination of drugs known as artemisinin-based combination therapy, or ACT, to fight the mosquito-borne disease.

But when the parasite began showing worrisome signs of resistance to ACT in Cambodia, MSF shifted tactics: not just treating people who were sick, but tracking down every case—including those who were carrying the malaria parasite without symptoms—in an attempt to completely eliminate the disease in the region.

Using a community-based strategy, MSF worked with local groups to root out malaria in some of the most isolated forest communities in Cambodia’s Preah Vihear province. Their ultimate goal: to avoid the spread of resistant parasites to countries where there are high numbers of malaria cases and high mortality rates—in sub-Saharan Africa, for example—a potential public health disaster that MSF malaria expert Martin De Smet called “the nightmare scenario.” 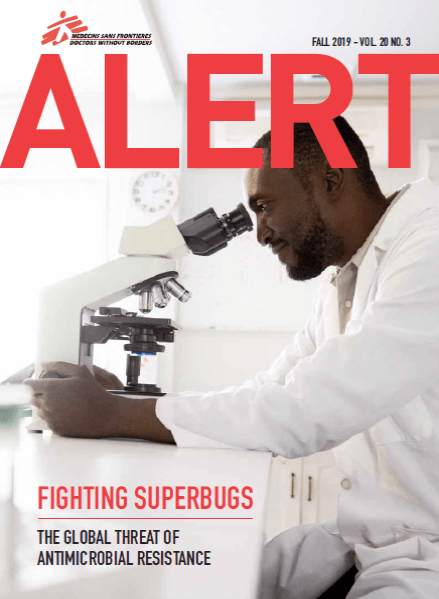 Spread by the bite of infected female Anopheles mosquitoes, the malaria parasite attacks red blood cells, causing high fever and other ﬂu-like symptoms and anemia. Severe cases may attack organs including the brain, causing convulsions, coma, and even death.

It’s also one of the most common diseases Doctors Without Borders/Médecins Sans Frontières (MSF) teams treat around the world. For decades, we’ve used basic prevention techniques to halt the spread of malaria: Since the mosquitoes that carry the parasite usually bite between dusk and dawn, treating homes with safe, long-lasting insecticides and distributing insecticidal bed nets are good ways to help keep people safe in areas where malaria is common. More recently, MSF has used a technique known as seasonal malaria chemoprevention, in which antimalarial drugs are distributed preventatively during times of the year when the chances of transmission are particularly high.

The ACT regimen, with the powerful antimalarial artemisinin as its foundation, has proved an effective tool against Plasmodium falciparum, the deadliest species of the parasite in humans, for some time. In recent years, however, the malaria parasite has developed a worrying resistance to artemisinin, especially in Southeast Asia.

“We always hoped artemisinin would keep its full efﬁcacy,” said De Smet, the leader of MSF’s Malaria Working Group, based in Brussels. “But in the past six to seven years in Southeast Asia, particularly Cambodia, we’ve been increasingly concerned about the efﬁcacy of the drug.”

Artemisinin works quickly, staying in a patient’s blood stream for just a few hours. Normally a course of treatment with ACT takes just three days. So when the drug started taking longer to eliminate the malaria, De Smet and his team became concerned—not just that the falciparum parasites were developing resistance, but that this resistance could spread.

Resistance to older malaria drugs historically began in Southeast Asia, spreading through countries like Myanmar and India before arriving in Africa, De Smet said. No one knows precisely why resistance seems to originate in this region, but it could have to do with the use of artemisinin without so-called “partner” drugs, or the widespread availability of substandard malaria medicines. The threat was still relatively low in these cases, however, because ACT treatment was still highly effective.

So when malaria in Cambodia began showing signs of resistance to the usually reliable treatments, De Smet and his team knew they had to act. In collaboration with Cambodia’s National Malaria Control Program and the Pasteur Institute of Cambodia, MSF put a plan in motion. “The philosophy of the intervention was that we wanted everybody who had malaria to end up being diagnosed and treated,” said De Smet. “That means well-functioning diagnosis and treatment in all health care facilities."

However, in Cambodia’s Preah Vihear province, where the project focused, there was a problem: in this region, many people live in villages deep in the forest, where accessing health facilities is difﬁcult or impossible, especially during the rainy season.

Bringing the project to the people

To solve this problem of access, MSF teams brought treatment closer to the patients who needed it, developing a network of village malaria workers. These volunteers from villages in Preah Vihear were trained by MSF teams to recognize the symptoms of malaria, test for the presence of parasites, and, if those tests came back positive, provide the correct drugs in the correct doses. This community-based initiative eliminated the need for teams of mobile health workers.

“MSF supported development of the system, trained people, and assigned workers in the areas where they were needed,” explained De Smet. “These people are now integrated into the public health system and receive a small salary for their work.”

But not everyone who carries the falciparum malaria parasite exhibits symptoms. This can occur when the patient is not yet sick but will become so later, or if they took some sort of drug—perhaps substandard malaria medicine—that suppresses the amount of parasites in the body but is not strong enough to truly clear them. Either way, this leaves open the possibility of infecting others.

To address these tricky cases, MSF organized active screenings throughout the region of people who might be sick but do not present classic symptoms of malaria like fever, chills, and muscle aches. “We went to villages and contacted people who worked in the forest or on plantations,” said De Smet. “If you’re in that situation we test. We described during our health education sessions that it’s possible for people to have asymptomatic malaria, and we explained that an MSF team will come to offer free screening and treatment, and why it’s important to be screened even if you’re not feeling sick.”

These teams traveled to villages, setting up in meeting places or the homes of the appointed village malaria workers. They worked closely with community leaders to help explain testing and treatment, and to ensure that individuals were able to provide informed consent. “We had villages where on one day more than 100 people came to be tested,” said De Smet. “So we made sure that we were also available very early in the morning or late in the evening, when people come home from work.” Teams often stayed in villages overnight to ensure that as many people as possible were tested and, if necessary, responsibly treated.

Finally, MSF teams conducted epidemiological surveillance as well. “If we had a malaria patient, we’d ask: ‘Where were you? Have you been working in the forest? Where did you go, were you with colleagues? Family members? Friends?’” By tracing the everyday social connections of people who contract the falciparum parasite, we were able to track the spread of malaria and ensure that every case was tested and treated.

"The impact is clearly there"

The project, which originally began in 2014, ofﬁcially came to an end on May 2, 2019, with promising results. “In the area where we worked in Cambodia, there has been both a very strong decrease in cases and the asymptomatic malaria ‘reservoirs’ [people carrying the parasite without exhibiting symptoms],”said De Smet. “In the last screening season we did not ﬁnd a single positive falciparum case, which means we think we indeed managed to largely eliminate these reservoirs of the parasite.”

The methodology has now for the most part become standard in Cambodia. “The way we screened and combined our activities, working from the bottom up and avoiding a one-size-ﬁts-all solution—that strategy has been very well-perceived and appreciated,” said De Smet.

At a spring 2019 meeting in Cambodia’s capital, Phnom Penh, MSF shared details of the project with various organizations and individuals working on efforts to ﬁght malaria, including members of the World Health Organization, Cambodia’s national malaria program manager, public health departments, and the Malaria Consortium, a nongovernmental organization that sustains the work MSF initiated. The upshot was clear: the MSF strategy had not only succeeded, it could form the blueprint for more successful malaria interventions in Cambodia and elsewhere.

But there is still much work to be done. Despite the success of the project in Cambodia and the elimination of malaria in some countries, the numbers of cases continue to rise elsewhere—mainly in Africa. In order to control the spread of the parasite and achieve the ultimate goal of eradicating malaria worldwide, it’s essential to keep ﬁghting resistance to existing drugs and investing in the development of new ones.