CAR: Fighting in the North Forces Thousands to Flee Their Homes 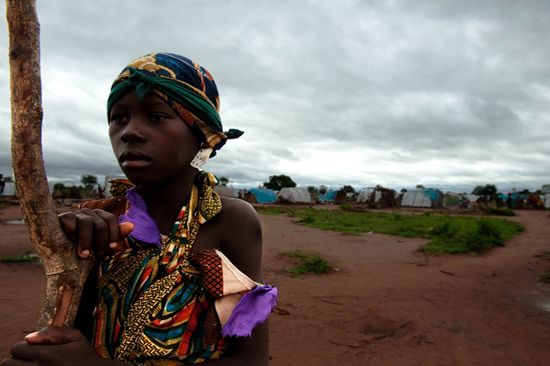 A young refugee in the Kabo camp.

Insecurity in the north of Central African Republic (CAR) has caused thousands of people to flee their homes.

“Villages have been violently destroyed and looted, including some health centers,” says Pablo Marco, head of mission for Doctors Without Borders/Médecins Sans Frontières (MSF) in CAR.

Since the end of January, fighting around Gondava and Ouandago, along the border with Chad, has brought instability to the region. The Chadian rebel group, the Popular Front for Recovery (FPR) is fighting against Chadian and Central African forces. Some 3,000 displaced people have arrived in the villages of Farazala, Ouandago, and Nana-Outa, in addition to the 3,000 people already sheltering in Kabo.

“During the first few days of the fighting, some of the wounded were admitted to our hospitals, including two women who had been raped, but now many more cases are being reported,” says Marco. “People [were] left with nothing but the clothes they were wearing, and they are unable to go back to their fields, so there is an urgent need for food and relief items.”

Pake, 28, arrived at MSF’s hospital in Kabo after her home in Ouandago was attacked and she was raped. She says, “My family and I were sleeping at home when an armed man came in. My husband fled, frightened. My three elder children also managed to escape, but [the attackers] took my baby and threatened to kill him. They threw him [to the ground] and then raped me. I gave them all the money I had. I could not go to the health center. My body is in pain and I feel insecure and frightened. My heart is pounding and I cannot sleep at night.”

MSF staff in Farazala, about 12.5 miles (20 kilometers) from Ouandago, have managed to reopen the health center to provide basic medical care to the thousands of displaced people who are arriving in the town. Most are sheltering in the empty homes of people who had previously been forced to flee.

So far MSF staff in Farazala is working without backup, as MSF support teams have been unable to reach the town to distribute food and relief items, to assess mental health needs among the displaced people, or to vaccinate children.

However, an MSF team has succeeded in reaching the villages of Ouandago and Nana-Outa to distribute relief items such as plastic sheeting, blankets, jerry cans, cooking utensils, and hygiene kits to some 700 families.

In a recent report, MSF warned that CAR has been suffering from a chronic crisis for years. In "Central African Republic: A State of Silent Crisis," published in December 2011, MSF warned that the medical care available is inadequate for the country’s enormous medical needs. CAR ranks fifth on the list of countries with the highest mortality rates from infectious and parasitic diseases. This is the result of seasonal epidemics, a poor health system, and a financial downturn on top of years of conflict and displacement.