CAR: "There are children that die but we succeed in keeping many others alive." 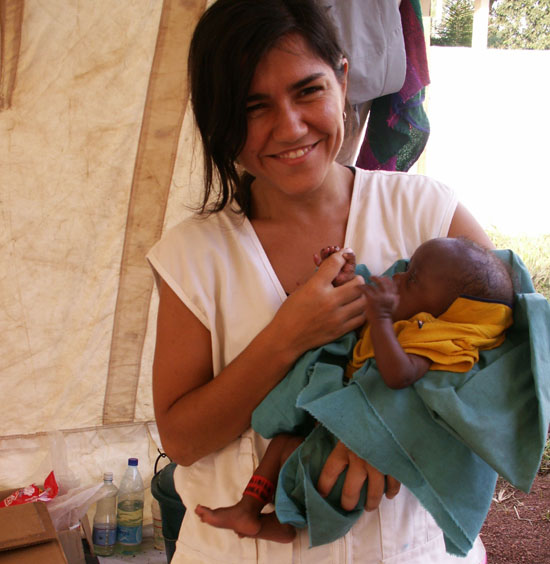 Carol Calero is a field physician for Doctors Without Borders/Médecins Sans Frontières (MSF). Currently she is working in the nutritional emergency in southwestern Central African Republic (CAR). In this interview, she talks about being in the heart of a health emergency and of the positive cases that keeps her spirits up.

We were extremely busy in the first few days of the emergency. We didn’t see too many patients, but the ones we saw had serious medical complications. Because it was an emergency, we opened two therapeutic feeding centers as fast as possible, and we’ve been able to respond to the crisis swiftly and adequately.

What were your first impressions?

Seeing children coming to us who were severely malnourished was tough. In some ways, we felt that this had been going on for several months. We treated these children, but they were in such an advanced stage of malnutrition that there was not much we could do for them.

What is the situation at the feeding center now?

Many of the children arriving now have been sick for months, but now that their families realize we are here—and that they can get free medical care and treatment—they have started coming to our feeding centers. But many of the children are in a very advanced stage of the disease. In fact, many children are too weak to receive outpatient treatment and the number of children we are admitting to the therapeutic feeding center is much higher than in other emergencies where MSF has worked.

The population density here is quite low—compared to places where MSF usually works in emergency situations—but the children are in a more critical condition. We are trying to reach other children who are not yet sick so that if and when they do fall ill, they come to us for treatment in time.

What kind of work are you involved in?

We have opened two therapeutic feeding centers where we treat children who in are in critical condition and we also have 11 outpatient centers in different villages in the surrounding area. In each outpatient center, we are helped by awareness raisers—teams of people travelling to nearby villages to tell parents about the treatment their sick children can access. Once we have identified them, children who are suffering from severe and moderate malnutrition are included in the program. We transfer children in a serious condition to the therapeutic feeding center by car and—when they have recovered—they return to their homes. Children who don’t need inpatient care—but are still sick—take their treatment home with them and come to the clinic every week to get more treatment.

In addition to malnutrition, many children are suffering from other diseases?

Yes. Many of the children here have malaria, respiratory infections and diarrhea, all pathologies common to other child malnutrition projects. The thing here is that many children come to us in very advanced stages, mainly the ones suffering from respiratory failure. We have seen children who have been sick with pneumonia for weeks and this has delayed their recovery. Their nutritional condition lowers their defenses which further exacerbate all the pathologies. Other children have advanced cerebral malaria or severe diarrhea that cannot be cured so easily.

Despite this, most of the children recover and MSF is seeing some positive outcomes?

One of the most positive stories is René, one of the first children admitted to the center. When he was admitted, he had very, very advanced kwashiorkor (a virulent form of childhood malnutrition characterized by edema, irritability, anorexia, and an enlarged liver) and tuberculosis. It took us nearly two and a half weeks to reduce his edemas. Everybody focused their attention on him because he initially rejected the treatment. But one day he started improving and when he left he was really fat. He weighed far more than the goal we had set for him.

People have no access to health care whatsoever, and when they do they have to pay for their care.

There is also the case of two brothers named Mesman and Teofil, from Gatzi. They arrived in a very serious condition. They were so bad that we thought one of them was suffering from some sort of disability as he did not talk or react at all. But as his condition improved, he started laughing, running and playing.

These cases justify our presence. There are children that die but we succeed in keeping many others alive.

What will happen when MSF leaves?

We are in the process of analyzing the potential repercussions. Although we’re here to respond to an emergency situation and treating the most severe cases, the region suffers from chronic problems that require sophisticated answers. People have no access to health care whatsoever, and when they do they have to pay for their care. This is extremely difficult because people have a minimal income, a situation that has been exacerbated by the shortage of work at the diamond mines. In addition, people’s diets depend on cassava because it is so accessible and affordable. However, cassava lacks the nutrients the organism needs, particularly the nutrients required for childrens’ organisms to be healthy. This is an obstacle that is difficult to overcome.

People here say that they have been like this for years and that what happened to the mines is only the last straw. In Boda, a relatively large town, there is only one doctor. In Nola there is not even one.