Caring for Tens of Thousands Displaced by Violence in Southeast Niger

The attacks that occurred on June 3, 2016 in Bosso, a town in Niger's Diffa region, forced tens of thousands of people to take to the road. For many, it was the second time they had been displaced by violence related to the Islamic State’s West Africa Province (ISWAP), also known as Boko Haram.

In the first few days following the attacks, the inhabitants of Bosso and the surrounding areas set off on foot to search for a safe place to settle. Climate conditions in the region are extreme, with temperatures often rising above 110 degrees Fahrenheit.

According to the authorities, 40,000 people fled after the attacks. The primary concern of humanitarian organizations has been locating and providing assistance to the displaced. Doctors Without Borders/Médecins Sans Frontières (MSF) and other organizations in Diffa identified three main sites where those displaced have moved: the village of Kintchandi and the Garin Wanzam site (both located some 30 miles to the west of Bosso); and Diffa, the administrative center of the region, which is 62 miles away from Bosso. 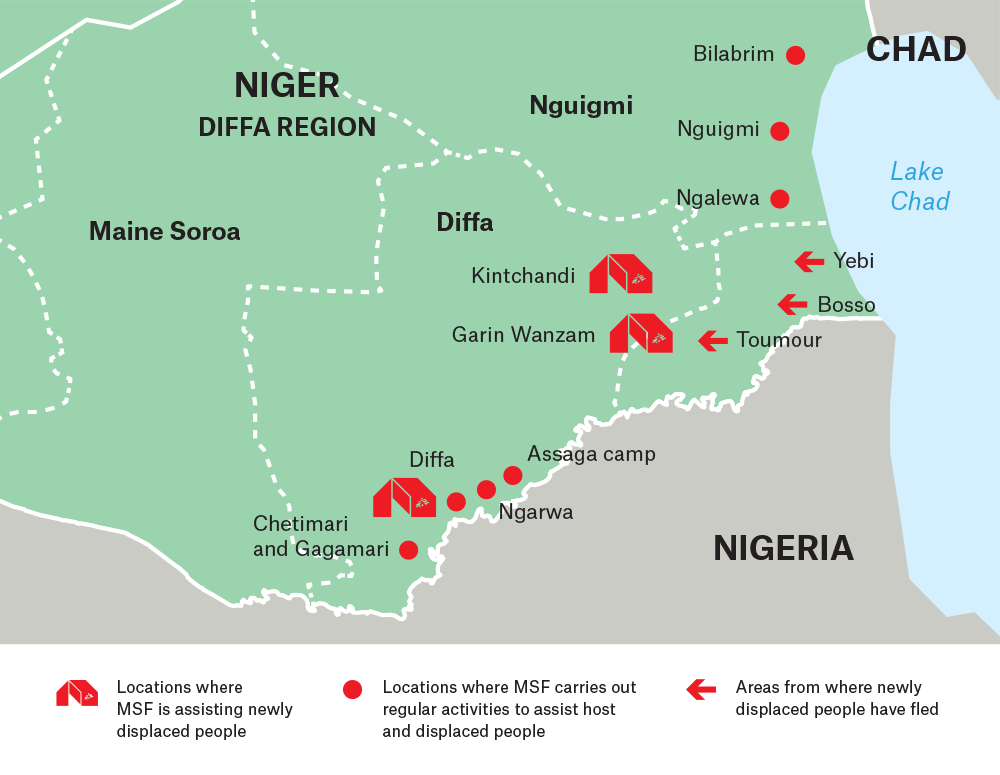 Since June 7, MSF has been providing safe water and health care to tens of thousands of displaced people living in Kintchadani and at the Garin Wanzam site. The organization also carries out similar activities in the city of Diffa, where there are about 7,100 displaced people, according to the authorities.

"The priority need is water," says Souleymane Ba, who is coordinating MSF’s activities in Garin Wanzam and Kintchandi. "Two vehicles equipped with several 120-liter buckets are going around the sites, but it is not enough. We will install water pockets at three locations that will be permanently supplied by wells at another location."

MSF also established two mobile clinics at both sites and supports the Kintchandi health center, where it carries out more than one hundred visits per day. At the outset, the teams treated many people for dehydration.

In Diffa, most of the displaced are living with host families. A small number found refuge in schools and on plots of land that the inhabitants made available to them. "Those arriving do not have access to free health care," explains Omari i Mwinyi, who coordinates MSF activities in the city. "They need water, food, and shelter." MSF also works in two health care centers located in areas highly populated with displaced people.

Much Remains to be Done

"Our concern is that there are still a lot of people who have not been located, and no one can say for sure that people are going to remain where they are," explains Elmounzer Ag Jiddou, MSF head of mission in Niger. "People are still moving because of insecurity and because they need to find a source of income. They are divided between visiting the sites where there is humanitarian assistance and going somewhere where they will be able to help themselves, [for example] where they have their field, or in the village."

It is difficult to provide assistance to a population in motion. The construction of latrines, for example, requires several weeks of planning, and poor sanitation conditions may result in diseases or even epidemics. The rainy season is approaching, with its stagnant water and elevated risk of malaria cases, which makes matters worse. "There must be coordinated action by the aid organizations and the authorities in order to enable the refugees to gain stability, and be better placed to receive help," says Ag Jiddou.

Before the attack in Bosso, the region of Diffa had already received more than 240,000 displaced people who fled violence from the Islamic State's West Africa Province. MSF carried out more than 16,500 health care consultations in the region during the month of May, and also provides assistance in the mother and child health care center in Diffa, in the health center in Ngarwa, in the Assaga camp, and in the commune in Chétimari (all located in Diffa District), as well as in several health care centers located along the shores of Lake Chad (in Bilabrim, Ngalewa, and Nguigmi). For safety reasons following the attacks in Bosso, MSF stopped activities in Yébi and Toumour, where the organization carried out on average 6,300 consultations per month.

MSF clinic in Gari Wanzam where thousands of newly displaced people from Bosso district have have sought refuge in the last days.
Anne Boher