Three months after a coup in CAR, the country remains gripped by a humanitarian emergency made worse as the international community looks on with indifference. 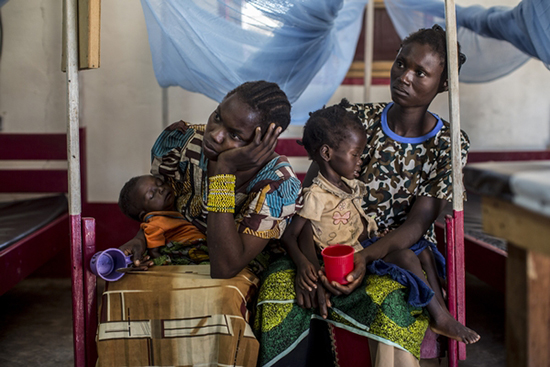 Mothers and children at Paoua Hospital

CAR, plunged into chaos following a coup on March 24, led by the Seleka group, remains politically unstable, with its population much more vulnerable. United Nations agencies and many nongovernmental organizations, citing insecurity, have withdrawn to the capital, Bangui, leaving most of the country without vital aid. During the rebel offensive, hospitals and health centers were ransacked and medical staff fled. Without doctors, medicines, or medical supplies, the majority of people in CAR have no access to health care. According to a report released today by MSF, the people of CAR have effectively been abandoned, precisely when they most need assistance.

The international community—including the UN, the European Union, and the African Union—must keep CAR at the top of their agendas and support the fragile country, MSF said. The humanitarian community must also maintain its commitment to CAR, in spite of the current political and security situation, and allocate adequate resources to respond to the medical and humanitarian crisis gripping the country.

Malnutrition and preventable diseases are rife, with malaria the leading cause of death in the country. A large-scale mosquito net distribution planned by the Ministry of Health has been canceled because of the insecurity. MSF teams are witnessing alarming numbers of malaria cases, which are 33 percent higher than the same period last year.

"We are facing one of the worst years in terms of the impact of malaria," said Ellen van der Velden, MSF’s head of mission in CAR.

Even prior to the coup, CAR was a country in crisis, with mortality rates well above the emergency threshold in several regions (see MSF’s special report from December, 2011, Central African Republic: A State of Silent Crisis).

According to the latest MSF report, the violence and looting has also disrupted the country’s drug supply system. Approximately 11,000 people living with HIV have had their treatment interrupted and most babies born since December 2012 have likely not received routine vaccinations, increasing the risk of outbreaks of diseases such as measles and meningitis.

While a number of UN agencies and nongovernmental organizations, including MSF, have been victimized by robberies and lootings, MSF has managed to operate nine medical programs in CAR throughout the crisis, and has expanded medical services to other areas. However, the scale of the needs is so great that more help is urgently needed.

International funding also remains an obstacle to providing assistance. Of the total funds requested in March 2013 by UN agencies and nongovernmental organizations to address the crisis in CAR, just 31 percent has been disbursed so far.

The transitional CAR government must also work to meet the urgent needs of the population, and to guarantee security conditions that will allow humanitarian organizations to assist people throughout the country.