"Violence has never stopped, it has always been present. Sometimes it is the result of the political conflict between the government and armed groups and sometimes it is different: banditry or intra-community conflicts." 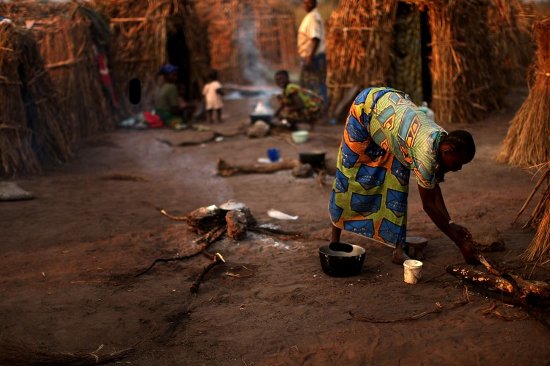 A woman cooks over a fire in a displaced persons camp in Kabo.

Despite the implementation of the peace process that is to end years of conflict, various armed groups, including the Central African Republic (CAR) military and rebel groups, are still fighting in various regions in the north. In addition, confrontations between several local groups and armed bandits compound insecurity and violence in the area. Gabriel Sánchez Ibarra has just returned from the country after working one year as MSF’s general coordinator for CAR and he shares his views and experience.

Could you tell us briefly why violence has intensified in CAR in the past months despite the peace accord?
Violence has never stopped, it has always been present. Sometimes it is the result of the political conflict between the government and armed groups and sometimes it is different: banditry or intra-community conflicts. For some months, some of the groups or rebel factions that signed ceasefire agreements in 2007 and 2008 have become active again after several disagreements linked to the peace process. This has triggered a renewed escalation of political violence.

What are the humanitarian and medical consequences these attacks have had for the population?
The most relevant consequence of the most recent attacks has been population displacements, a constant feature in CAR for some years now. This time it has affected some specific regions, where people have fled due to fear of fighting and potential reprisals. Some attacks have even taken place far from the fighting, in areas where people had once taken shelter. The displacements have also occurred during periods of vulnerability for the population—the onset of the rainy season, during the annual peak in malaria and the sowing season. These factors have not only made living conditions tougher where displaced people have taken shelter, but also prevented farming from taking place in certain areas, thereby threatening the already poor food security in the region.

What are we doing to address these needs? What are the difficulties we are facing?
Working in conflict areas is always complicated. Making sure that aid reaches those in need without jeopardizing the life of the patients or the teams is an ongoing challenge. These issues are exacerbated in CAR because the people MSF needs to assist during emergencies are located far away, in places where access is difficult and the population lives in fear, in terrible fear.

The needs to be addressed are always the most basic ones because being displaced and in the forest without any infrastructure whatsoever makes you very vulnerable. The displaced themselves and the traditional authorities required that the very few organizations present in the region provide primary healthcare, shelter, kitchen utensils and food. MSF has been able to assist negotiating with the armed groups operating in the area and coordinating actions with other organizations. Independence, access to the displaced, and security conditions need to be negotiated on a day-by-day basis.

What projects is MSF running in CAR?
The MSF project in Kabo has been designed based on two components. A stable one, with a 100-bed hospital and a broad range of services available to the people: an outpatient and inpatient department emergency surgery, programs on various diseases such as HIV and tuberculosis and mother and child health care.

The second component consists of rapidly responding during the emergencies or crises that periodically hit the region by being reactive and trying to provide shelter or health to the people directly affected by violence, epidemics or displacements. During the peaks in violence in the past few months, both our long-term and emergency components were fully operational. Despite violence, the MSF hospitals never closed, services continued and access to heath facilities was guarantees. But some of the population was unable to approach the hospital structure freely due to fear, fighting or displacement. This is why MSF has reached out to them by travelling to the roads and the camp sites and providing them with medical consultations, or distributing survival items.

How has this been done?
The displaced have settled very far from the roads, further inland than usual as they have been attacked even in the forest. This has made assistance and even contacting them difficult. This is why MSF has had to put in practice new types of mobile clinics travelling by bicycle and on foot to venture as much as 12km into the forest.

Are we seeing mental health problems among the population? Any intervention plans?
Obviously after three years of violence, people experience traumas, fear, and behavior problems. Some IDPs have told us that they’ve had to flee as many as three times in a year and a half and are very tired of this ongoing instability. Fear is always present when you talk to them: fear of physical violence and fear of seeing their houses burned down or looted. We have confirmed an increase in stress patterns and other unspecified conditions that could be linked to them: anxiety or insomnia, for instance.

MSF in CAR has a lot of experience in providing care for patients directly affected by violence, such as those injured or traumatized, and in handling health problems faced by displaced people. However, we have to improve the psychosocial component of the support we provide for victims. The service package that MSF offers in violence contexts is comprehensive, and during this month’s violence we also tried to develop the psychosocial component.

MSF is also treating sleeping sickness in CAR. What are the difficulties in treating this disease in a conflict setting? If people are affected by violence and are forced to flee, is it difficult to continue treating in the midst of a volatile context?
There has been a lot of progress in terms of adhering to treatment and nearly all our patients complete it. We have also improved detection of patients through active search in all the neighbourhoods of Batangafo and surrounding areas. The problem, however, is that we increasingly need to venture into traditionally unsafe areas where there are likely very high prevalence rates. We need to take into consideration that northern CAR has one of the highest rates of sleeping sickness in the entire world.

Regarding population displacements, the greatest impact is not on providing treatment but on follow-up and monitoring to help us detect relapses and follow up cure processes. However, in Batangafo this has not been possible yet due to the context.

Have we got problems to gain access to peripheral areas? What are the challenges posed by active case search?
The teams have been able to diagnose over 30,000 people and treat over 1,000 since 2006. Participation is enormous, exceeding 80 percent of the total number of inhabitants. The problem now is to transfer this strategy, which works and which MSF has been able to implement in other places, to other traditionally unsafe areas or where, due to the absence of State infrastructures, the population barely has access to health. The objective now is to grow in terms of diagnosis and treatment capacity without jeopardizing the program and venturing into villages that have been neglected during these past years due to violence.