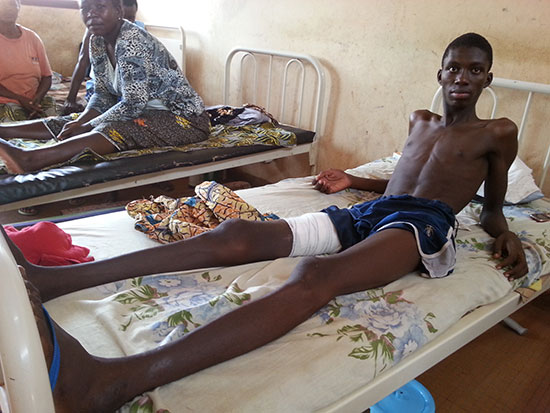 A young patient, wounded in the fighting between armed groups, is treated in an MSF facility.

MSF's facilities have been robbed and looted on multiple occasions, and entire communities are cut off from medical care due to insecurity. The new Seleka government must take responsibility for establishing control over lawless armed groups, in part to ensure access to health care, MSF said.

"MSF remains extremely concerned for the well-being and health of the population," said Sylvain Groulx, MSF head of mission in Bangui. “Even in times of peace, people endure daily hardships just to survive. Before the recent events, mortality rates related to preventable and treatable diseases were already above emergency thresholds in many areas of the country. The insecurity today is pushing already fragile coping mechanisms to the limit.”

MSF's medical teams were forced to evacuate the towns of Batangafo and Kabo due to robberies and other violence. MSF was the only humanitarian organization providing medical care in the area, which has a population of more than 130,000 people.

Similar incidents forced MSF's international staff to evacuate the town of Boguila, where a skeleton team of national staff continues to operate a hospital.

Insecurity is preventing MSF from reaching other areas with significant medical needs, including the town of Bossangoa, where a public hospital was looted. Hospital staff reportedly fled.

MSF's facilities in Bangui have been looted multiple times since Seleka authorities took control of the city, resulting in significant losses of equipment, medicines, cash, and vehicles.

An MSF report, Central African Republic: A State of Silent Crisis, documents the appalling state of health conditions in the country, even during peacetime.

MSF has been working in CAR since 1997 and operates programs in five of the country's seven health districts. In collaboration with the Ministry of Health, MSF supports seven hospitals and at least 38 health posts. MSF projects in CAR provide malaria treatment, basic health care, HIV and tuberculosis care, treatment of neglected diseases, nutrition programs, vaccination, and surgery.