PARIS/BANGUI/NEW YORK—A retrospective mortality study conducted by the international medical humanitarian organization Doctors Without Borders/Médecins Sans Frontières (MSF) among Central African refugees in Sido, Chad, reveals extreme levels of death during a violent crackdown against the Central African Republic’s (CAR) Muslim minority. The study found that one in three families surveyed had lost at least one family member between November 2013 and April 2014. The survey documented that 2,208 people died while still in CAR, of which 95 percent died from gunshot, machete, grenade, or other blast wounds.

Between December 2013 and January 2014, several hundred thousand people fled abuse and violence in CAR, seeking refuge in Chad and Cameroon, according to the UN High Commissioner for Refugees. Epicentre, MSF’s epidemiological research center, conducted interviews with 3,449 refugee families in Sido to understand the levels of violence during the period of November 2013 to April 2014. Nearly 8 percent (2,599 people) of the 32,768 people who initially composed the 3,449 families questioned died. Thirty-three percent of the families surveyed had lost at least one member. Twenty-eight percent had lost at least two. More than half (57%) of the families interviewed in Sido were originally from Bangui, the place of departure of most of the refugee convoys. 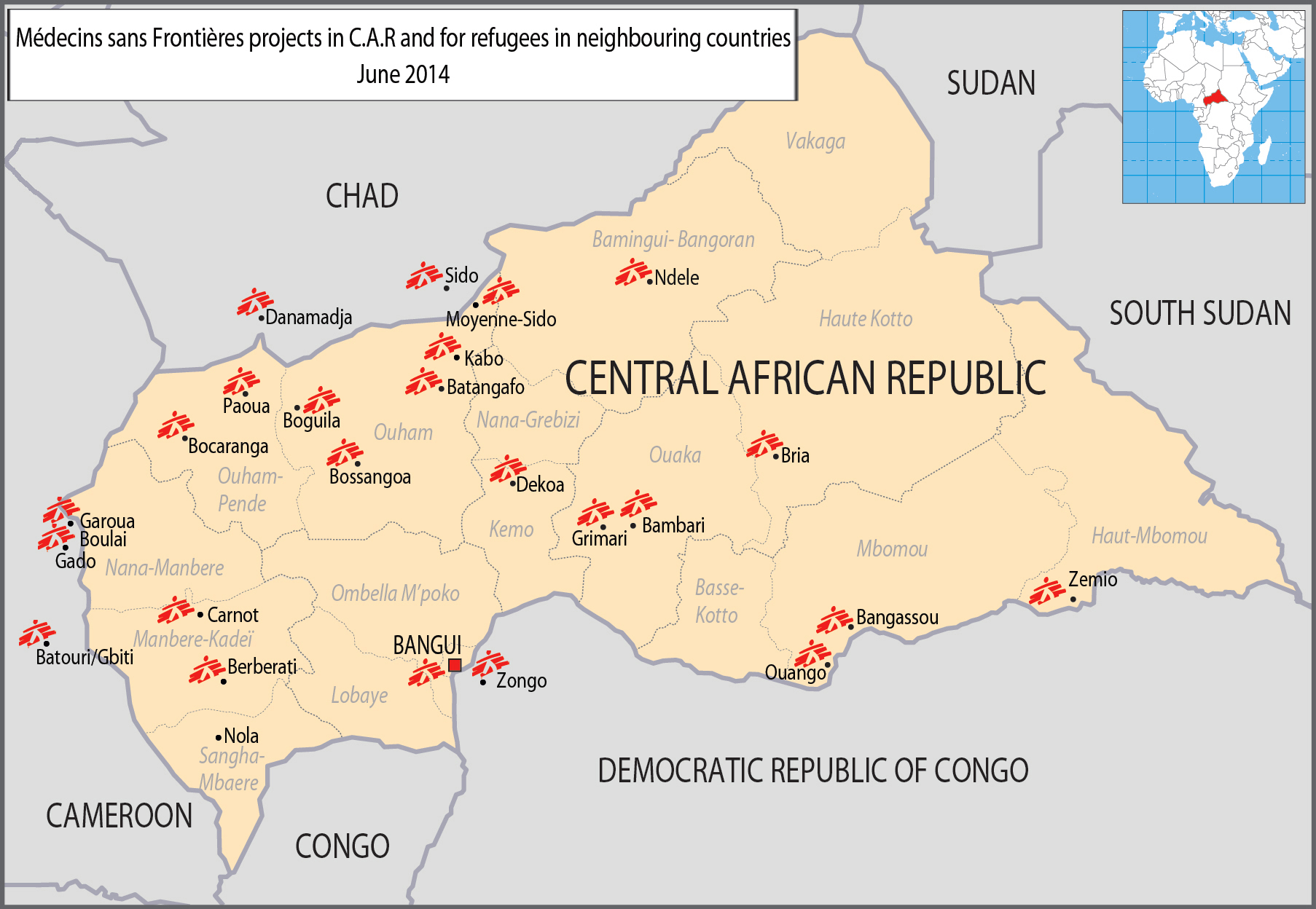 “The shocking levels of violence documented in our study should not leave the impression that the worst is over,” said Dr. Mego Terzian, president of MSF. “MSF teams continue to work inside enclaves in the Central African Republic where thousands of people remain trapped, protected by international forces, but with no chance to escape.”

Nearly 85 percent of those who died in CAR before any attempt to flee were men (1,863). However, the violence did not spare women, children or the elderly. Two hundred and nine children under 15 and 227 people over the age of 60 died because of violence.

The survey data and the statements gathered by MSF teams in CAR, Chad, and Cameroon highlight the breadth of the violence that the populations experienced both in the CAR and as they fled the country. Three hundred twenty-two people died during the transfer to Chad. Seventy-eight percent of these deaths are attributable to violence.

Read The Report: For Central African Refugees in Chad and Cameroon, "Suitcase or Coffin"

Today, nearly the entire Muslim population in the western half of CAR has left in just a few months. Several enclaves under the protection of armed international forces in Bangui, Carnot, Boda, and Berberati still shelter a few thousand Muslims, although their living conditions are very precarious and they have few prospects. Now confined in ghettos, this portion of the Central African population still faces daily threats.

On July 7, an attack and fighting around a Bambari church housing displaced people resulted in five deaths and many wounded. Most people believe it is too dangerous to go to the hospital or move around town. While the hospital remains functional, there is little access to it, and MSF has referred 14 emergency cases by aircraft and ambulances to hospitals in Bangui and Bria. The situation around Boguila, in the northwest, remains volatile and lawless. In the past few weeks, local communities have been violently targeted by groups of armed bandits entering the area, with more than 10,000 people now displaced.

The Chadian government’s decision, in May, to close its border and the inadequate humanitarian aid deployed in Cameroon impede Central Africans from seeking refuge in neighboring countries. In June, MSF teams recorded more than 1,700 new arrivals in Sido. They included people arriving from CAR or from other transit camps in Chad, who had come to join the family members from whom they had been separated. Some had to pay to cross or walk for hours to find more “permeable” crossing points. Others came under fire.

On June 13, four people were killed as they tried to cross the river, heading for Sido. On July 3, 100 people, victims of an attack on their village in the CAR, were not allowed to cross into Sido. At least five of them were wounded by gunfire during the attack, including a woman and three children. They had to walk for 24 hours before reaching Bethel, a Chadian border town, where MSF treated them and transported them to the Goré hospital, after negotiating with the authorities, who finally approved the transfer.

After several months of displacement, the Central Africans who reach Cameroon arrive exhausted and traumatized. Their health status is alarming, particularly in terms of nutrition, with nearly half of the children suffering from malnutrition.

“There are still massive deficits in the distribution of aid to the hundreds of thousands who managed to escape the violence and reach Chad or Cameroon,” said Dr. Terzian. “The bare minimum that can be done for this population that has suffered incredible violence, lost family members, and been uprooted from their homes, is to provide them with humanitarian assistance.”

MSF has been working in CAR since 1997. More than 2,300 people work with MSF in medical-surgical projects located in more than 15 Central African towns. MSF also works in the Central African refugee camps in southern Chad and eastern Cameroon.