In Central African Republic, the Violence Has Ended But the Emergency Continues

MSF Head of Mission Serge St-Louis discusses the situation in CAR, where conflict has jeopardized the provision of medical care. 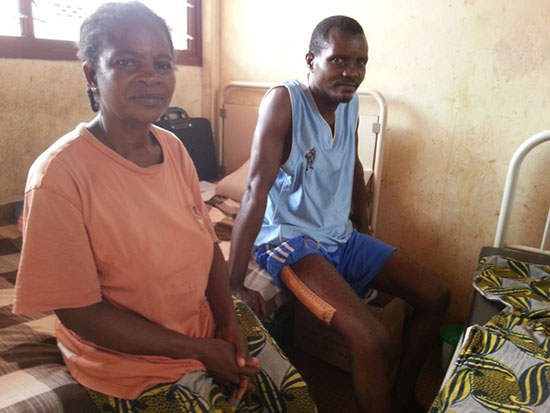 Patients at the community hospital in Bangui, where MSF treated people wounded in conflict.

Serge St-Louis just returned from nine months as Doctors Without Borders/Médecins Sans Frontières (MSF) head of mission in the Central African Republic (CAR). He was there in late 2012, when Seleka, a new coalition of Central African rebel groups, took control of several towns before finally entering Bangui, the capital, in late March. Here, he updates us on the post-conflict situation, including the issues and outlook for the country, its health care system, and MSF.

“At the height of the crisis, confrontations, shootings, and abuses occurred daily. Today, tension and violence have subsided and we are now in a particularly delicate phase—a sort of false calm that is both fragile and potentially explosive. Seleka’s two main groups will have to begin negotiations to establish an imminent power-sharing arrangement. There could be friction and clashes within this young coalition.

The CAR context has also become more complex. Seleka undertook a massive recruitment campaign four or five months ago, bringing in foreigners, mercenaries, and, unfortunately, child soldiers. On March 24, approximately 3,000 men entered Bangui and recruitment continues. There are two sets of leadership—the official Central African Armed Forces (FACA) and the de facto Seleka. Many outside actors have also been involved in this conflict, with Chad, Sudan, Libya, and others supplying men, weapons, and uniforms.

As a medical organization, we are very concerned about the unmet needs among a population that was already very vulnerable prior to the Seleka offensive. There are thousands of displaced persons who now live in extremely precarious conditions, without medical care, shelter, food, or water. The health situation is critical in several regions. There are serious shortages of drugs and supplies and there are no health care personnel in the medical facilities. Based on our latest admission figures, the seasonal epidemic of malaria, which is endemic in the CAR, appears to have begun and will surge in the rainy season. Medicine will arrive, but it will be a challenge to distribute it on flooded, impassable roads and in areas lacking security and health care workers. Food stores have also been looted, the fields cannot be maintained and, although it is too soon to tell, nutritional status could deteriorate.

MSF is working throughout CAR, regardless of which party to the conflict is controlling the particular region. In Carnot, in the southwest area of the country, for example, the situation remains calm for now. The Seleka does not know this area very well. It has no support or economic interests there, given that the diamond mines are not currently operating. However, several men were recruited locally to maintain a minimal presence in this “gray” area, where we must also take account of other actors, including members of the former presidential guard who are now unemployed, poachers, highway bandits taking advantage of the chaos, and armed groups from neighboring Cameroon. When economic activity resumes, the risk of theft and looting—including of international NGOs—will increase. It may now be possible to launch the MSF measles vaccination campaign scheduled prior to the conflict, to begin in Carnot, but only in the city. Given the lack of security in surrounding areas, it will be more complicated to work in the outskirts. We have also decided to transfer part of our activities in Paoua to various partners. However, while we may be able arrange this transfer working with local and, possibly, regional authorities, it will be more complicated at the national level. Last, on May 1, our teams treated 850 patients at the Bangui community hospital, most of whom had bullet wounds. We have been supporting the emergency and surgery departments there since late March. We expect to withdraw in the next few weeks. We will draw up an organizational and action plan so that we will be able to resume our activities immediately in the event of new spikes of violence and based on needs.

The NGOs—including MSF, which has become a leading health actor in the country—will have a critical role because the emergency continues. We must assess the risks and determine how we can best meet the needs.”

Life expectancy in CAR is 48 years, among the lowest in the world. At a time when the population is in great need of help—particularly medical assistance—the latest looting and destruction of health care facilities will create additional obstacles to obtaining care for people who have already suffered greatly. MSF is particularly concerned about patients who have had to stop their HIV/AIDs and/or tuberculosis treatment.

During the crisis, MSF was targeted several times by armed groups and the teams have experienced looting, theft, and threats. MSF has called on all parties several times to respect patient access to health care, the safety of medical staff, and the integrity of the health care infrastructure.