In Chad, Diseases are Spreading as Food Supplies Dwindle

Food and water shortages in Chad are exacerbating malnutrition and contributing to the spread of deadly diseases like measles and meningitis. 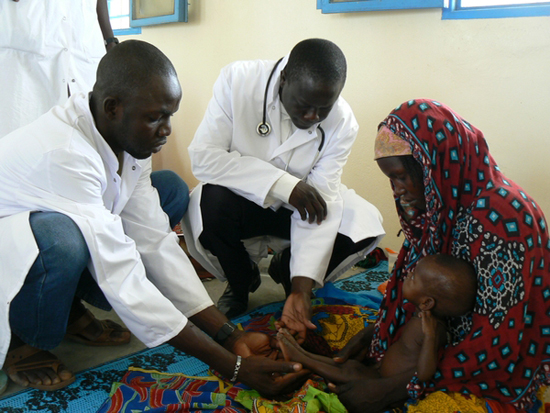 Food and water are scarce in Chad’s eastern city of Biltine, and some families are down to their last two weeks’ worth of food, says Dr. Kodjo Edoh, Doctors Without Borders/Médecins Sans Frontières (MSF) head of mission in Chad. As a result, malnutrition rates among children are soaring. Elsewhere in the country, measles and a deadly epidemic of meningitis have broken out.

Even in a "good" year in Chad many people struggle to get hold of sufficient food during the April-to-September lean season, and thousands of children become malnourished. But no one is expecting 2012 to be a good year. Last year, the rains did not come, and food prices are on the rise—the Ministry of Agriculture says prices are almost 25 percent higher than this time last year. In Chad—as in the other countries across Africa’s Sahel region—all it takes is lower-than-average rainfall, or higher-than-average food prices, to tip parts of the country into a major nutrition crisis.

Cutting Down On Meals

In the city of Biltine, in the east of Chad, some people are already down to the last of their food supplies, although it is still only April. "Many families only have half a month’s worth of food stocks left, and have had to cut down on the number of meals they eat each day," says Dr. Edoh. "The variety of food has also dwindled."

It is not only food that is scarce—there is also a dangerous water shortage in the Biltine area. "Some people are walking for over seven hours to fetch water," says Dr. Edoh. "It is a major concern: the water shortage has a direct link with malnutrition in children."

In February, an MSF team discovered that one in four children under the age of five in Biltine was acutely malnourished. In response, MSF opened an emergency nutrition program in April that enrolled 67 children for treatment in its first week, eight of whom were so seriously malnourished that they are receiving intensive inpatient care. The program will run for the next nine months.

"Our first priority is to reduce the mortality rate of the one in four children under five who are acutely malnourished by providing them with medical care, including therapeutic food," says Dr. Edoh. He also stresses the importance of the World Food Program (WFP) starting general food distribution to the population of Biltine as soon as possible. "We need to prevent the remaining 75 percent of the children from becoming malnourished as well. There’s a real, urgent need for these food distributions."

Health care is not widely available in much of Chad, making people particularly vulnerable to malnutrition, as well as to outbreaks of infectious diseases. At MSF’s long-term project in Am Timan, in the southeast of the country, malnutrition rates are climbing rapidly, exacerbated by an outbreak of measles.

"Between January and March we admitted 1,600 children with malnutrition—almost twice as many as at the same time last year," says Dr. Edoh. "To make things worse, we are experiencing a measles outbreak. We are really concerned, because measles increases the likelihood of children becoming malnourished."

An increase in meningitis cases has been reported in 12 districts across Chad, and 7 discticts—Am Timan among them—have had to declare outbreaks. Nationwide, 3,190 meningitis cases had been recorded by the end of April, and 145 people have died from the disease. MSF organized vaccination campaigns in Oum Hadier, Moissala, Massakory, and Lere, targeting approximately 640,000 beneficiaries from the ages of 1 to 30 years. Additionally, MSF deployed teams to provide medical supplies and treatment to meningitis cases.

No one expects 2012 to be a "good" year for Chad, but MSF teams are doing all they can to prevent it from becoming any worse.