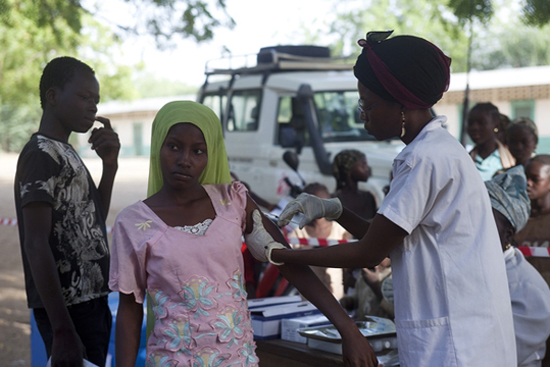 Nutrition assessments carried out by MSF have revealed alarming levels of malnutrition among children in multiple districts of the country. An expanding meningitis outbreak in Chad is also threatening the population and requires an urgent response.

“We can see clearly that in some parts of Chad there are already very alarming rates of malnutrition among children,” said Dr. Kodjo Edoh, MSF’s head of mission in Chad. “We are concerned that this situation might also be affecting other districts in the country and we urge the Chadian government and humanitarian agencies to investigate and act.”

The discovered rates are of great concern because the month of February normally features the lowest malnutrition rates of the year. A considerable deterioration has taken place since UNICEF collected data in the same region in August and September 2011, which showed 4.6 percent for severe malnutrition and 18 percent for global.

Several factors appear to play a role: a below-normal harvest, crop-destroying pests, and a plummeting economy due to reduced remittances from Libya.

Elsewhere in Chad, MSF recently began a nutrition intervention in Yao, in Batha region, responding to high levels of severe acute malnutrition there. The program features inpatient and outpatient care, as well as primary health care and vaccination services. Health assessments are taking place in the regions of Hadjer Lamis, Abéché and Ouaddai.

Meanwhile, a meningococcal meningitis outbreak has struck the country; eight districts have surpassed the epidemic threshold for the disease and four other districts are on alert.

In the eastern Oum Hadjer district, a total of 209 meningitis cases and 8 deaths have been reported to date. The epidemic threshold was passed during the week of February 12. In the southeastern Am Timan district, 147 cases and 8 deaths have been recorded. Epidemic levels were reached there during the week of March 18. The numbers of meningitis cases in the districts of Am Dam, Abou Deia, Lere, Dono Manga, Massakory and Bedjondo have also reached epidemic levels.

In response, MSF will launch, in collaboration with the Ministry of Health, mass meningitis vaccination campaigns in Oum Hadjer, Am Timan, Lere and Pala districts in the coming weeks targeting over 900,000 persons aged 1-29. Treatment for people who have fallen ill from meningitis will also be provided.

The campaign will utilize the new MenAfriVac vaccine, which confers longer immunity from meningitis for a wider section of a population than previous vaccines.

MSF has been working in Chad since 1981. In addition to responding to nutrition and epidemic emergencies, the organization provides medical assistance in Am Timan, Moissala, Massakory, and Abéché.