Chad: Heavy Rains in the Midst of a Malnutrition Crisis 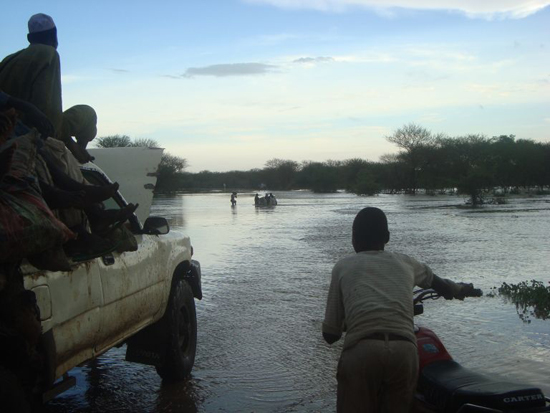 People try to access the roads in Guéra, one of six regions in Chad, in addition to the capital, N'Djamena, where MSF is running therapuetic feeding centers.

Areas in Chad have been hit by the worst flooding in more than 10 years while at the same time the country is experiencing an intense malnutrition crisis.

“The current rainy season in Chad is a curse and a blessing for the dry belt across the country,” said Dr. Kodjo Edoh, head of mission for Doctors Without Borders/Médecins Sans Frontières (MSF) in Chad, “in which people have been suffering from poor harvests and food insecurity.”

In the Sebab area, close to Am Timan where MSF supports a 100-bed hospital, approximately 6,000 people are affected. “The current state of the population in Sebab does not allow them to even light a fire. They just built a one-meter high wall with sand bags to protect part of their village and the health center, but water already passed over it,” said Jean-Francois Harvey, MSF project coordinator in Am Timan. “Their representative, whom I met in Am Timan last week, said that they sleep very little out of fear of increased flooding. Currently, they are surrounded by water on two sides. To reach MSF in Am Timan, they had to swim and use bikes.”

In Kerfi, where MSF supports a health center, approximately 5,000 people are affected by the floods. MSF provided bags to be used to elevate dams and is looking for further viable ways of doing a needs assessment of the affected population. “In July we saw a sharp increase in the defaulter rate of our patients from 8.5 to about 20.5 percent in Kerfi, as people living outside of town have been isolated by the floods and were not able to reach our health center. The people in Chad have been rather unlucky: reduced rainfall created the food crisis that will now be worsened by too much rain,” said Dr. Edoh.

The rainfall will be good for the pastoralist part of the population, who rely on animal products such as milk and meat, Dr. Edoh said. “They will be able to graze their cattle now and their nutritional situation will improve soon. The majority of people in some of the areas we work in, namely in AmTiman and Bokoro, however, are agriculturalist. They are planting their seedlings now, but some of them have already been washed away by the heavy rains and flooding. This might delay the first harvests planned for late October, November and thus possibly worsen the nutrition crisis.”

Another aggravating factor that comes with the rain is an upsurge in malaria cases. With limited access to treatment, malaria will be an additional threat to the lives of already fragile, malnourished children. “We will be faced with a deadly combination of malnutrition, malaria and flooding,” Dr. Edoh said.

In Bokoro and Am Timan, about 1,914 children have been admitted to MSF’s nutritional program between May and July. “When we started our intervention in Bokoro in May, we saw many children die,” said Dr. Edoh. “Most of them presented late and many parents rather trusted in the power of traditional healers. With an increase in manpower and community health workers to sensitize the communities, however, we managed to improve awareness and acceptance in the communities and the quality of care given in the feeding centers. As a consequence, the mortality rate in our feeding program decreased significantly from 21 percent in June to five percent in July.”

The efforts continue, and MSF is opening new feeding centers and project sites in different places across the country.

Currently, MSF is offering feeding programs in the Hadjer Lamis, Batha, Guéra Chari Baguirmi, Ouaddai and  Salamat  regions in Chad,  as well as in the capital city of N’Djamena. Up to now, about 15,776 malnourished children have been admitted to MSF feeding programs since the beginning of the year, the overwhelming majority within the last three months.