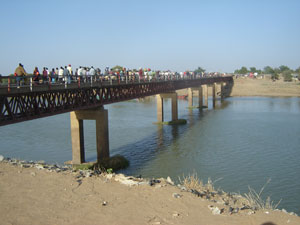 Some people have begun to return from Cameroon to N'Djamena now that a relative calm has returned to the capital.

Doctors Without Borders/Médecins Sans Frontières (MSF) continues to provide medical assistance to civilians affected by recent fighting in N’Djamena, Chad’s capital city, as well as to refugees who have fled the combat to Cameroon, and displaced populations in the east of the country.

Since Monday, the situation has remained relatively calm in the capital. Activity in the streets has slowly resumed, with more people and traffic every day. Street markets have opened again, but most shops remain closed. The price of basic commodities such as food and gasoline have increased sharply.

Since last Saturday, 110 wounded have been treated by MSF in Bon Samaritain hospital. It was one of the only medical facilities in N’Djamena that remained opened throughout the fighting. The day after fighting ended, on Monday, MSF teams started to assess the situation in the center of N’Djamena. Drugs were provided to several health structures and on Wednesday, another surgical team started to support the emergency ward of the Hôpital Général, the main hospital in the capital, where many wounded were treated during the fighting. In the past two days, the team has treated 19 wounded.

MSF has also begun to provide staff support and medicines to the Hopital de l’Union, in Chagoua, one of the neighborhoods most affected by combat. Most of the population fled and the hospital was closed during the last week, but now people are returning and the hospital has reopened. Five days after the clashes, there are still people with bullet wounds coming to the hospital. 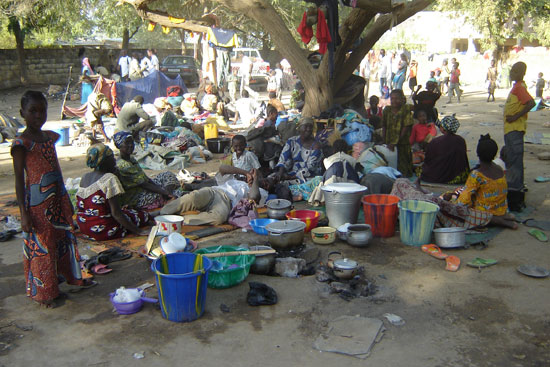 Chadian refugees congregate under a tree in Kousseri, Cameroon.

Tens of thousands of people have sought refuge in Cameroon, in the border town of Kousseri, 15 kilometers from N’Djamena. Refugees are scattered all around town, which makes it very difficult to give an exact number of refugees. Most of the families have settled under the trees, with very few resources. They mostly lack food, clean water, shelter, and primary health care. A number of people have started to return to N’Djamena. Some send family members to assess the situation in N’Djamena but still do not dare return.

An MSF team is supporting the emergency ward of Kousseri general hospital, where more than 80 wounded were admitted over the last week. Two other teams are providing primary health care to refugees in town and at a site called Madana, where thousands of refugees have gathered. At this site, MSF has also started distributing relief items and is performing water and sanitation activities.

Cargo planes with drugs, medical material, logistic supplies, and relief supplies have arrived to Cameroon and will be distributed in the coming days.

While MSF teams have been reduced in eastern Chad due to the unpredictable situation, MSF is continuing to work in the region where the teams provide primary and secondary health care, psychosocial care, water and sanitation to Sudanese refugees and to Chadian, both local residents and displaced people, in Abeche, Adre, Farchana, Goz Beida, Dogdoré, Guereda, Iriba, and Am Timam.