In western Chad, MSF is developing strategies to distribute supplementary food in order to prevent malnutrition rates from soaring. 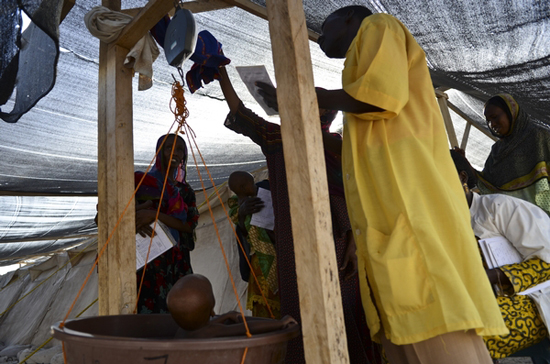 It is a huge task. Starting this past February, a team of some 50 people working with Doctors Without Borders/Médecins Sans Frontières (MSF) has been visiting villages in the semi-desert area around Massakory, the capital of Chad’s Hadjer Lamis region. The researchers are going from door to door to find children aged two or younger. MSF estimates there are around 5,000 in the area.

Over the coming months, these children will receive nutritional supplements. If their parents agree, the children are measured and weighed, and a detailed questionnaire is completed about their material circumstances, diet, and health. The children will then be monitored on a monthly basis. France Broillet, the coordinator of this study – the results of which should be ready by mid-2013 – explains what it is all about.

What is the purpose of this operational study?

We want to evaluate the impact of nutrition supplements on the health of children between six months and two years old. Children in this age group are most vulnerable to severe acute malnutrition and come to MSF hospitals in the greatest numbers.

Throughout the Sahel, each year MSF has to handle a large influx of seriously malnourished children. This "malnutrition peak" occurs during the lean period, when stocks of food from the previous harvest have run out and the adults are already working in the fields for the next harvest. Each year, this period also coincides with the rainy season and an increase in cases of malaria, respiratory infections, and diarrhea.

In this context, how do nutrition supplements help?

These products, which are rich in minerals, vitamins and trace elements, are designed for children who have moved on to eating solid food. All the ingredients contained in the supplements are essential for the child’s growth.

Unfortunately, the diet of most people in the Sahel region contains insufficient micronutrients. This imbalance is exacerbated during the critical lean period, when both the quantity and the quality of the food intake decreases, and most households are forced to reduce their consumption of dairy products and vegetables.

MSF has already proven the effectiveness of preventive distribution in Niger. Why does it need to be proven in Chad?

In Niger, mortality among children who received nutrition supplements was reduced by 50 percent. The study in Chad concerns the duration of the distribution. In the Tourba area, MSF will distribute supplements during the lean period, from June to September, as it usually does. Meanwhile, children around Kamerom and Karal will receive the supplements all year round, starting in March 2012. We want to see if it’s worth acting earlier, and if extending distribution throughout the year reduces the incidence of severe acute malnutrition during the lean period.

Do you believe the Hadjer Lamis region is on the verge of a major nutritional crisis, as in 2010?

Everyone is concerned about the coming months. The last harvest was poor and some households have already used up all their stocks of food, although the people we’ve spoken to still have enough to eat. We’ve only found a minority of children suffering from malnutrition, and they’ve been referred to the outpatient health centers and MSF’s hospital in Massakory.

People adapt to make it through the lean period. Many men, for example, have gone off to work in the fields near Lake Chad. While this type of temporary migration isn’t unusual, these adaptation mechanisms now tend to be used every year, rather than as an exception.

How will this study be useful for MSF and beyond?

It will give us a clearer idea of the best way of organizing the distribution of supplements. That’s important for MSF, as these preventive strategies make it possible to reduce the number of new cases of severe acute malnutrition and limit the opening of [inpatient] nutrition centers with hundreds of children – structures that require lots of space and qualified staff. The key point will be to find out whether or not sustained preventive distribution reduces the cases of acute severe malnutrition that arrive at MSF’s hospital during the lean period.

The results of the study will be shared and discussed with the Chadian Ministry of Health. If it becomes apparent that it is more effective to distribute supplements throughout the year, rather than just during the lean period, that will have considerable cost implications. It will be necessary to convince Chad and its donor organizations to introduce ongoing distribution on a wider scale.