The harvest is almost in, but MSF continues to admit new patients to its emergency feeding program in eastern Chad. 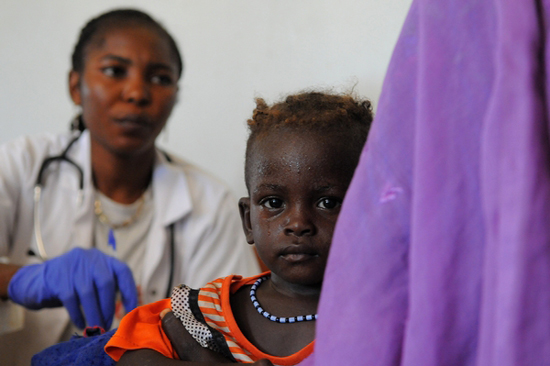 A young patient looks into the camera while an MSF nurse talks to her mother at an MSF feeding center in Angara.

It is early morning, and already hot, when two 4x4 vehicles pull up in front of a small health center in the village of Angara in eastern Chad. A crowd of women and children huddle under a small roof to avoid the beating sun as they wait for the weekly consultation to start. They watch patiently as the team from Doctors Without borders/Médecins Sans Frontières (MSF) sets up its mobile therapeutic feeding center.

"It is the second time I have brought my daughter to the feeding program," says Maryoma Abdallah, who squats in the shadow of a nearby tree. Like many other mothers, she has travelled a long way this morning by donkey to receive treatment for her malnourished daughter, Kadidja.

A Diet of Millet Porridge

“This year hasn't been good, and neither was last year,” says Maryoma. “At home all I have to give [my daughter] is millet porridge—I can’t afford to buy milk or fruit. My daughter was very weak, but thanks to the therapeutic food she receives, she is gaining weight again.”

Two-year-old Kadidja is one of more than 1,000 children currently being treated in MSF's emergency feeding program in eastern Chad’s Biltine district. Every week, mobile teams visit 11 remote health centers like the one in Angara.

In each health center the procedure is the same. As the mothers come forward one by one, each child is weighed, measured, and examined thoroughly by a nurse. Children on their first visit are tested for malaria. Where necessary, nurses prescribe medicine, which is handed out by the team’s pharmacist. Finally, each mother receives a weekly ration of therapeutic food for her child. This ready-to-use paste of peanuts and milk contains all the essential vitamins and minerals needed to help malnourished children regain their strength.

"We have made a small step forward,” says Marcus Bachmann, MSF’s project coordinator in Biltine. “The total number of children in our program has decreased—from 1,300 in June to 1,000 in September. But we are still seeing an average of 200 new admissions per week. That means there are still many severely malnourished children."

In Angara, outreach nurse Carole Antoine Riolobos screens the group of waiting mothers and children, looking for those who need immediate care. "As well as malnutrition, we see many sick children," she says. "The biggest problem is dehydration as a result of diarrhea. People here have no access to safe drinking water, and the children often drink directly from rivers.”

Riolobos stops in front of a woman in a bright green robe and examines the child on her lap. This little boy, Adil, is severely dehydrated and urgently needs intensive care. As the nurse begins preliminary treatment, she explains to Adil’s mother that her son is very ill and will have to be admitted to the hospital in Biltine. An MSF vehicle will take them to town when the consultations are over at the end of the day.

The Harvest Comes In

Since April, more than 500 severely malnourished children requiring intensive care have been admitted to MSF’s nutrition ward in Biltine district hospital. The team hopes the number of admissions will decrease as the harvest comes in and the annual “hunger season” comes to an end.

With no other health organizations working in the area, MSF will continue its emergency nutrition program until early December.

Though the hunger season may be drawing to a close, Bachmann warns that underlying problems remain. “Even if we have overcome this year’s malnutrition peak, there is no reason to be overly optimistic, because the structural nutritional crisis persists and can’t be solved by our emergency feeding program alone."

Every year, the people of Chad face recurrent food crises, putting tremendous strain on families and communities. While MSF’s emergency programs save lives, the underlying causes need to be addressed.

“The Real Emergency Is to Get Out of Emergency Mode.”

“There is a possibility that next year the same crisis will develop in the places where we are running our emergency programs this year,” says Stefano Argenziano, MSF’s country director. “The real emergency in Chad is to get out of emergency mode.”

Other MSF nutrition projects in Chad

MSF runs a 160-bed pediatric hospital in the town of Massakory in western Chad's Hadjer Lamis region. Since January, MSF has treated 7,800 severely malnourished children. Of these, 2,012 were admitted to hospitals and 5,725 were treated as outpatients. MSF works in six health centers in the district and provides nursing support at two others.

In Yao, central Chad, MSF opened a nutrition program in April and treated 1,559 severely malnourished children. An additional 388 children suffering of malnutrition and/or other childhood diseases were hospitalized in an MSF-run nutritional center in N'Djamena Bilala. The program closed at the end of September.

In May, MSF opened a program in Abu Deia, in northeast Chad, and treated some 1,400 children. The program was handed over to local authorities in early October.