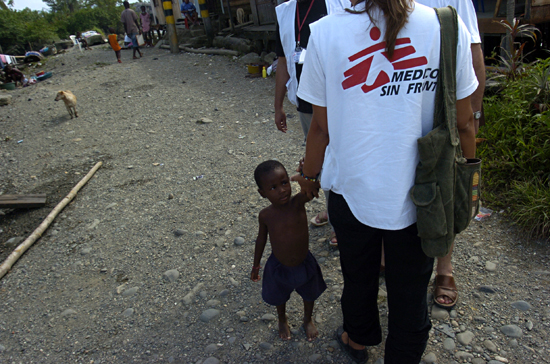 MSF is providing medical care to people displaced by recent escalations of the armed conflict in southwestern Colombia.

Armed conflict is intensifying across the Nariño Department, in the southwest of the country, where various armed groups are fighting for the land due to its strategic relevance, the presence of coca crops and economic interest. As a result of the fighting, 12,400 people have been displaced in Nariño in 2009 alone, according to official figures. Mostly, these people receive little or no care during the first days following their arrival.

Since June 2008, Doctors Without Borders/Médecins Sans Frontières (MSF) has provided medical treatment to those affected by the massive displacements. “We are providing care to those displaced, having fled the ongoing fighting between the armed actors,” says David Cantero, an MSF coordinator in Colombia.

The most recent displacement took place on October 14, when over 234 families and nearly 1,000 people fled rural areas within the Olaya Herrera municipality to take shelter in a school 30 minutes away. For the first three days, the displaced were forced to live without water and with only a little food, which the municipality managed to give them.

“This situation is recurrent and has completely overwhelmed the authorities’ response capacity at all levels. As a result, we find that we are quite alone when it comes to providing care to this population in the first moments,” says Ximena Di Lollo, an MSF coordinator in Nariño.

The people displaced have had to leave behind their homes and their livelihoods in the countryside. On many occasions, they have experienced tragic situations, bearing witnesses to the death of members in their community. In addition, when arriving at the temporary shelters, they are forced to endure overcrowded conditions where sanitation provision is scant and sometimes lacking food and clean drinking water.

“The needs of these people, particularly during the first days following their displacement, are massive—food, shelter, water and sanitation, let alone the need for mental health support identified in the course of our interventions,” explains Di Lollo.

Doctors Without Borders/Médecins Sans Frontières (MSF) has been working in Colombia since 1985, offering medical and psychological care as well as guidance and support to thousands of people affected by the conflict. The organization also responds, on an ad hoc basis, to epidemics or natural disasters. Currently, about 370 people are working in the projects that MSF is implementing in 13 Colombian departments.