A month after fighting between armed groups forced many to flee the area, Congolese MSF personnel have returned to their positions in Pinga. 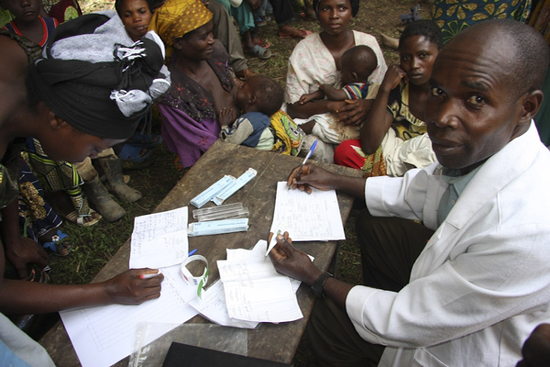 An MSF staff member at a mobile clinic near Pinga.

All of the Congolese personnel employed by Doctors Without Borders/Médecins Sans Frontières (MSF) in its Pinga project in the North Kivu Province of the Democratic Republic of Congo (DRC) have now returned to their positions, a month after fighting between armed groups forced many to flee the area.

The sudden mass departure of so many key staff had a crippling effect on MSF’s medical program and its ability to provide free quality health care to people caught up in the conflict. One health center in Mutongo was completely cut off for more than a month—medical activities only restarted last week.

Over the last month, the remaining skeleton team of international and Congolese staff was able—despite ongoing violence—to offer a minimal level of support to three of the four MSF health centers in the surrounding area. During this period MSF assisted more than 100 women in labor, helping to deliver their babies safely.

Because the local Ministry of Health personnel fled, the MSF team also stepped into the local hospital in Pinga town, performing more than 25 critical surgical interventions for patients suffering from gunshot wounds, obstetric emergencies, and other conditions.

“We’re relieved our Congolese colleagues are back and we can return to our full range of medical activities in Pinga,” said Grace Tang, MSF’s head of mission. “But there are still hundreds of thousands of people displaced from their homes due to the ongoing conflict in this part of [DRC].”