Dargai, Pakistan: "I know how important my treatment is"

Read about MSF's activities in Pakistan: 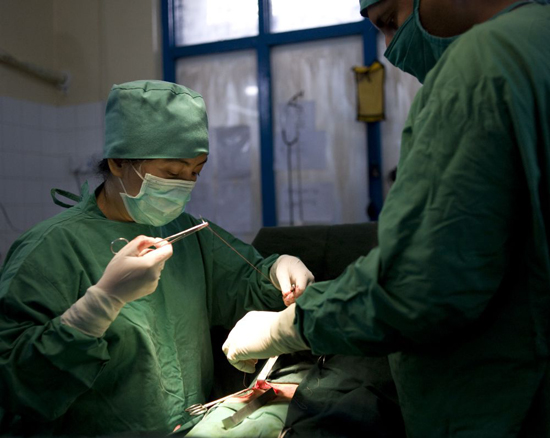 An MSF surgeon attends to an appendectomy patient at the hospital in Dargai, Malakand District.

In the remote Malakand District in Pakistan’s North-West Frontier Province, the local population is trapped in the middle of a violent conflict between the Pakistani army and armed opposition groups. Doctors Without Borders/Medecins Sans Frontieres (MSF) provides support to the regional hospital in the town of Dargai, where a MSF medical team assists in the emergency room, operating theatre and inpatient department.

It has been a busy morning in the emergency room of Dargai hospital where two young boys, badly injured in a traffic accident are being attended to by nurses and doctors. Meanwhile, scores of people are lining up in the waiting area to receive treatment.

In the hospital’s operating theatre, MSF surgeon Lynette Dominquez is completing the last sutures during an appendectomy procedure, before moving on to another patient. Although the majority of the surgeries here are elective procedures—like the 35-year old man whose appendix Lynette has just removed—around 38 percent of all the patients are emergency and trauma patients.

In the emergency room, Jonathan Starke, a MSF physician from South Africa, is in the midst of determining how best to treat an unconscious young girl named Rubina, who has just been rushed in. Despite her doting uncle carrying a bag containing dozens of bottles of pills, prescriptions and other medical documents, it does not make it easier for Jonathan and other ministry of health doctors to diagnose the underlying problem. Rubina suffered from convulsions and the family took her to a local dispenser who gave her an injection upon their insistence. She vomited, collapsed and lost consciousness.

"We have no idea what kind of injection it was and it is difficult to determine if her condition is due to the treatment, or if it is because of something else. This is a difficult case," Starke says.

As is the case elsewhere in Pakistan, patients are sometimes prescribed more medicines than necessary. Many patients often demand injections and several courses of medication, believing that a vast array of medicine constitutes a high level of medical care. The over-prescription of antibiotics in particular is a grave concern and it leads to patients invariably building up antibiotic resistance which means that fewer drugs are effective to battle infections.

“Antibiotic resistance is a huge problem. It means that you are left with a few remaining bacteria that are completely resistant to everything. And the next time when the patient gets sick there is nothing that will work because there are only a limited number of antibiotics available,” Starke says.

His next task is to join fellow MSF doctor Asmatullah Sayyed on a ward round at the inpatient department where Kareem, a 17-year old boy suffering from tuberculosis is being treated in the isolation ward. Kareem developed a persistent cough four months ago, suffered sudden weight loss and started feeling weak while he helped his father cultivate the fields on a farm.

As the two doctors assess his condition, Kareem’s bright green eyes light up. He says he is feeling better even though he is confined to his bed. "I know more about my disease and I know how important my treatment is because of the doctors. My father is strong man, and I hope to be like him when I get better here," Kareem says.

MSF started working in Dargai in December 2007, after setting up an emergency room and an operating theatre for trauma and elective surgeries. MSF also set up a maternal and child health clinic to deal with complicated deliveries, and built a 40-bed inpatient department.

MSF and the Pakistani Ministry of Health provide more than 700 medical consultations and assist around 150 deliveries take place every week in the Dargai hospital emergency room.

Between July and September 2009, MSF and the Ministry of Health treated 100 cholera patients in a cholera treatment centre. In August, 2,300 patients sought treatment in the hospital; 142 of them were suffering from violence related injuries.