Displaced in Iraq: "Those in Front of Me Have Made It. They are Alive."

Mariko Miller is an emergency nurse working with Doctors Without Borders/Médecins Sans Frontières (MSF) in Kirkuk, northern Iraq, where MSF teams are providing health care to people forced from their homes by armed conflict, and are supporting emergency care in two hospitals.

Many displaced people in Kirkuk have come from Hawija, a district southwest of Kirkuk that has been under the control of armed groups for over two years. More than 80,000 Iraqis have fled Hawija since August 2016, according to UNHCR, when military operations to retake the area intensified.

Families tell of the lack of food and fuel there, and of their perilous journeys to reach safety. Despite the scale of the displaced people’s needs, humanitarian assistance for them remains insufficient. 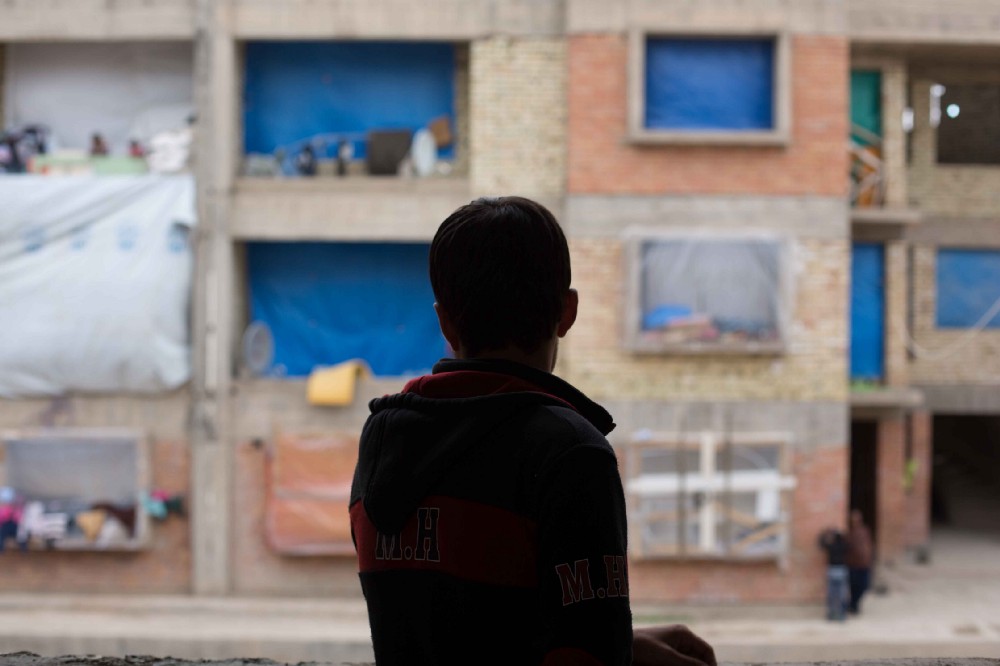 There are eyes darting around me in a crowd with a hyper-vigilance I haven’t seen before, and I’m watching a little boy in the arms of his mother. His hands are desperately grasping at the air around him with an acute hunger that is painful to observe.

There is a package of biscuits in a box in front of him and I watch his eyes focus in on them. He grasps the biscuits, then struggles with the plastic wrapper, and this image of him stays frozen in my mind. He is too young to be so hungry, too young to understand the decisions his family had to make to survive, or how this journey will define his future.

Around him people are scattered in groups on the ground, huddled around boxes of food, eating desperately after six days of hunger and two years of suffering under the control of armed groups. 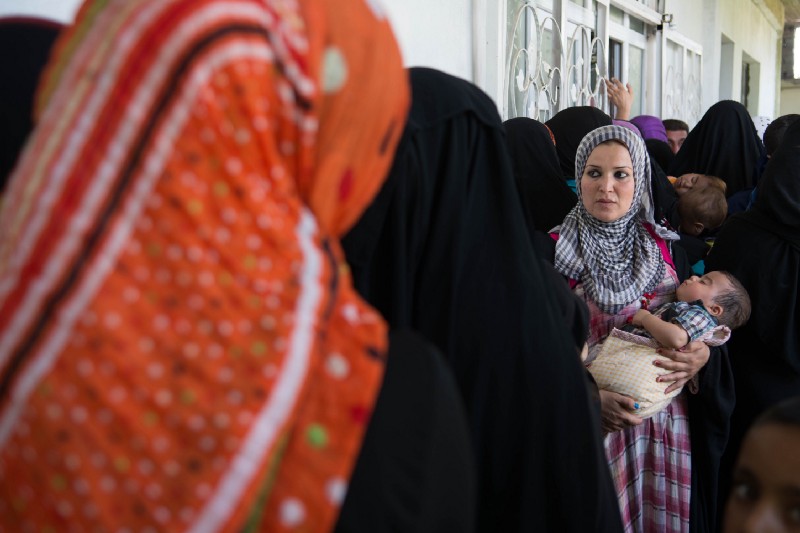 The boy is among 647 people who have arrived safely [in Kirkuk] from Hawija, a place suffocated by suffering. All of these new arrivals chose finally to leave Hawija on a journey that some people don’t survive. Those caught trying to flee can be executed, and those who make it out of the town have to travel 7 kilometers [4.5 miles] at night through a desert littered with land mines and improvised explosive devices, where snipers sometimes hit their marks.

The gratitude from our patients is remarkably humbling, and, as heavy as the air is in pockets here, we are all exactly where we need to be.

Many women who come to me have tears spilling from their eyes as they talk about the families they left behind in a place that’s been hit by aerial strikes and where an upcoming offensive is expected.

There is a young woman who lost her entire family yesterday when they stepped on a land mine in the dark, and her grief is so palpable, so horrifying.

There are many other people who sit silent, self-protective, eyes diverted, eyes that have seen more than eyes ever should, in a state of shock that feels impenetrable, yet necessary because they are not yet free. They must still survive. 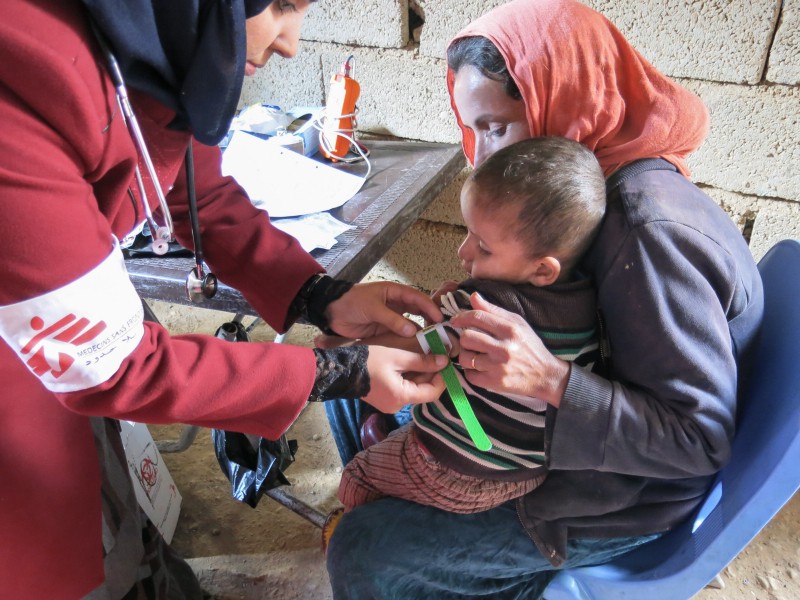 There is an older man who sits alone, short of breath and with a loud wheeze. I am giving him some Ventolin so he can breathe, but instead of breathing better, he starts to cry, and tears keep falling from his eyes. His son is in Hawija. This is all he needs to say.

Sometimes it is the hardest thing to hear these stories and to maintain a sense of professional composure when I feel the tears just behind my eyelids wanting to drop like the rain. I have no idea what to say other than “Inshallah, [God willing] your son will arrive safely.” He looks at me with glassy eyes and repeats “inshallah” and looks up to the sky.

Two little kids lost their mother in another land mine explosion yesterday en route. The air I breathe in is blanketed by suffering, and it is shedding layer after complicated layer all over the land.

There is an eight-year-old boy who confronts me because his little sister is sick. He says he has not slept in days because at night the women sleep and the young boys keep guard. He is serious and strong, his emotions flat. I see children hiding food in their pockets, and the sight of this hurts my mind because they are still surviving.

During this last week, several children have come through with blast injuries and our doctor has removed shrapnel and metal from little limbs before safely transferring them to the emergency hospital in Kirkuk, which MSF is supporting. We see only the ones who make it, the ones who have survived the perilous journey and reached the entry points beyond the front line. We know there are many who have been left behind. 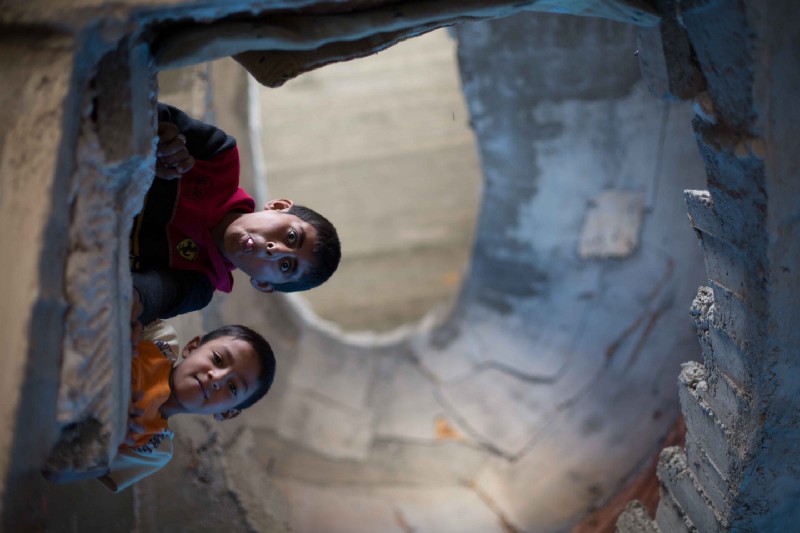 At a different entry point, a young man collapses on arrival as he exits the truck. He is unresponsive and pale, but alive. He is carried to our clinic, and while I grind my knuckles into his sternum to get him to respond, I see tears roll out of the corners of his eyes.

He lies paralyzed on the clinic floor, weeping, until finally he is able to sit up. He tells me how his parents were recently killed and his brother is in Hawija. His wife is pregnant with their first child and he feels overwhelmed by uncertainty.

We sit on the floor and his pregnant wife joins us and they cry together. He thinks I have saved his life and with clasped hands he tells me he will pray for me every night. His courage overwhelms me.

We are building our project from the ground up, and we are preparing for the days to come. We have started training staff in the main emergency hospitals and we are gaining access at entry points to provide a response for war-wounded and emergency arrivals.

Our medical teams are growing quickly to build capacity, and the solidarity of the team makes it easy. The intersection of humanitarianism and medicine here reminds us of MSF’s identity, and the need for our presence is obvious.

The gratitude from our patients is remarkably humbling, and as heavy as the air is in pockets here, we are all exactly where we need to be. 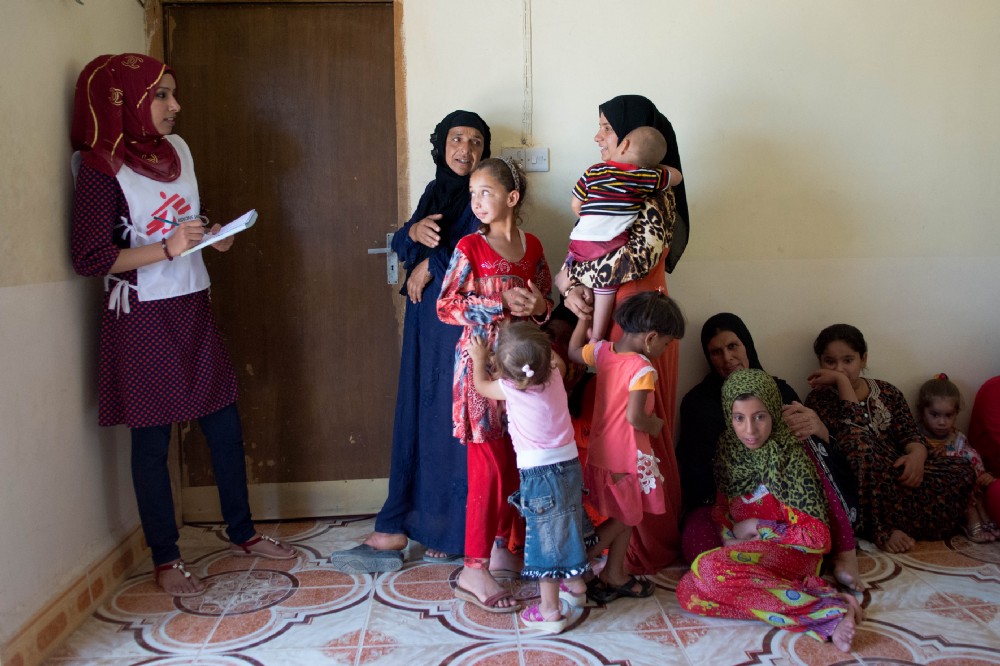