DRC: Attack On a Camp For Displaced People in Katanga 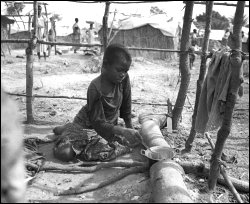 Kinshasa, 2 December 2005 - A camp for displaced people, Mazwombe, in the east of the Democratic Republic of Congo (DRC), was attacked yesterday morning. Some 3,000 people who were living in the camp, seven kilometers from Mitwaba in the province of Katanga, once again were forced to flee for their lives.

"Houses have been burnt, including the MSF health center, one person has been killed and several wounded," reports Laurence Sailly, coordinator of the MSF Emergency Team in DRC. "The displaced fled the camp in the hope of reaching a safe place, adding another chapter to their history of suffering."

The region of Mitwaba is the site of recurring violence and persistent insecurity, forcing local populations to flee their villages and sometimes hide in the forest for months. Since October 2004, more than 15,000 people have settled in makeshift displaced camps in and around the city, in order to escape the fighting between the Congolese Army (FARDC) and the Mai-Mai rebels.

Since mid-November, offensives led by the army have led to renewed displacement of thousands of people across the northern part of Katanga province. Hundreds of families fled when troops of the FARDC moved north of the town of Kilwa, chasing the rebels. So far, over 2,000 newly displaced people have arrived in the towns of Dubie and Mutabie, after having walked for days, negotiating checkpoints, and being subjected to arbitrary questioning by the military. Most of them had already been displaced before.

MSF suspects that many thousands of civilians are in desperate need of assistance. But without access to areas close to the frontline it is impossible to give a reliable estimate of the population in need. Civil and military authorities are obstructing efforts by humanitarian organizations to assess the situation and the needs of the populations to the north of Mitwaba and Dubie.

MSF expresses its deep concern regarding the recent surge of violence and its consequences on civilian populations in the region. "Despite the gravity of the situation, the violent attacks and displacement go unnoticed on national and international levels. There is an acute lack of assistance for these populations, who are equally neglected by the aid community at large," says Brice de le Vingne, coordinator for MSF operations in the Great Lakes region. "MSF is asking for immediate access to the populations in need."

In response to the unfolding situation, MSF has sent additional medical and non-medical supplies as well as staff to the region.