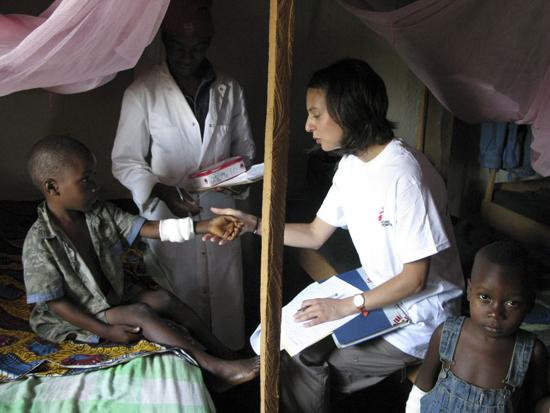 MSF staff visited sleeping sickness patients in Banda in 2008 to give them their injections.

Half a year after Doctors Without Borders/Médecins Sans Frontières (MSF) were forced to abandon its project in the northeastern Democratic Republic of Congo (DRC) due to the security situation, it is still not safe to return. Meanwhile, infection levels of sleeping sickness, which was a main focus of MSF’s activities in the area, are on the rise and many vulnerable people are at risk to the fatal disease.

In Fall of 2008, the Lord’s Resistance Army (LRA) scaled up their level of attacks against the local population in the northeastern province of Haut-Uélé in DRC. Violence soon escalated following a joint military operation that was launched against the LRA by the Ugandan, Congolese and Southern Sudanese armies, with the logistical support of the United Nations mission in DRC. With hundreds of thousands of people fleeing and the level of insecurity constantly rising, MSF was forced to shut all its regular projects in the region.

According to UN sources, the official death toll owing to violence stands at 1,270. It is estimated that 655 children have been abducted and 540,000 people have been displaced from their homes.

MSF fears the number of deaths due to violence exceeds this figure and many more people will have died from contagious diseases. In conflict-ridden and politically insecure areas casualties caused by diseases far outweighs the numbers killed by violence, especially considering how the already scarce health facilities have been degraded. MSF’s projects in Haut-Uélé were a vital element in providing primary health care to people in the region, especially in the more remote and very difficult to access areas. A key component of MSF’s projects the diagnosis and treatment as sleeping sickness.

In Haut-Uélé, MSF found an infection rate for sleeping sickness of 3.5 percent. For the eight months MSF was allowed to operate in the area, 46,601 people were screened and 1,570 patients received treatment. Estimating from the infection rate, a projected 5,000 in the area are victims of sleeping sickness, many in the critical Stage 2. If left untreated, a person in State 2 of the disease will die within six to 12 months.

Regrettably, the conflict has only exacerbated the spread of the disease. When people are displaced, the disease and possibilities for transmission move with them. Southern Sudan and Uganda are also endemic for sleeping sickness. Many areas, which have been ‘clean’ for decades, face being reactivated as when infected people arrive in an area. Already, the violence and incursions by the LRA have also caused instability in the Central African Republic (CAR) and forcing people to flee once again. In the northeast of the CAR, where MSF is currently working, an alarmingly high infection rate of 14 percent has been found.