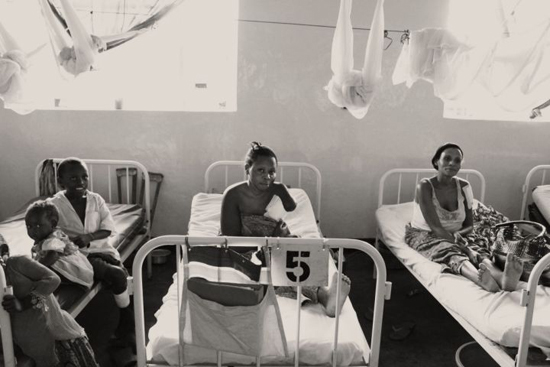 In the North Kivu province of the Democratic Republic of Congo, torture, forced labor, harassment, rape, armed attacks, killings and lootings are weekly, if not daily, realities. In this part of the world, almost no one has escaped the damage caused by a conflict that has festered in this region for the last 16 years. Most people have lost loved ones, have had to flee fighting repeatedly, or have witnessed others getting killed and tortured.

Among the amazingly green and lush hills, resources are abundant and diverse. There is gold, cassiterite, coltan, and rich, fertile soil. Crops grow bountifully when the fields are accessible. But tension is palpable. The number of gunshot victims in the hospital is rising, as is the number of attacks on aid workers on the road. Rumors of killings and rampages abound, spreading from village to village, and proving all too believable.

The population is living in fear. Whole families are suffering, displaced by the conflict into areas that are barely more secure, struggling to find food and clean water , struggling to maintain their dignity, doing all they can to keep on living although their world is falling apart.

As part of its project in Mweso, Doctors Without Borders/Médecins Sans Frontières (MSF) runs a psychosocial program to care for those who are suffering intense psychological distress as a result of the war. Many have severe post-traumatic symptoms that include constant fear, flashbacks, insomnia, suicidal thoughts, despair, anxiety, and breathing difficulties. They come to MSF seeking relief, support, and maybe medication.

For example: A 12-year-old boy has just seen his mother and siblings killed by armed men. His father was severely wounded but somehow the boy managed to flee, despite the gunmen’s attempt to kidnap him, "I am scared,” he says. “I am scared all the time.”

Then there is a 60-year-old woman suffering from crippling headaches and stomach pains and who spends her days wondering, “When will it be my turn to be killed?” Another man has such bad nightmares he nearly falls out of his hospital bed. Another tells of a decade of daily flashbacks and crying spells, stemming from an episode when he was detained and tortured during detention. Many talk about “feeling dead” already.

Most of the people MSF assists have been displaced from their villages and now live in makeshift shelters in camps throughout the province. Shelters are bunched together on soil depleted of vegetation. The materials used to construct the shelters are now old and can barely withstand seasonal changes. Families of four or more share a space less than three square meters in size. Most of the displaced people have been in camps for years. They have no news of the family and loved ones they left behind, but it’s too dangerous to go back to look for them. Even in their so-called sanctuary, however, they still must constantly guard against robbery and harassment.

In Kashuga, a village 15 kilometers [9 miles] from Mweso, five camps house around 15,000 displaced persons. People in the camps are startled easily. At any loud noise, they vanish, running off naked if necessary, thinking they are again in danger. In many ways, they are. They are regularly harassed and robbed. They have no access to their own fields and they occupy the fields of the locals, making food production a serious problem. When it rains, their straw roofs do not keep them dry and they cannot make fires in their huts because of stagnant puddles. Men hide from armed groups, frightened they’ll be grabbed for forced labor. Women have to stand naked in their huts while they wait for their one set of clothes to dry. Children often have to fend for themselves, carrying jugs of water or bundles of wood that are heavier than they are, hoping they are not raped. Girls, of course, are especially vulnerable to sexual attacks. Male children, many of them orphaned by the war or illnesses, join the armed forces because they have no other alternative for survival. It is not surprising that many people living in these dire circumstances suffer from serious mental health problems, problems so debilitating that they are no longer able to care for themselves or their loved ones. Angry outbursts are frequent, and on occasion someone will seek revenge against an innocent bystander.

Numerous people spend the days alone, sitting in front of their shacks; others never leave their beds. For many in the camps, social events such as weddings and celebrations are a thing of the past. Some have even stopped seeking health care for themselves and their loved ones. One woman with severe burns was left alone in her shack by her family. “She will die anyway,” they say.

MSF deals with the poorest and most bereft on a daily basis. Those with the grimmest health problems, the worst living conditions, the least food, and the most traumatic experiences constitute the caseloads of our psychosocial teams.

While offering care themselves, MSF staff also train counselors to provide psychosocial support to their own communities. The goal is to help people in psychological distress regain control over their lives so they can, for example, cultivate crops, care for their children, trade goods and participate in community activities. Reducing the severity of their symptoms so they are able to function again is essential for their health, their nutritional status, their living conditions, their sense of belonging to a community, and their capacity to live life despite the difficulties they face every single day.

Through individual or group counseling sessions, the counselors work to address psychosomatic symptoms, practical problems, family disputes, grief, loss, and overwhelming emotions such as sadness or anger. Helping clients understand that their symptoms are normal considering what they have lived through is often the first step towards managing or resolving their problem. Often, counselors read body language and observe facial expressions to see the impact of the horrendous experiences their clients have endured.

Mental health care helps the most traumatized and desperate patients accept their challenges and stave off despair, or even suicide. It helps those who want to seek revenge find other ways of dealing with their anger. Psychosocial care also restores dignity by helping patients grapple with their traumatic experiences in order to heal and to avoid chronic health problems. Some clients walk over 15 kilometers [9 miles] to attend sessions.

The majority of people who seek help do get better. They start smiling again, they feel momentarily free of anxiety, they start working again. The counselors hear reports of changes, that, for instance, levels of violence have decreased in some camps where mental health care is offered. Counselors find fewer clients during the day because they are off working again. Doctors report improvements in patients' compliance to medical treatment and in levels of cooperation.

Sometimes, astounding changes can occur in just a few consultations. A 15-year-old teen, for instance, had been a victim of kidnapping and sexual slavery. She was suicidal, crying constantly, unable to speak or make eye contact. In her first sessions, the cried and cried while telling her story, but in subsequent sessions, her crying ceased, even as she recounted the same brutal episodes and details. Her smile returned as well, and she felt up to working the fields again. The world around her had not changed but she is committed to moving forward.


Joelle Depeyrot is a mental health officer who recently spent 11 months in DRC with MSF and had previously spent 13 months in the Central Africa Republic with MSF.