DRC: Despite Breakthrough Treatment, Sleeping Sickness Flourishes Due to Violence 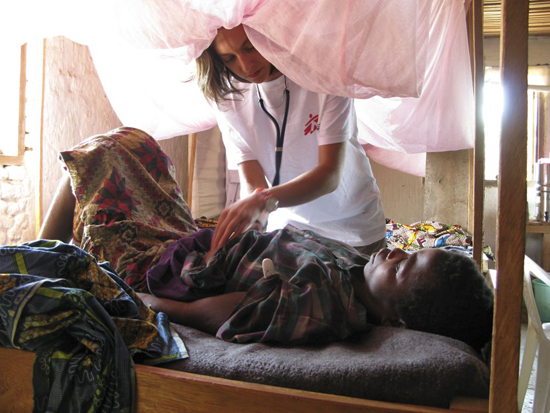 In 2007, MSF opened a sleeping sickness project in the northeastern province of Haut-Uélé in the Democratic Republic of Congo. Due to insecurity, the project was suspended in March 2009. 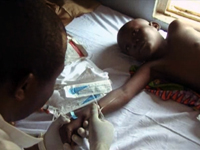 RELATED NEWS VOICE FROM THE FIELD

A new treatment has potential to make a difference in the fight against sleeping sickness. But continued violence in Democratic Republic of Congo (DRC)  means people have difficulty accessing health care, and displaced people who are infected could spread the disease to other areas.

Sleeping sickness, a fatal parasitic disease, has ravaged Africa for decades and causes thousands of deaths each year.

Sustained political instability and violence have a massive impact on the health of affected populations. Studies show that more people die of treatable diseases during conflict than they do of conflict-related casualties, mainly due to the breakdown of already poor healthcare facilities.

Human African trypanosomiasis—more commonly known as sleeping sickness—is a particularly problematic disease which tends to surge during conflict. Unlike malaria or diarrhea, it demands difficult diagnostics and treatment, and is 100 percent fatal if left untreated.

Recently, a potential breakthrough has been made in the fight sleeping sickness. The World Health Organization has recently accepted a new combination drug therapy, NECT, as treatment for people suffering from the advanced stage of the disease. The effectiveness of this combination of nifurtimox and eflornithine has now been proven; it also does not have the intense side effects of previous, arsenic-based treatments. NECT costs less and is easier to transport—two significant benefits given that populations affected by the disease live in African countries that lack human resources and healthcare infrastructure.

Sleeping sickness is transmitted by the tsetse fly, which harbors the t. gambiense parasite. Tsetse flies are found in 36 countries in sub-Saharan Africa. According to the World Health Organization, sleeping sickness affects 50,000 to 70,000 people each year.

Nearly eliminated in the 1960s, it has made a comeback due to war, population movements, and the collapse of health systems over the past two decades.

Sleeping sickness has ravaged Africa over the last century with severe epidemics in Kenya, Tanzania, Uganda, Nigeria and DRC. By the 1960s, the disease was brought under control, but complacency and neglect led to its re-emergence in the mid-1970s and outbreaks continued until early this century. Despite recent data, which hint that sleeping sickness is on the decline, certain disease hot spots remain. These are all areas of high insecurity or conflict.

One hot spot is in Haut-Uélé in DRC where Doctors Without Borders/Médecins Sans Frontières (MSF) had projects to detect and treat sleeping sickness from June 2007 until March 2009. During this period they found areas of high infection—approximately 3.4 percent of the 46,601 people screened were positive and treated, with some small pockets as high as ten percent. For this particular disease, these rates are serious.

Haut-Uélé borders Uganda and Southern Sudan. Access to health care is  extremely difficult and the area has been subject to sporadic conflict and political tension for many years. Since September 2008, this insecurity and violence, which has been exacerbated by the joint military operations against the Lord’s Resistance Army (LRA), has caused almost all MSF activities to be shut down. This is particularly concerning since it is feared that over 5,000 people in the region will die within the next two years if they cannot access treatment for sleeping sickness.

Even more concerning is that the affected population is on the move. Refugees are entering new regions, raising the risk of reactivating sleeping sickness in places where it has been eradicated. Moreover, the conflict is pushing the LRA to expand its territory into areas of the Central African Republic (CAR), which already has worrying rates of the disease.

The arrival of NECT brings hope to thousands in highly volatile areas like northern DRC, where treatment campaigns are currently not possible until security improves. Since MSF suspended its sleeping sickness project in Haut-Uélé, local public health services in the region have not been able to take over MSF’s work.

As NECT is an affordable new therapy that is easier to transport than existing medications, it is the hope of MSF that this treatment will soon become accessible to the thousands of people who have received a ‘double sentence’—being infected with a deadly disease and having to live with the threat of pervasive violence.