A rebel advance on Goma is causing panic and displacement in the Democratic Republic of Congo. MSF camps are prepared for an influx of refugees. 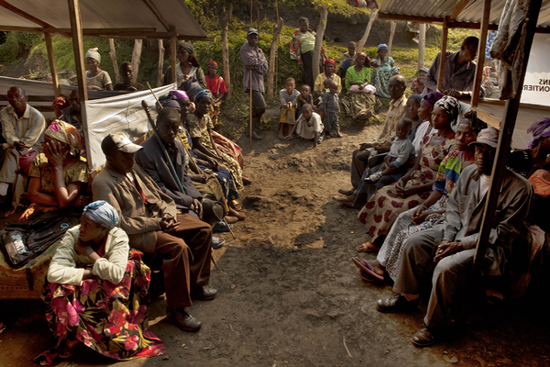 Refugees in Minova, where many people settled after fleeing violence near Kanyaruchinya camp.

GOMA, DEMOCRATIC REPUBLIC OF CONGO/AMSTERDAM, November 20, 2012—In the face of a rebel advance on Goma, the capital of North Kivu Province in the Democratic Republic of Congo, tens of thousands of people have emptied villages and displaced persons camps near the city and are desperate for assistance, the international medical humanitarian organization Doctors Without Borders/Médecins Sans Frontières (MSF) said today.

The Kanyaruchinya camp, where MSF once provided medical services, is now empty after approximately 60,000 people—many of whom were previously displaced—fled in panic. Many have reached the Mugunga III, Mugunga I, and Lac Vert camps, or have headed south to camps in Minova and Kirotche in neighboring South Kivu. Conditions in many camps are precarious and food is lacking.

MSF is providing health services and has set up water and sanitation facilities in Lac Vert and Mugunga I camps, and medical teams report thousands of new arrivals since Sunday, with people desperate for assistance.

MSF teams are prepared to respond to additional medical and humanitarian needs. Extra medical staff, including surgeons and medical supplies, are en route in the event of further fighting and displacements. MSF’s cholera treatment center in Goma is preparing for an influx of new cases as tens of thousands of people arrive and set up camp in and around the city.

MSF continues to provide free health care in numerous hospitals, health centers, and health posts elsewhere in North and South Kivu, including in Rutshuru, Kayna, Masisi, Mweso, Kitchanga, Walikale, and Pinga. There are also a number of MSF cholera treatment centers, mobile clinics, and emergency response activities in the region.