DRC: "I Fear I Will Never See My Sister Again" 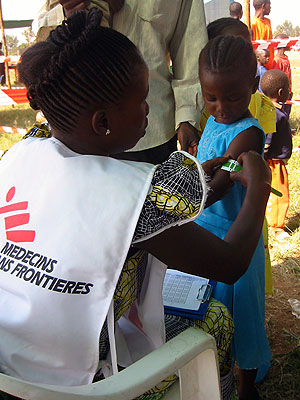 Mireille S. has worked as a nurse with Doctors Without Borders/Médecins Sans Frontières (MSF) in Ariwara, an area of Ituri Province in the northeast of Democratic Republic of the Congo (DRC), since MSF began its emergency project there in February 2009.

She had just arrived in Ariwara from Aba, a town approximately 150 km (93 miles) to the north, next to Garamba National Park, which she had been forced to flee because of the nearby presence the Lord’s Resistance Army (LRA). The LRA was making life hell for the inhabitants near the rebel group’s base camp in the park and would randomly pillage local villages of all their supplies, and take away their children.

In January, I left the first time after the LRA attacks in our region. I waited three weeks to go back, but life there was unsustainable. We didn’t feel safe at all. It was impossible to go to the fields because of fear of attack on the road. Every night, women and children would hide while the men tried to guard them, prepared for the worst.

The attacks suddenly started up again, so my family decided to leave, once again. We all fled in opposite directions. My parents headed toward South Sudan, and I’ve just heard some terrible news: they are not allowed to return. Authorities put bracelets on them that say they’re forbidden from traveling with their belongings. Since they have no means of supporting themselves, I’m sending them small sums of money to help them survive. My brother brings it up to them every month. The journey takes him a week by bicycle.

On top of this, my other brother called to tell me that my little 13-year-old sister, Micheline, as well as my sister-in-law who is 17, disappeared after an LRA attack two weeks ago. My brother was working out in the field and could do nothing. For the first couple of days everyone hoped the girls were just hiding in the bush and that they would reappear. But no, neither one has shown any sign of life. Now I fear I will never see my sister again. It makes me sick to think of what’s happened to her. I know the rebels prefer children. And she’s so young. God only knows where she is.

Why do they do this? We never did anything to them! It’s as if they are out to get us, but why? If I had known that I would be born Congolese, I would have chosen not to come into this world. Just to experience all this suffering? I have been fleeing war ever since my teens. I pursued my studies with the notion that I could lead a normal, content life with my family. But what sort life will my children ever know?