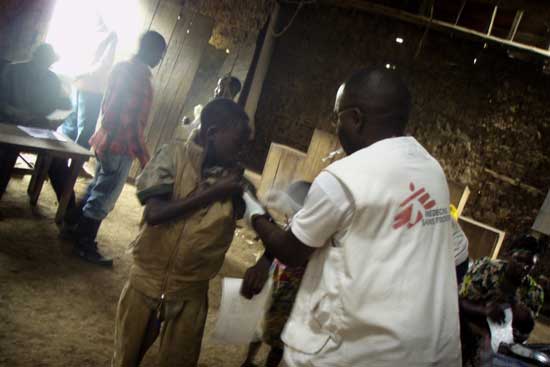 An epidemic of measles is currently raging in the Miandgja, Ngomashi, and Lwibo districts in the Masisi region of eastern Democratic Republic of Congo. There are hundreds of thousands of children living in these areas who have not been immunized against measles. Doctors Without Borders/Médecins Sans Frontières (MSF) has therefore launched a large-scale emergency vaccination campaign and has also treated 130 children who have contracted measles.

More than 1,036 cases of children with measles have been recorded in the region since the start of the year, and there have been 85 deaths. However, this number may increase, as complications of the disease can lead to death some weeks after infection.

Vaccinating those at risk

Outbreaks of measles can be particularly deadly in countries at war. In certain parts of Masisi, the health services cannot offer systematic vaccination due to security risks. Further, the concentration of a large number of families who have fled for refuge and who are now living in crowded conditions in camps increases the risk of infection considerably.

MSF is therefore supporting the health system by ensuring that patients infected with measles can be isolated and receive their medicines early enough. Medical teams are focusing on the most severe cases: those who have developed complications such as respiratory infections, diarrhea, dehydration, or malnutrition.

Meanwhile, teams are vaccinating all children between the ages of 6 months and 15 years at 32 health posts. This is a large-scale campaign: more than 165,000 children were vaccinated between October 14 and 29. However, this number could have been even higher. On October 17, seven vaccination sites in the Ngomashi and Kimua areas were used as bait in an offensive pitting the governmental forces against the Forces Démocratiques de Libération du Rwanda (FDLR). Due to this violent and unacceptable attack, both the patients and the vaccination teams were forced to flee the area. Since then, activities have ground to a halt in this particularly volatile area.

Getting into difficult-to-access areas

Many people living in areas that are difficult to reach still have little or no access to primary health care.

“The measles epidemic is rife, pretty much everywhere,” says Joseph Kishimba, the head of one of MSF’s vaccination teams, “and some of the villages are hard to access by car. Masisi is a mountainous area.”

“We have to adapt—be inventive,” says John Kiumbe, an MSF logistician.
“We need to use motorbikes, or carry everything we need to the villages by foot. We’re in the middle of the rainy season, which makes this vaccination campaign even harder to run.”

“Measles is a highly contagious disease, and it kills a number of children here every year,” says Fabrizio Ferri, head of MSF’s medical emergency activities in Masisi. “The most severe forms of measles appear in young, malnourished children. The children don’t die directly from measles itself, but from its complications, such as encephalitis, severe diarrhea or pneumonia. This is why we’re administering vitamin A supplements alongside the measles vaccine, and we’re monitoring the nutritional status of patients during this campaign."

There is currently no specific treatment for measles, a viral infection, and vaccination is the best preventive treatment that exists.