When a number of measles epidemics hit DRC at the same time, MSF began mass treatment and immunization programs in several parts of the country. 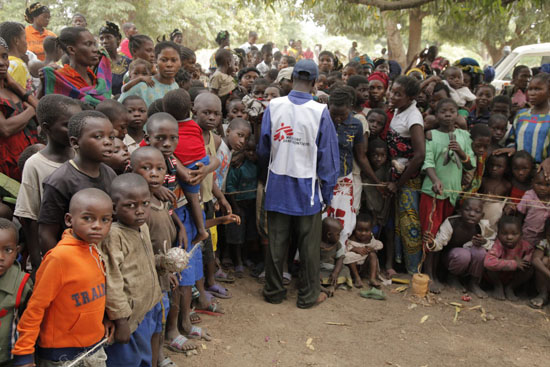 After health authorities in the Democratic Republic of Congo (DRC) officially declared that a number of measles epidemics had hit the country, Doctors Without Borders/Médecins Sans Frontières (MSF) began carrying out mass immunization campaigns to increase measles vaccination coverage in the affected areas. In addition to vaccinations, medical teams have treated hundreds of measles cases.

Measles is a highly-contagious viral infection that can spread quickly with deadly consequences for vulnerable populations. DRC is one of the countries where the disease persists despite successful efforts to control it elsewhere in the world.

“Epidemics like these are avoidable if the population has been vaccinated,” said Karla Bil, MSF’s Health Advisor. “Mass immunization campaigns are so important because they raise the level of vaccination coverage and prevent unnecessary deaths."

In the health zone of Fizi, in South Kivu province, MSF aims to vaccinate 120,000 children between the ages of 6 months and 15 years. Over the next six weeks, medical teams will keep trying to reach remote locations despite ongoing and expanding military operations in the area and the looming rainy season. The plan is to immunize nearly every child in the health zone. Preparations started when a measles epidemic was confirmed at the end of September. Since then, in addition to the vaccinations, MSF has also treated approximately 300 people in the area who were suffering from measles and complications.

Simultaneously, MSF has been responding to a measles epidemic around Dilolo, in Kitanga Province, near the Angolan border. Since September, 368 measles cases have been confirmed. Last week, MSF started a campaign to vaccinate 72,000 children in and around Dilolo. Teams are hoping to vaccinate 90 percent of the children in the area. MSF will also carry out an epidemiological assessment in the neighboring health zone of Kasaji, where measles cases have been reported.

In Bendera, MSF teams are vaccinating 12,000 children, half of whom were displaced from their homes in South Kivu last year. MSF teams have also treated several cases of measles in the region.

The village of Lubilo was at the epicenter of the measles outbreak. Located in South Kivu, on the eastern side of a peninsula that extends into Lake Tanganyika, the village has a population of approximately 3,500 people and is extremely isolated, reachable only by boat.

After the local health authority reported that 12 cases of measles had resulted in the deaths of two children, an MSF team left for the village the next day. After a five-hour boat trip, they were greeted by concerned villagers. The first priority was setting up an isolation tent where suspected cases could receive treatment and the spread of the disease could be contained. Measles is an extremely contagious disease; almost all non-immune children contract the infection if exposed to the virus.

The next task was informing villagers via megaphone to bring any sick children immediately to the heath post for free medical care. Soon, the wooden benches were filled by mothers with sick children waiting for a consultation. A child had died the night before and people were desperate to get their children seen. Many were severely dehydrated, malnourished, and suffering from complications such as pneumonia or diarrhea. Fifty cases were confirmed that day alone, and five seriously ill children were immediately given IV drips. One of them died during the night. The other four were transferred by boat to the MSF-supported hospital in Baraka the next day.

MSF has treated around 300 children who have been affected by the measles epidemic in and around Lubilo. Eight-year-old Julienne was one of them. Her mother brought her to the MSF health post when a rash appeared on her face and then spread rapidly to her arms and legs. She had a high fever and had been coughing for several days. Her eyes were badly irritated and she had difficulties breathing. She was very lethargic and had been unable to eat.

Concerned by her fragile state, the team transferred Julienne by boat to an MSF supported hospital in Baraka for treatment. She responded well to treatment and is now fully recovered and back with her mother at home.

MSF had vaccinated more than half a million children against measles in 2009, but dealing with the current outbreaks was a different undertaking given the present and urgent need to vaccinate so many children so quickly. MSF employed more than a hundred extra staff in South Kivu to visit villages in the region and inform them about the free vaccination program. There were also radio announcements in several local languages.

“I was working in the fields when I heard the news about the measles vaccination program from some other mothers,” said Bisoci Mulasi, a 31-year-old mother from Kilungu in South Kivu. “Then I decided to go there with my children.” She eventually travelled more than 30 kilometers (18 miles) with her five children to get them vaccinated.

It was no easy task to get enough of the vaccine into the country in the first place. “It’s been a huge logistical challenge sourcing 150,000 doses of measles vaccine at fairly short notice, certainly considering the heightened demand in the region,” said Grace Tang, MSF’s Head of Mission in South Kivu.

And once the vaccine was in the country, MSF had to ensure that it was kept cold during transportation so that it reached the populations in optimal condition. The measles vaccine contains live microorganisms and to be effective must be kept at a controlled temperature between 2 and 8 °C. “We’ve had to use cooling elements, solar powered fridges, and locate fridges along the route,” said Tang. “But it’s been so worthwhile seeing children in the area getting a lifetime’s protection from this disease.”