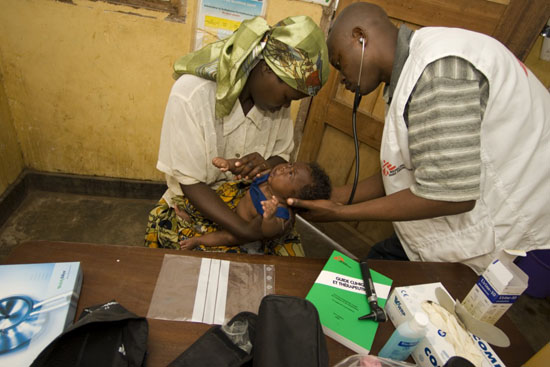 An MSF medical worker provides a consultation to a displaced mother and child in North Kivu province.

In the areas of Nyanzale and Rutshuru in North Kivu province, eastern Democratic Republic of Congo (DRC), MSF teams are faced with recurring medical emergencies, including malnutrition, urgent surgical needs, and epidemics. Despite a ceasefire agreement signed in January by the government and armed groups, insecurity persists in this region, where the population is subject to violent attacks and must flee, often multiple times. Romain Gitenet, MSF head of mission in DRC, provides an update on MSF’s work there.

The security situation has not normalized

"The ceasefire agreement has not been fully implemented because armed groups remain active in the province. Some rebel groups continue to fight for their political demands or to maintain control over income-producing territories. Armed groups attack the population, stealing their resources and food.

Nothing has improved for people, who continue to flee the violence. The displaced persons often stay close to the area where they live because they continue to hope to return home. They might be two hours’ walk from home, but are attacked on the roads and in the fields. Rape victims are often attacked while working in or returning from the fields."

"Since we began work in this region, we have strengthened our teams in Rutshuru and Nyanzale so that we could provide more extensive medical assistance across wider geographic areas.

The Rutshuru hospital had 115 beds when we arrived in 2005. Today, there are more than 200. We still cover the pediatrics, internal medicine, surgery, and emergency departments, and we’ve also set up a blood bank. In 2007, we began working in maternity. We share responsibility for this department with the health authorities, and we handle caesarian sections and post-operative care on our own. Given the high number of women who are undergoing caesarian sections, we had to set up a second operating room.

Surgery represents a major activity. In 2005, we performed two operations per day, while the 2008 average is 12 per day. We do not have time to perform elective surgeries; nearly all are emergencies.

With respect to our work outside the city, we travel out from Rutshuru based on where the displaced populations are located. We travel as close as we can to the landlocked areas, so we can reach those living in insecurity. Mobile teams see patients at health centers located south and north of Rutshuru. This flexible and adjustable program allows us to respond to the movements of populations fleeing fighting, and to seasonal peaks in malaria, as well as to epidemics.

We have stabilized and expanded our program in Nyanzale by assigning more MSF staff there. We treat malnutrition at a therapeutic feeding center. We also provide consultations to children under five years old and treat malaria, which is still found even though the site is located at a high altitude.

The team covers a large area, reaching as far as Katsiru and Bambu. When patients require surgery, we refer them to a hospital supported by MSF."

A focus on sexual violence

"The other major focus of our work is treating victims of sexual violence. In January 2008, we treated 300 rape victims.

For these patients, we provide consultations at our two health centers in Nyanzale and Rutshuru. We are also present in neighboring areas thanks to a system of ambulances. MSF pays for the rape victims’ transportation so that they can be treated right away. They must be treated within 72 hours after the attack if prophylactic treatment for HIV/AIDS is to be effective. The population is well-informed. A network of women distributes information and the message is broadcast on the radio, emphasizing the need to obtain medical treatment within 72 hours. "

"We treat malaria on a cyclical basis—two or three times a year, based on the epidemic’s peaks. In the pediatric department at the Rutshuru hospital, we treat many children suffering from malaria and severe anemia. However, we also work upstream, providing direct support to health centers in the areas most exposed to malaria. That way, they can treat the population at no charge and patients do not arrive at the hospital in a severe condition.

In late 2007, we faced a cholera epidemic of unusual proportions and we recorded more than 2,000 cases in one-and-a-half months. The explanation lies in the precarious living conditions of the displaced population. The villages where they are concentrated are growing and becoming cities, but lack the necessary infrastructure. In response, MSF set up a cholera treatment center in the Rutshuru hospital and treatment units on the city outskirts. Other organizations worked on improving access to water because vibrio cholerae is transmitted through water. The number of cases has fallen sharply since January, but is picking up, with four to 20 cases a day, so we are resuming our awareness efforts.

In addition, measles cases have been detected since early January. Continual population displacement increases the risk of the spread of this contagious illness, which can be fatal, especially for children. We plan to hold a vaccination campaign in the Nyanzale and Rutshuru areas, where measles cases have also been reported."

In addition to Rutshuru and Nyanzale, in North Kivu, MSF is working in the Goma, Lubero, Masisi, and Walikale districts. In the Goma area, MSF opened cholera treatment centers close to IDP camps and supports cholera treatment at other facilities; and in Masisi district, MSF is performing emergency surgeries, treating malnutrition, and providing consultations for malaria and respiratory and urinary infections.