Fighting between the Congolese army and the rebel group M23 in North Kivu Province threatens thousands of civilians. 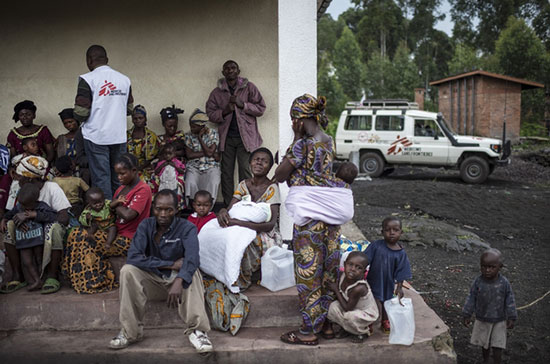 The fighting broke out in areas west of Goma, the capital of North Kivu Province, between the Congolese army (FARDC) and the rebel group M23, with civilians in towns and displacement camps caught in the middle of heavy weapons fire. The Mugunga, Lac Vert, and Buhimba camps, located on the road between Goma and the town of Sake, have been caught in the middle of the shelling for the past two days. All parties should refrain from using force around displacement camps and other civilian areas, MSF said.

"The road between Goma and Sake is strategically located, but fighting in such close proximity to people's homes is endangering the lives of thousands of vulnerable people," said Thierry Goffeau, MSF head of mission in North Kivu.

The fighting and positioning of combatants so close to the camps has forced MSF to suspend its activities in Mugunga and Bulengo. An MSF team is assessing population movements and is ready to intervene if necessary. Since the shooting began, residents of Mugunga III camp fled to other nearby camps or farther into the city of Goma in search of safety.

“A quarter of the camp has emptied. People are continuing to leave, afraid they'll end up trapped. Those who remain are distraught, not knowing where to go or how to react. People are panicking," Goffeau said.

Six shells landed in the area of Mugunga on May 21, injuring at least four people. An MSF team was able to transfer them to a nearby hospital supported by the International Committee of the Red Cross (ICRC). Towns in the area were affected by heavy artillery, which injured several people. The district of Ndosho, near Goma, took the brunt of shelling, with at least three people killed and more than a dozen wounded.

Last November, M23 launched a first attack on Goma and Sake, forcing many people to flee and seek refuge in camps west of Goma. Goma fell after 10 days, leading to negotiations with the Congolese government.

Renewed fighting between the FARDC and M23 comes ahead of UN Secretary-General Ban Ki-moon's visit to the country and the establishment of a special UN intervention brigade, which for the first time has a mandate to carry out targeted offensive operations against rebel groups in eastern DRC.