"When we arrived, five armed men took us by surprise. They were accompanied by three hostages, including a woman who was translating what they were saying. They tied our hands and took us into the bush." 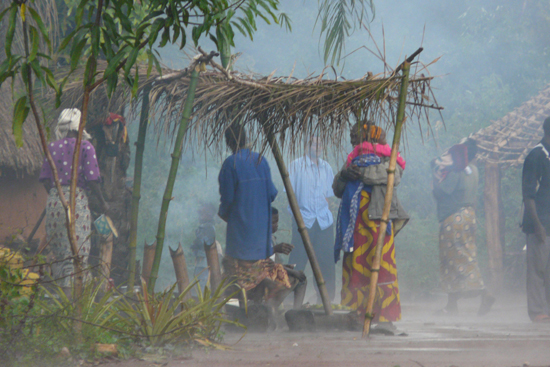 In a village near Dungu in Haut-Uélé, the people live in constant fear of violence.

Since September 2008, inhabitants of the Haut Uélé district in northeastern Democratic Republic of the Congo (DRC) have been living in constant fear and are facing a critical humanitarian situation. They are trapped in a region wracked by waves of violence. The conflict between armed forces and the Ugandan rebel group the Lord’s Resistance Army (LRA) is estimated to have displaced around 250,000 people.

“...They took my little girl to the village... They came back without her. They only brought back the rope they had tied her with.”

Thousands of people are living in the bush with little food and health care, and in most instances aid organizations are unable to reach them. Even where displaced people have congregated in more secure areas, the aid response so far has been insufficient. The health system has been disrupted and most medical activities have had to be suspended because of insecurity.

Several Doctors Without Borders/Médecins Sans Frontières (MSF) teams are operating in the region, providing emergency assistance and free medical services, including a project in the town of Dungu. Activities there include surgery, nutritional care, mental health care, support to victims of sexual violence and primary health care in two health centers. Half of Dungu’s population of 45,000 are people who have been displaced by the violence.

Last Monday, the MSF team in Dungu airlifted three survivors of a horrific attack that had occurred five days before in a small village near Bangadi, which lies 62 miles northwest of Dungu. The number of villagers who died in the attack is still not known.

MSF Field Coordinator Claire Debard organized the medical evacuation. After being airlifted, the survivors, two men and a women around 60 years old, were taken to the general hospital in Dungu where a medical team was waiting for them. They presented with very severe wounds, including leg fractures, which needed surgical interventions.

After their medical treatment, Debard was able to speak to the two men and hear their story of survival.  Following is the story, as told by one of the men:

“They hit our legs and knees and then they ran away into the bush, leaving us there. We spent the night lying on the ground.”

“I live in a village some two miles from Bangadi with my wife, our five-year-old daughter, and my older brother. The head of our village told us to leave at the beginning of August and move to Bangadi because armed groups were nearby and he couldn’t ensure our safety.

“Unfortunately, after a few days in Bangadi, we didn’t have any food left and the situation was getting difficult. That’s why on Wednesday, August 12, we decided to go back to our village to get some food. When we arrived, five armed men took us by surprise. They were accompanied by three hostages, including a woman who was translating what they were saying. They tied our hands and took us into the bush. The next day, they took my little girl to the village as they wanted to retrieve a chicken and peanuts. They came back without her. They only brought back the rope they had tied her with. She was dead.

“They told us they wouldn’t kill us but that we needed to return to the village with them. Once we arrived, they would take our food and beat us. And this is what they did: they hit our legs and knees and then they ran away into the bush, leaving us there. We spent the night lying on the ground.

“On Monday morning, I decided I had to do something and I crawled toward the next village, Yamba, a mile away. I managed to get there. The villagers went to get help in Bangadi. My wife and I were taken there by bicycle. It was very painful. My brother had to be transported on a stretcher because he couldn’t stay on the bike.”