DRC: "There is indescribable fear in everyone's eyes" 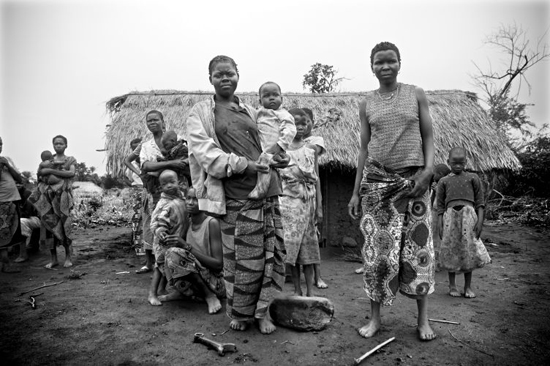 A group of women and children stand in front of a shelter at a camp near Faradje in the northeastern Haut-Uélé province.

Katharine Derderian has just returned from the Haut-Uélé district in northeastern Democratic Republic of Congo (DRC), where she coordinated activities for Doctors Without Borders/Médecins Sans Frontières (MSF). In this interview, she talks about the people who live there and the climate of fear which reigns in this region where Ugandan rebels from the Lord's Resistance Army (LRA) are in conflict with DRC's armed forces.

What is the situation like in this part of DRC?

Since September 2008, LRA rebels from neighboring Uganda have committed acts of extreme violence against people in Haut-Uélé and Bas-Uélé provinces in northeastern DRC. In March, the situation deteriorated further when countries in the region launched a joint military offensive against the LRA. Today, several regions in northern DRC, Southern Sudan, and Central African Republic are affected by violence. Violence against civilians continues, and access for humanitarian organizations is limited due to the high level of insecurity. What is happening today in northeastern DRC and Southern Sudan is a serious and neglected crisis.

Can you tell us about your mission and MSF's projects?

“What they find when they return often prevents them from staying: their houses have been burnt, their belongings looted, and insecurity is rife.”

I was in charge of the MSF project in the towns of Niangara and Faradje in Haut-Uélé. In Niangara, MSF supports a referral hospital with around 50 beds, where we offer medical and psychological care for victims of sexual assault. On the other bank of the river Uélé, which cuts through the town, we work in a health center. In total, the Niangara team carries out 800 medical consultations per week. In Faradje, we support a 40-bed health center, where the team carries out 500 weekly consultations and offers psychosocial help to those people who have lived through traumatic events. Other MSF teams work in Dungu, Dingila, and Doruma. In total, 130 Congolese and 21 international employees work in MSF projects in Haut-Uélé and Bas-Uélé provinces.

What happens to people who have been displaced by violence?

According to official estimates, 250,000 people have fled the violence in northern DRC and tens of thousands have crossed the border seeking refuge in Southern Sudan. In Faradje, 4,000 displaced people live in three camps and in Niangara, there are around 10,000 displaced people who are looked after by the local population. Living standards for the people who come to these areas are poor, but I saw a huge amount of solidarity between the residents and the newly displaced. The problem is that living conditions are getting worse for everyone—not just the displaced, but the original population too.

Because there is such a small humanitarian presence, the local people are doing what they can, giving displaced people housing, food, and clothes, sometimes to people who speak an entirely different language. One woman I met told me that people had fled their villages in the night or early in the morning in such fear that they hadn’t even dressed; they had simply run for their lives. Displaced people in the towns where we work would point to the clothes they had on and tell us that they had been given them when they arrived here. And because everything is shared, both the displaced people and the local population find themselves in an ever more fragile situation, with less food and fewer means to cope. Everyone shares everything, including abject poverty.

Can the displaced people return home?

“The fear is so persistent…It is fear of violence from all sides; fear of attacks late at night and in the early morning that leaves you sleepless; fear of losing your children to kidnapping; fear of having to leave behind your home and your land”

Some have tried to return home, but this is a very small minority. What they find when they return often prevents them from staying: their houses have been burnt, their belongings looted, and insecurity is rife. Most of the displaced people are scared and stay in towns or camps, since they feel safer in numbers. When there isn’t enough food, some people try to return to their fields in order to survive. But it is clear that the previous harvest, which was ready in March and April, has been lost. Most of the displaced people were unable to sow seeds for the next harvest, which is due now, because of insecurity and fear.

Do you sense this fear when you interact with people?

The attacks have been ongoing since September 2008, including an attack in Faradje on Christmas day. You see an indescribable fear in everyone's eyes. The fear is so persistent because almost everyone has been affected by violence of some kind—murder, rape, kidnapping—afflicted on either themselves or people they know. It is fear of violence from all sides; fear of attacks late at night and in the early morning that leaves you sleepless; fear of losing your children to kidnapping; fear of having to leave behind your home and your land in a culture where people tell you first of all that they are farmers, and that everything used to be fine as long as they had fields for food.

During consultations, the MSF team treats malaria, respiratory infections, and sexually transmitted infections, but also cases of gastritis or non-specific pain. These latter diagnoses are indicators of stress.

What is MSF's response to these problems?

In addition to medical care, we have a psychosocial support program. In this region, nearly everyone you meet has lived through traumatic events. Over the past few weeks, in the Faradje health center, we started to see a growing number of children who had been kidnapped by LRA rebels to act as carriers, fighters, or sex slaves. We have provided care for 108 children, both boys and girls, aged from roughly nine to 18. We give them a place to sleep, space to play, and individual support from an MSF psychologist. I was pleasantly surprised to see how much they improve.

Are aid organizations in a position to meet people’s needs?

The presence of organizations like MSF brings not only medical and humanitarian aid, but also a degree of normality. I will tell you an anecdote: when we arrived in Niangara for the first time, the hospital was operating as best it could, but it was in a pitiful condition and surrounded by very long grass. While kick-starting the medical activities, the MSF team also started cutting the grass. Over the next few days, and still today, we noticed that all over town, people were cutting the grass. I found that very symbolic.