DRC: "These People are Completely Dispossessed"

MSF Head of Mission Thierry Goffeau describes the situation in North Kivu, where recent violence has displaced thousands of people. 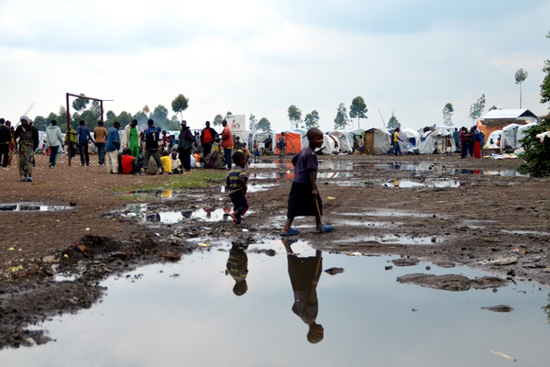 Refugees in Kanyaruchinya, where thousands of people displaced by violence have settled.

Thierry Goffeau is Doctors Without Borders/Médecins Sans Frontières (MSF) Head of Mission in North Kivu Province, Democratic Republic of Congo. He is currently in Rutshuru, where panic and fear in the wake of an advance by M23 rebels on Goma, the provincial capital, is beginning to subside.

What’s the situation where you are?

At the moment I’m in Rutshuru, the M23 stronghold, the eye of the cyclone. The situation right now is rather quiet. In Goma, things have been calming down slowly since the fighting ended and the gunfire has stopped. Yesterday there were about 100 wounded, both civilians and military actors; their wounds mostly from gunfire and shrapnel. The exact number of dead is still unknown but there are bodies in the streets.

People remain fearful and the shops are still all closed, and there’s no electricity or water anymore. There’s also a clear need for surgical support. A lot of people who were displaced in July during the fall of Rutshuru to the M23, and who settled on the edge of the city in Kanyaruchinya, have gone to Goma or westward to Sake. They say that more than 55,000 people are on the move.

What are you seeing in the streets, the camps, the hospitals?

Kanyaruchinya camp is empty. Since the fighting stopped, some people have come back up from the city to Rutshuru, their home turf. It’s worth noting that these people are completely dispossessed—before this new wave of violence, the camp wasn’t being maintained properly, so people were already in a state of utter destitution.

I imagine that very soon the shops will open up again and that the city will come back to life. But we are talking about a serious shock here, and trust and the general atmosphere will take a while to stabilize, all the more so as people are now talking about a counter-attack.

What’s MSF doing to respond to this emergency?

We’re putting a surgical support team in place in Goma, and we’re also working with the displaced people. Today, we’re able to work more or less as normal, but our teams are of course stressed out and worried. This is literally a regime change—how’s the city going to function tomorrow? The International Committee of the Red Cross has also got a surgical team here, but a lot of organizations have evacuated so it’s a matter of waiting for them to return.

Of course, we’re not waiting—we’re working! The health facilities are still working, so MSF isn’t there to take care of all needs but rather to provide support. As concerns the displaced, the situation should be monitored closely, as we’re seeing some come back to Rutshuru rather than resettling in Kanyaruchinya. Something to keep an eye on.

What are the most significant challenges for you as MSF?

The most difficult thing is getting expatriate staff to Goma as the context is changing quickly. The logistical constraints to reaching certain areas can also complicate our efforts to size up needs or set up activities. For example we wanted to get to certain displaced camps by going round the lake by way of Bukavu, but that’s not possible for the moment. The most important thing for us is still the security of MSF staff and of the patients.