While visiting an uncle in Goma, nine-year-old Eden became a casualty of the ongoing and worsening conflict in eastern DRC. 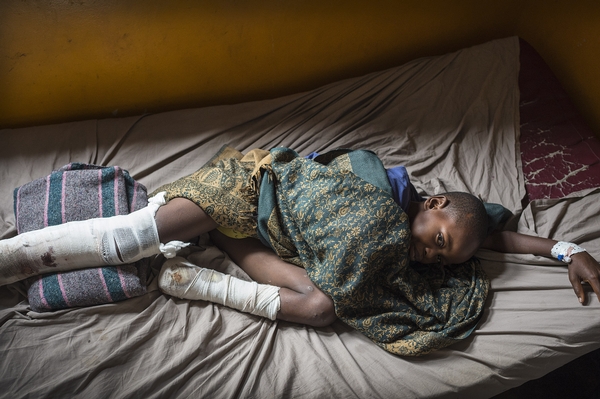 Nine-year-old Eden recuperating with the help of MSF staff in Goma.

Eden, a nine-year-old boy, was seriously injured in the recent fighting in Goma, the largest city in the eastern Democratic Republic of Congo, between the nation’s armed forces and the M23 rebel group. He is one of 60 wounded patients currently being treated by MSF teams and local health staff in Virunga hospital.

As he was carried across the ward by a nurse the other day, he had the distant look of a patient just emerging from the haze of general anaesthesia. “He has just come out of the recovery room and we’re taking him to his bed,” says the nurse. A few minutes later, he regained full consciousness, and as the pain kicked in, his cries echoed down the hallway.

When the fighting started, Eden was visiting his uncle in Goma. When they first heard gunfire, everyone panicked. Then they heard distant shouting, voices warning people to “stay in your homes, it’s not safe outside.” His family hunkered down, hoping they were safe from the shooting, but suddenly a shell came crashing down on them. Four family members died. Six others were seriously wounded, including Eden.

“We were unable to save Eden’s lower part of his left leg due to the extent of the damage,” says MSF surgeon Jacky Bonnan. “But we’ve done everything we can to save his right foot, and we are hoping it will heal well.”

The five other members of Eden’s family wounded by the shell are also being treated in Virunga hospital. Eden’s uncle has also undergone surgery to amputate his right leg. “I don’t understand,” he says. “Those who stayed outside are alright, but we took cover at home and have ended up here.”

More than 480 people were wounded in less than a week of fighting in and around Goma. Health facilities were unprepared for casualties on this scale. Local hospital staff did the best they could—“they did an amazing job,” says Bonnan—but they simply weren’t prepared or equipped to receive so many wounded patients at one time.

When the violence eased somewhat, MSF sent a surgical team to support the hospital. The team is currently performing around 10 surgical operations each day and providing drugs and medical supplies to help with post-operative care for patients—patients like Eden—until they are ready to be discharged.