The current Ebola outbreak in Democratic Republic of Congo (DRC) is the worst on record in the country and the second-largest epidemic of the disease recorded anywhere. Almost a year after the declaration of the outbreak, more than 2,190 people have died from the virus. 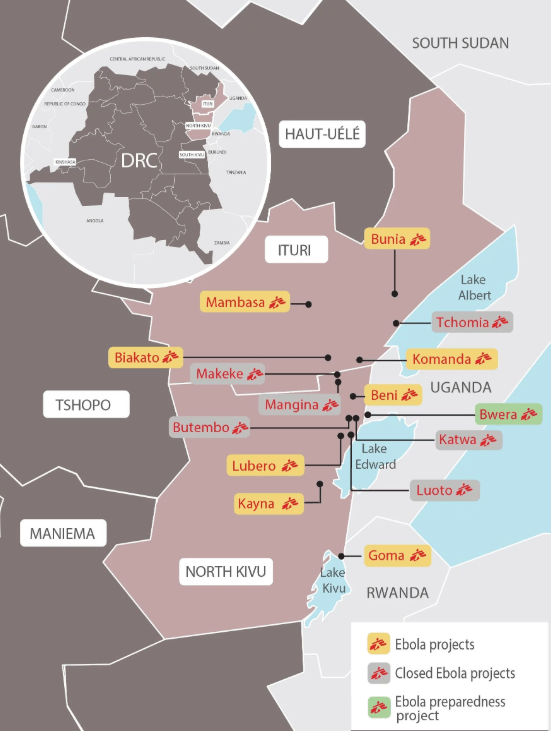 *Data reported by the DRC Ministry of Health and published by the World Health Organization.

Cases of Ebola have been reported in North Kivu, Ituri, and South Kivu provinces, with the current hotspots located in Ituri province.

While the rate of transmission has appeared to slow down over the past month—averaging 47 new cases per week in September compared to August’s weekly average of 65 new cases—the overall fatality rate remains high. In total, 157 new Ebola cases were identified during the month of September, compared to 306 newly identified cases in August.

MSF is an active player in the Ebola response, caring for patients in four Ebola treatment centers (ETCs) in Bunia, Beni, Goma, and Mwenga, as well as numerous decentralized isolation and transit facilities where people with suspected cases of Ebola are tested before going to a treatment center if needed.

MSF projects follow an integrated approach, aiming to support health centers and hospitals, investing in primary and secondary health care together with Ebola-related activities. MSF does not have any projects that focus on Ebola alone.

Since early September, MSF has supported Ebola vaccination activities in Beni with three teams. Additionally, in several projects in the area, MSF supports routine and mass vaccination campaigns against measles, a primary health concern identified by communities in the region.

In total, 13 health zones in northeastern DRC have reported people who have Ebola in the last three weeks. While no new cases have been identified for two months in the city of Goma—the capital of North Kivu and a city of two million people located on the Rwandan border—the current hotspots are now shifting from North Kivu to Ituri province, with Mambasa, Komanda, and Mandima reporting more than 50 to 60 percent of all recent cases. Mambasa is currently the primary hotspot, and there are not enough beds at the moment to admit all people who are suspected or confirmed to have Ebola. Kalunguta is another North Kivu hotspot.

Only 25 percent of new Ebola cases in the outbreak—33 percent in the last two months—are identified and monitored as contacts of people previously confirmed to have Ebola. Two-thirds of direct and indirect contacts are lost or never followed-up with, risking further transmission.

Over the past few weeks, preparations to introduce a new Ebola vaccine have been underway in two health districts in Goma. On November 13, DRC’s Ministry of Health announced that immunization with the second vaccine, Ad26.ZEBOV/MVA-BN-Filo—manufactured by Johnson & Johnson (J&J)—will begin as part of a large-scale clinical study in areas of the country affected by the ongoing Ebola epidemic. MSF is a partner in a consortium of international organizations involved in planning and implementing the study.

Approximately 23,000 doses of the Ad26.ZEBOV/MVA-BN-Filo vaccine have arrived in the country, meaning more people who are at risk of contracting Ebola can potentially be protected. Additionally, the study will result in more data on this second Ebola vaccine, which could pave the way for another approved tool to fight future Ebola epidemics.

Previously rVSV-ZEBOV, produced by Merck Pharmaceutical Corporation, was the only approved vaccine against Ebola. This vaccine is estimated to offer effective protection for 97.5 percent of participants ten days after vaccination and is a promising tool in the fight to contain the outbreak.

The “ring vaccination approach” strongly depends on successful contact tracing, which has been notoriously difficult in DRC with an estimated 66 percent of contacts in the last three months not being followed, and 75 percent in the outbreak overall. MSF supports the Strategic Advisory Group of Experts’s (SAGE) recommendations to begin geographic vaccination, use pop-up sites, and expand vaccination activities.