The current Ebola outbreak in Democratic Republic of Congo (DRC) is the worst on record in the country and the second-largest epidemic of the disease recorded anywhere. Almost a year after the declaration of the outbreak, more than 2,100 people have died from the virus.

On July 17, 2019, the World Health Organization declared the Ebola outbreak in Democratic Republic of Congo to be a public health emergency of international concern.

Ebola is not the only public health emergency in DRC. The main causes of mortality in the eastern region remain preventable diseases such as malaria and measles. In many health zones, only limited health care is available, as was even before the Ebola epidemic. Many health workers are now missing in hospitals and health centers across the region because they have been recruited by the internationally-funded and well-paying Ebola response elsewhere. The staff shortages and a lack of financial resources and medical supplies for non-Ebola medical needs threatens to further weaken the health system and lower communities’ acceptance of the Ebola response. 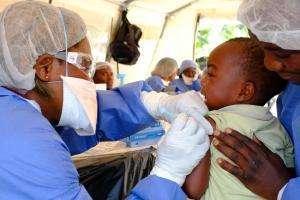 A substantial amount of resources have been invested in the Ebola response since the beginning of the epidemic. MSF strongly encourages actors and donors to consider the wider needs of the population rather than focusing response efforts on Ebola alone.

People have been reported to have Ebola in North Kivu, Ituri, and South Kivu provinces, with the current hotspots located in Ituri province.

While the rate of transmission has appeared to slow down over the past month—averaging 47 new cases per week in September compared to August’s weekly average of 65 news cases—the overall fatality rate remains high. In total, 157 new Ebola cases were identified during the month of September, compared to 306 newly identified cases in August.

The Ministry of Health officially declared the latest outbreak of Ebola virus disease in North Kivu on August 1, 2018, but the outbreak likely began months earlier. This is the tenth outbreak of Ebola in DRC in 40 years and by far the country's largest ever documented. It is also the second largest Ebola epidemic on record, behind the West Africa outbreak of 2014–2016.

Doctors Without Borders/Médecins Sans Frontières (MSF) is an active player in the Ebola response. MSF is caring for patients in four Ebola Treatment Centers (ETC) in Bunia, Beni, Goma, and Mwenga, as well as numerous decentralized isolation and transit facilities, where people with suspected cases of Ebola are tested before going to a treatment center. if needed. MSF is also supporting infection prevention and control (IPC) in local health care facilities and vaccination activities in the region. Our main priorities are to assess community health needs, provide timely health care to Ebola patients, ensure appropriate IPC standards in health care facilities, and improve access and quality to non-Ebola-related health care.

MSF projects follow an integrated approach, aiming to support health centers and hospitals, investing in primary and secondary health care together with Ebola related activities. MSF does not have any projects that focus on Ebola alone.

Since early September, MSF has been supporting Ebola vaccination activities in Beni with three teams. Additionally, in several projects in the area, MSF is supporting routine and mass vaccination campaigns against measles, a primary health concern identified by communities in the region.

In total, 13 health zones in northeastern DRC have reported people who have Ebola in the last three weeks. While the city of Goma—the capital of North Kivu and a city of two million people located on the Rwandan border—hasn’t identified any additional people with Ebola for more than two months, the current hotspots are now shifting from North Kivu to Ituri province with Mambasa, Komanda, and Mandima reporting more than 50-60 percent of all recent cases. Mambasa is currently the primary hotspot, and there are not enough beds at the moment to admit all people who are suspected or confirmed to have Ebola. Another hotspot is Kalunguta in North Kivu.

Only 25 percent of new Ebola cases in the overall outbreak—33 percent in the last two months—are identified and monitored as contacts of people previously confirmed to have Ebola. Two-thirds of direct and indirect contacts are lost or never followed-up with, risking further transmission.

The new treatments for confirmed Ebola patients that are available in ETCs are used under a study protocol framework that does not allow access beyond a particular patient or health worker. Extended use, like for additional protection for high-risk contacts, is not currently supported by the protocol. While confirmed patients and health workers benefit from the medication, their overall use remains restricted.

Persisting fears and misconceptions around Ebola treatment facilities and vaccination activities in local communities pose an additional challenge. A third of all deaths have occurred in people’s homes and communities where treatment was not available, and people weren’t properly isolated to minimize the risk of spreading the disease.

For many communities across the affected region, the Ebola outbreak is only one of several pressing medical concerns. Of patients admitted to Ebola transit and treatment centers with symptoms like fever, vomiting, or diarrhea, only four percent have tested positive for Ebola while 96 percent have other health needs. For most of the epidemic, the response has too narrowly focused on fighting Ebola while other concerns have gone unheard and neglected. As a consequence, health and humanitarian workers risk losing the trust and acceptance of the very communities they are trying to serve.

Where communities ask for health care services for illnesses other than Ebola, their needs should be taken seriously and an appropriate response implemented alongside, or sometimes before, direct Ebola-response actions. Several MSF projects have adjusted their approach based on lesson learned since the outbreak began.

The main vaccine that has been used throughout the outbreak—one that’s produced by Merck pharmaceutical corporation—is estimated to offer effective protection for 97.5 percent of participants ten days after vaccination and is a promising tool in the fight to contain the outbreak.

However, due to the limited use and investigational status of the vaccine, the vaccination strategy is limited to a “ring approach.” This means only contacts of people who likely or have been confirmed to have Ebola and their contacts—plus frontline workers like doctors and humanitarian staff who are most likely to interact with people who have Ebola—are eligible to be vaccinated.

The “ring vaccination approach” strongly depends on successful contact tracing, which has been notoriously difficult in DRC with an estimated 66 percent of contacts in the last three months not being followed, and 75 percent in the outbreak overall. MSF supports the Strategic Advisory Group of Experts’ (SAGE) recommendations to begin geographic vaccination, use pop-up sites, and expand vaccination activities.