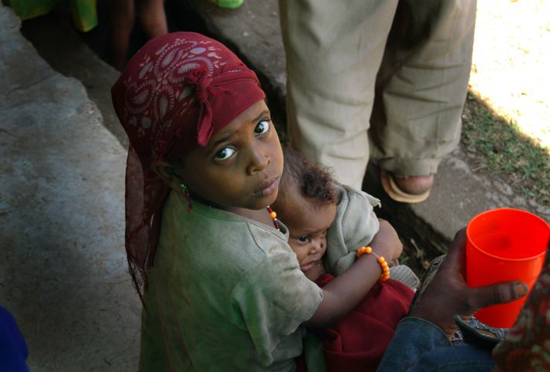 A child waits with her little sister at an MSF outpatient therapeutic program for malnourished children in Alem Gebeya, Oromiya region.

Addis Ababa, 26 June, 2008 – Doctors Without Borders/Médecins Sans Frontières (MSF) teams in the Oromiya and Southern Nations and Nationalities People's regions (SNNPR) of southern Ethiopia have treated about 6,500 children for severe malnourishment. Since May 13, MSF has been continually scaling up its activities in the areas where it works to respond to the alarming nutritional situation there.

Three MSF stabilization centers in Shashemane, Senbete Shinquille, and Ropi provide 24-hour medical care to severely malnourished children also suffering from complications such as malaria or pneumonia. To date, 957 children have been admitted to these centers in the Oromiya region, and 314 are currently receiving medical attention.

Children who are not suffering from additional complications are treated on an outpatient basis in outreach therapeutic programs (OTPs). They are provided with therapeutic food on a weekly basis, but are able to stay at home with their families. They return to the OTPs every week to be monitored by MSF medical staff and can be referred to a stabilization center if necessary. A total of 2,442 children have so far been admitted in 14 OTPs operating in the Oromiya region.

On June 2, MSF teams also started working in the Kambata zone of the neighboring SNNP region. One stabilization center has been set up in Shinshicho, Kachabira district, and 237 severely malnourished children have been admitted. Currently, 117 are receiving medical care there. Nine OTPs have also been established – four in Kachabira district, three in Tambaro district, and two in Hadero district. More than 2,778 severely malnourished children have been admitted so far to these outreach programs and are receiving nutrient-rich therapeutic food.

MSF teams are continuing their assessments in order to identify the most affected areas and respond where necessary. They will continue to expand their activities by increasing the numbers of OTPs in both Oromiya and SNNPR.

Following assessments in Arsi Negele, Oromiya region, MSF will now begin another OTP. In this area, MSF teams found malnutrition and a lack of food, which in the current context is likely to worsen.

An MSF team has assessed the area of Wolayita, SNNPR. The first data in Kindo Didaye district are alarming. The team has screened 494 children under five years old in four villages and has found an average of 15 percent severely malnourished, and 27percent at risk of severe malnutrition. Some malnourished teenagers and adults have also been identified. In this area, there is no aid organization present and little food is available, due to drought and price increases. There has been no food distribution for six months. After malnutrition, malaria is the most frequent pathology. MSF has therefore decided to launch emergency activities, focusing on malnutrition, malaria, and pediatric consultations.

In the eastern Somali region, MSF also runs access to healthcare activities, with a nutritional component. In Wardher, there are currently around 200 children enrolled in an OTP. While this figure is relatively low compared to the other areas in which we are working, the nutritional situation is of concern. On this we remain vigilant and ready to respond to changes. In Deghabur, 795 malnourished children – including 253 severely malnourished – are currently being followed in the MSF program.

MSF has worked in Ethiopia since 1984. In addition to the nutritional emergency, MSF is running long-term programs in several regions of the country. In the eastern Somali region, MSF treats patients suffering from tuberculosis; in Cherrati, MSF provides access to primary healthcare. MSF also runs a primary healthcare program in Deghabur and Wardher, including a nutritional component. In the north of the country; MSF works in Humera, Tigray region, providing care and treatment for people with kala azar. Also, in Abdurafi, Amhara region, MSF runs a program in prevention, care, and treatment of kala azar and HIV/AIDS.