"Even Running Away Is Not Enough": Attacks in Jonglei, South Sudan, Perpetuate Extreme Violence

Civilians continue to bear the brunt of extreme inter-communal violence in Jonglei state in South Sudan. 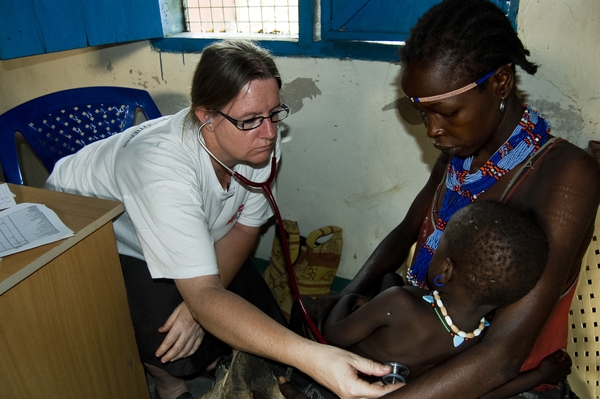 An MSF doctor examines a baby in Pibor, in Jonglei State in South Sudan, where people who went into hiding following recent attacks continue to come in for urgently needed medical care at MSF's re-opened facilities.

"Our team here in Pibor was evacuated on 23 December ..."

January 23, 2012
Listen to an interview with MSF field coordinator in Pibor, Karel Janssens, about returning to villages where MSF has been working in Pibor to find them destroyed, the MSF staff that are still missing, and the patients affected by the attacks. 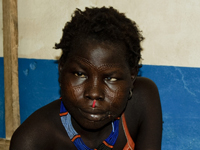 "I Don't Even Know What Happened To My Child"
Testimonies given by people who were injured or whose family members were injured, killed, or adbucted during attacks in South Sudan's Jonglei State.

Wounded people are still arriving at the MSF hospital in the town of Pibor, three weeks after a violent attack on the town and outlying villages in Pibor County. Many people were injured in the bush, where thousands remain, too afraid to come out of hiding. The hospital was also targeted during the attack.

“We are seeing a cycle of attacks and reprisals throughout this area of northern Jonglei,” said MSF head of mission Jose Hulsenbek. “For the civilians in this part of South Sudan, the fear of having to flee their homes or being killed is very real.”

A recurring characteristic of the attacks in Jonglei is their extreme violence. One woman suffering from a gunshot wound and treated by MSF in Pibor said she had fled to the bush with her husband, children, and 15 other family members. After running for eleven hours, they were found by a group of men who shot at them. “We scattered. They shot me in my thigh and my baby was hanging on my back. I tried to hide in the high grass but they found me because my baby was crying. They started beating my daughter until she kept quiet. They left us behind thinking we were dead.” Her son was also treated by MSF for a bullet wound to the chest that remarkably did not kill him.

“After these attacks many women and children are coming to us shot, stabbed, and beaten,” said Colette Gadenne, MSF operations coordinator for South Sudan. “They try to keep safe by hiding in the bush, but it seems that even running away is not enough.”

A deeply worrisome pattern is emerging, where people and their scarce resources are deliberately targeted by all the armed groups involved in inter-communal violence. Hospitals, health clinics, and water sources are all targets, suggesting a tactic of depriving people of life’s basic essentials, precisely when they need them most.

The village of Lekwongole, north of Pibor town, scarcely exists today after coming under attack.  All that exists of the MSF clinic there are concrete floors and walls, although medical activities resumed there on January 18.

“The people explained that during the day they dare to come out of hiding to search for food or to seek medical care,” said Karel Janssens, MSF project coordinator. “But at night they return to their hiding places in the bush where they are at risk of contracting malaria or respiratory infections.”

MSF medical teams are now treating serious wound infections, some several weeks old. Since re-launching emergency medical activities in Pibor on January 7, MSF has treated 47 patients with gunshot wounds, among them 16 women and 8 children. An additional 43 patients have been treated for stab wounds, beatings, or wounds sustained while fleeing in the bush. Since January 7, approximately half of MSF’s patient consultations in Pibor have been for malaria; people sleeping in the bush are more vulnerable to contracting the disease.

MSF is extremely concerned for the health and well-being of civilians forced to flee, either from fighting or from fear of an attack. They hide in the bush, with little to no shelter and limited access to food. If they are able to return home, they often only find ashes where their houses once stood.

In the wake of the Pibor attack, MSF has learned that Allan Rumchar, an MSF watchman, and his wife were killed. Of 156 locally recruited MSF staff members, 25 are still unaccounted for and MSF remains deeply concerned for them.

The violence in Pibor is not isolated. After a January 11 attack on the village of Wek in northern Jonglei State, MSF evacuated 13 patients by air, mostly women and children in need of urgent surgical care at MSF’s hospital in Nasir. That followed an August 2011 attack on the town of Pieri and surrounding villages, during which scores of villagers were killed.  In the past six months, 185 people with serious wounds have sought care from MSF teams in Lankien, Pieri, and Yuai.

In a December 2009 report, Facing Up to Reality: Health Crisis Deepens as Violence Escalates in Southern Sudan, MSF documented the escalation of inter-communal violence in Jonglei and Upper Nile states, and its increasing impact on civilian populations. MSF treated 392 people wounded by violence that year, and estimated that 86,000 people were displaced. The situation has not improved. In the past six months, MSF has treated more than 250 people wounded in violence in Jonglei State, the majority of whom are women and children.

MSF has been working in South Sudan since 1983, and currently runs more than a dozen projects in eight states. MSF runs its own medical facilities and supports Ministry of Health facilities in six locations in Jonglei State, providing basic health care, therapeutic nutrition, and kala azar and tuberculosis treatment, serving a total population of some 285,000 people. In 2011 the MSF medical facilities in Lekwongole, Pibor, and Pieri were targeted and either destroyed or ransacked during inter-communal violence. MSF condemns the targeting of unarmed civilians and of medical assets by any armed group.