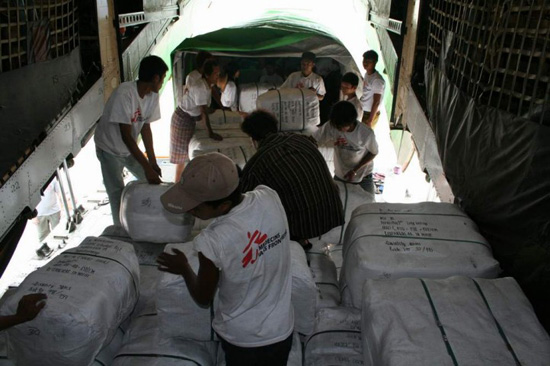 An MSF cargo plane being unloaded in Yangon airport.

More than one week after cyclone Nargis devastated the southwestern areas of Myanmar (Burma), the first MSF cargo plane arrived this morning in Yangon (Rangoon) at 8.30 a.m. local time, loaded with 34 tons of medical supplies and relief equipment. After customs clearance, the goods have been transferred to MSF warehouses in the city.

The delivered goods include treatments for diarrheal diseases and malaria, ready-to-use therapeutic food, plastic sheeting, water containers, water pumps, and an eight-person zodiac boat. Three more MSF cargo planes are on their way from Europe and Dubai, and are expected to arrive on Monday evening and Tuesday, carrying another 120 tons of material. 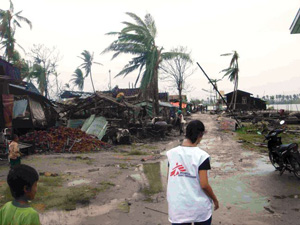 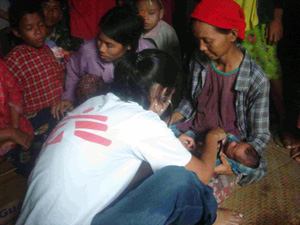 MSF distributes food and provides medical care to the people in Bogaley.

The newly arrived relief materials will be sent by truck to the disaster areas in the coming days. However, the needs of the affected population assessed in the Irrwaddy delta area by MSF aid workers are so vast that many more supplies will have to come into the country to deal with the crisis.

Cyclone Nargis hit Myanmar on May 2, 2008, affecting several areas of country, and causing a huge number of deaths. More than a week later, large parts of the population remained without safe drinking water, food, and shelter, and little international aid had reached people in need.

MSF now has more than 200 staff in the delta and between 10 and 20 new staff are arriving daily. In Twantey , Pathein (Bassein), Haigyi, and Laputta, 22 teams are now doing consultations, distributing food, plastic sheeting and other relief items, purifying water and cleaning up sites where people have sought refuge.

In Bogaley and Kungyangon, MSF’s work has been restricted by increasing constraints by the authorities. In Bogaley, the MSF teams have not been permitted to move outside the periphery of the town and are unable to provide as much assistance as they could to respond to the enormous needs in terms of food and medical care. In some other areas, only Burmese national staff are allowed to go through checkpoints.

Activities in the Delta Area

Supplies are continuing to arrive at the MSF base in Pathein. The supplies include food, plastic sheeting, and other medical and relief supplies. The medical supplies have been donated to Pathein Hospital and an office has been set up to coordinate the activities in the area.

A significant number of staff has been hired locally by MSF, bringing the total number of people working for the organization in the Delta to more than 200. Most of the MSF staff working in the region are medical personnel, water-sanitation experts, or logistical specialists. There are 22 teams working in the most affected areas. Teams are carrying out medical consultations, distributing food, plastic sheeting, and other relief items, purifying water and cleaning up site where internally displaced people (IDP) have settled. There have been no signs of any epidemics.

MSF has also set up an operational hub in Haingyi—in the south west corner of the Delta. The town was badly affected with 90 percent of houses destroyed. There are four teams working in Hainghy. Two teams are operating in Tongwa and there are a further four teams in Pyinsalu, two towns east of Haingyi. New supplies, including plastic sheeting and food, are being sent to Pyinsalu today, which will reach 20,000 to 30,000 people.

There are now eight teams working in Labutta, which was also badly affected with 80 percent of buildings damaged. MSF has begun setting up a second base in Laputta where there are about 30 IDP sites with 3,000 to 5,000 people in each camp. Food, shelter materials, water-and-sanitation items, and medical supplies have been sent to Laputta. MSF is coordinating with aid agency Merlin on water-and-sanitation activities and the World Food Program (WFP) on bringing in food supplies.

MSF has set up a base in Twantey, where two teams have distributed food rations to 4,350 people and are carrying out medical consultations, as well as nutritional screening of children. They have also cleaned and chlorinated contaminated wells in order to improve access to drinkable water.

On Sunday, an MSF team visited the town of Ma-Ubin, where 3,000 people have been resettled, the needs seem covered by the authorities. Food and clean water are available. MSF intends to assess the situation in rural areas further south of Ma-Ubin in the coming days.

MSF teams have also assessed the area of Kawhmu, with an estimated population of 140,000. Tens of thousands of people are homeless and have gathered in about 60 IDP sites. The rural areas have been heavily flooded and very little assistance has yet arrived.

In Kungyangon, 11,000 houses have been destroyed. Displaced people in the town have gathered in 20 IDP sites with around 600 people in each. MSF is planning to organize mobile medical teams in the town and by boat in the rural areas.

In Bogaley, a district of 100,000 people, thousands have been killed and many more are homeless. The hospital of Bogaley is still functioning but seven out of the eight health centers in the area have been destroyed. MSF has distributed food and relief items and provided medical care to the people, but is now facing increasing constraints by the authorities.

MSF is distributing supplies and giving water-and-sanitation support at around 30 IDP sites around the capital, although it is expected that these activities will wind down in the next few days. MSF is investigating whether there is a need to do outreach activities in the area around Yangon.

More than one week after the disaster, despite the sending of three cargo planes and some positive signals, it has been very difficult to provide much needed supplies to the heavily affected population in Myanmar. As of today, MSF still awaits the approval of dozens of visa applications for technical support staff and coordinators submitted to various embassies around the world.