Five Lessons Learned During the Latest Ebola Outbreak in DRC

Four people died in the most recent Ebola outbreak that occurred in a remote, forested area of the Democratic Republic of Congo (DRC). This small outbreak (five laboratory-confirmed and three probable cases) was quickly curtailed. Below are five lessons Médecins Sans Frontières/Doctors Without Borders (MSF) learned from the first Ebola outbreak since the end of the epidemic that devastated West Africa in 2014 and 2015.

One of the reasons this outbreak remained small is Dieumerci (“Thank God” in French)—the head nurse at the health center in the northeast of the DRC where the first cases occurred. He rang the alarm bell as soon as he detected a risk in a seriously ill man who turned out to be the second Ebola case of the outbreak.

Before Ebola is properly identified and epidemic control measures taken, healthcare workers are at high risk of becoming the first casualties and health centers are at high risk of becoming places where the virus is spread. In the West African outbreak, the virus went unnoticed for weeks before it was identified. But unlike in the three countries affected in the 2014-2015 outbreak—Sierra Leone, Guinea, and Liberia—Ebola is known in the DRC.

The "Ebola River," where the virus was first discovered, runs about 60 miles away from the Likati river in north DRC. That doesn’t mean that it is common disease in the area, but it is known, and Dieumerci recognized the symptoms. Dieumerci’s quick action is not something that should be taken for granted. The 1,000 inhabitants of the village where he works live along a stretch of road a few hundred meters from the start of the world’s second-largest tropical forest. Here there is no phone line or cell phone reception, and no electricity except for a few solar panels that would wait months for repair if they were to break, and some generators that are always at risk of running out of fuel.

Healthcare workers play a crucial role not only for the health of the people they serve directly, but also for general epidemiological surveillance for outbreaks like Ebola, but also for more common deadly infectious diseases such as measles and cholera. However human resources for health remain inadequate in many developing countries[1]. On that fateful day where the second Ebola patient came to the health center, Dieumerci could have easily been on a sick leave, or visiting family somewhere else in the country. A health system cannot rely on just one person to play the crucial role of on-the-ground surveillance. What is needed are proper surveillance systems in resource-poor countries, which were clearly lacking in West Africa at the beginning of the epidemic.

So, thank you Dieumerci. We should hope that during the next outbreak—Ebola or any other infectious disease—there will be someone like Dieumerci to ring the alarm bell. 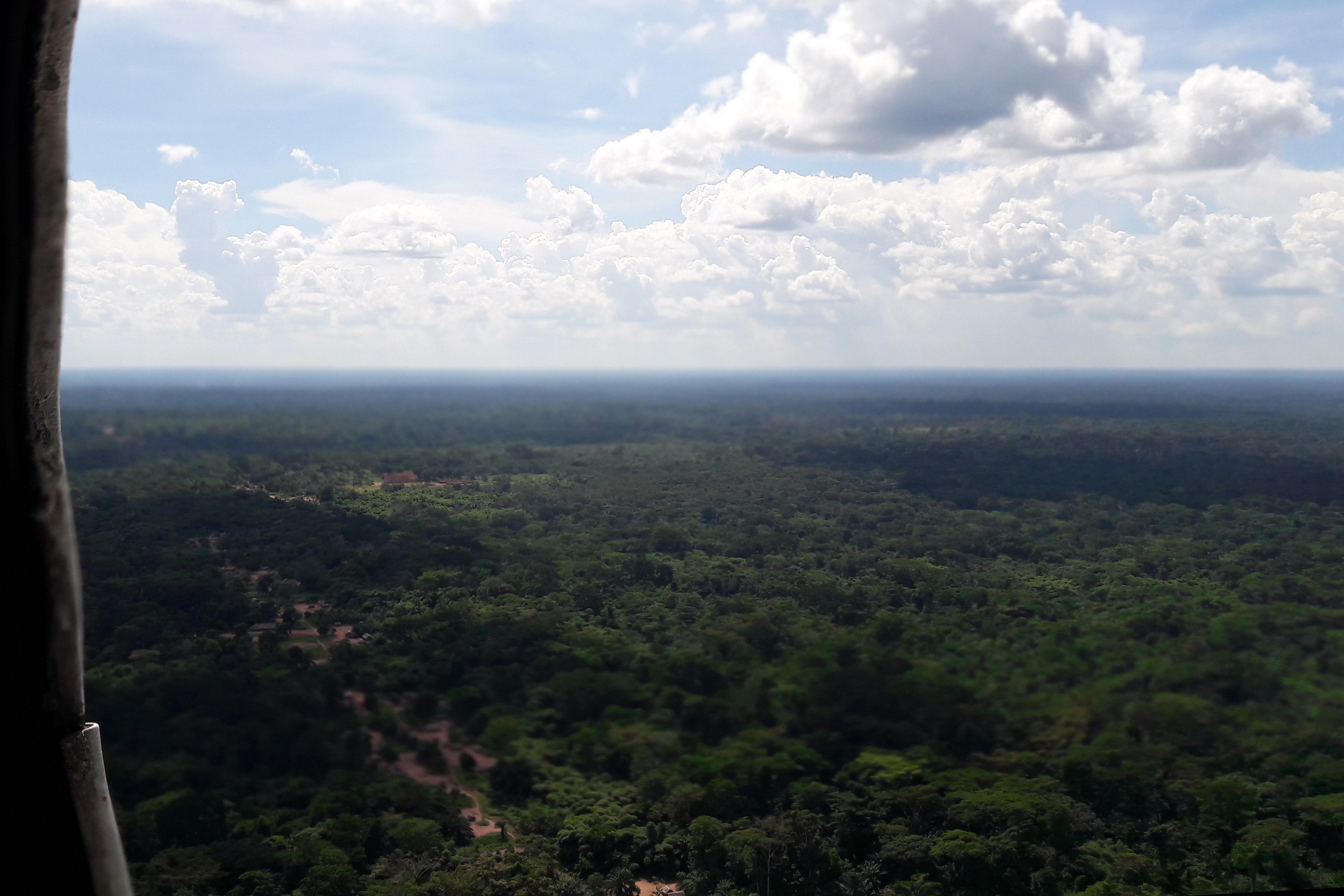 The word “Ebola” doesn’t ring the same after the West Africa epidemic that killed at least 11,300 and infected over 28,000. Dieumerci’s alarm bell sent shock waves across the world. Congolese authorities immediately activated their outbreak response team and had strong support from WHO and other organizations.

“The pressure we felt was very different from previous comparable outbreaks: it was clearly at the top of the agenda. When it comes to Ebola, we have all learned that it’s better to be safe than sorry in order not to repeat the disaster of 2014-2015. But it is sad to still see that other outbreaks in countries like the DRC do not trigger the same mobilization, even in regards to the main killer diseases like cholera or measles.

"Once the Ebola outbreak was over, we were able to re-assign some of the MSF staff towards a serious cholera outbreak in Kimpese, in the other side of the country where our teams have treated 1.100 patients. Considering the dire health needs in many parts of the country additional support is always welcome.” 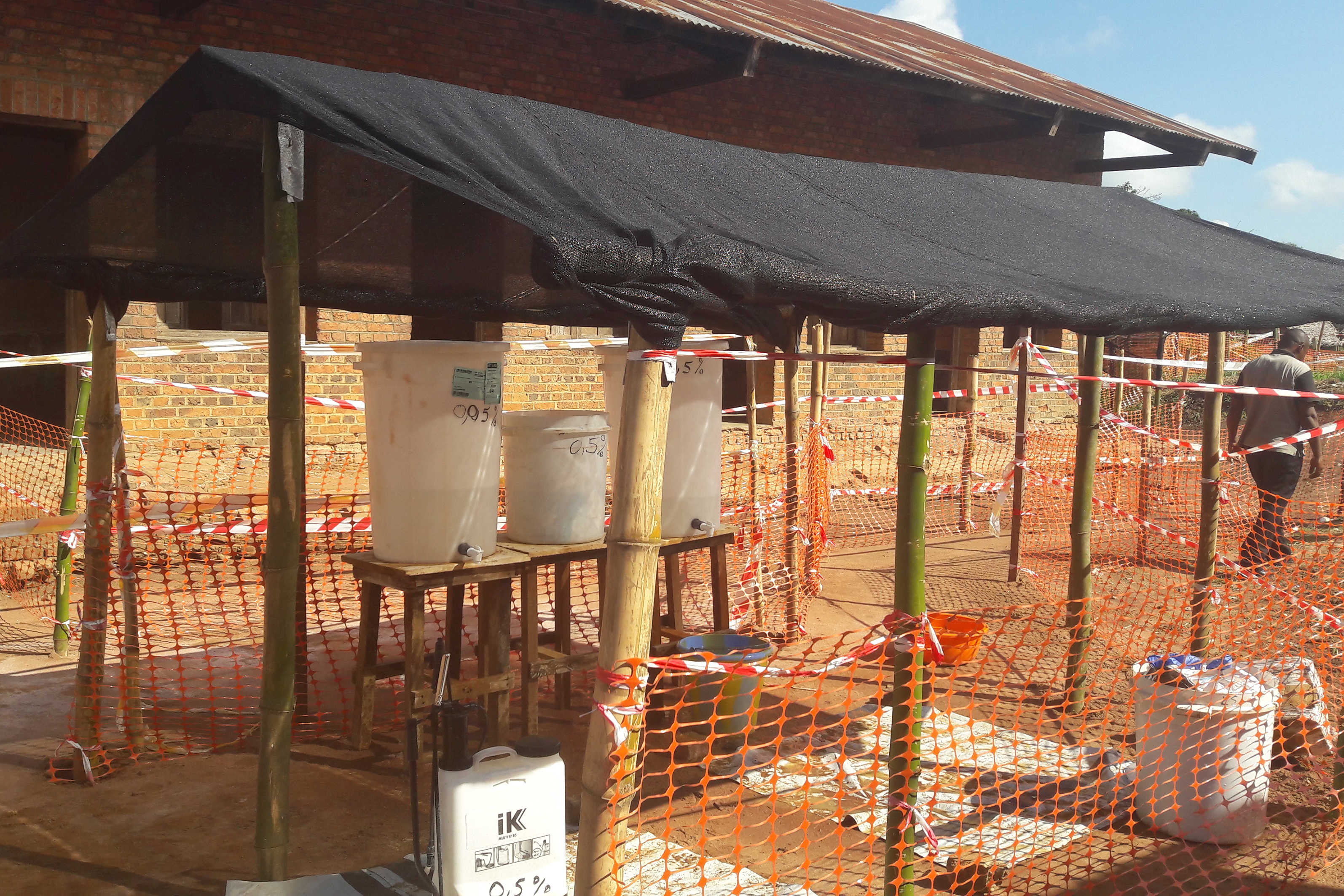 The promise of new tools (drugs or vaccines) should not overshadow the necessity of putting in place the basic pillars of outbreak control. It starts with good surveillance and is followed by the five pillars of outbreak control: safely isolating and treating the sick; actively looking for potential new cases and surveilling those who have been in contact with them; burying the dead safely; engaging and mobilizing the affected communities; and, offering psychological support.

In West Africa, the havoc wrecked by Ebola on the entire health system made more indirect than direct victims of the virus[2]: children were prone to contagious diseases because they were not vaccinated; complicated births lead to the deaths of mothers and/or children because there were no healthcare workers to care for them; and untreated cases of malaria became fatal.

When important international health actors come in to give a hand to control the Ebola outbreak they should give support to the local health facilities that often have much smaller means and equipment: training the staff; and ensuring that there is basic protection equipment available (even items as basic as gloves are often lacking in remote health posts) and that their pharmacy is stocked with first aid supplies and basic medicines for widespread diseases like malaria. MSF’s experience in DRC has shown that training for frontline workers, even when done ad-hoc, can bring sustained effects to improve their performance in surveillance[3].

Moreover, we must keep in mind that deployment of international aid is not only a means to stop the spread of the disease, it is, most importantly, to benefit the affected community. For this reason, in areas where people have very limited means, health care must be free. For example, a person with a fever who is transferred to a health center to be tested and turns out to be negative for Ebola should not be charged for tests or transportation. The few dollars required are a mere drop in the ocean compared to the overall cost of containing the outbreak, but they can be an unbearable sum to people in limited resource areas and ultimately a deterrent to seeking diagnosis and treatment. 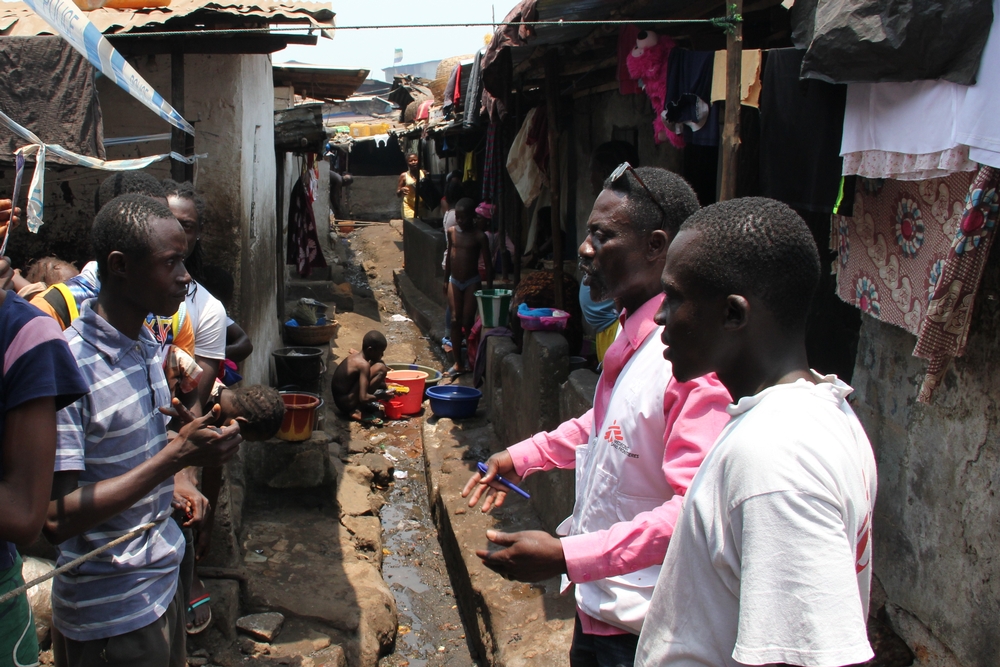 Like the majority of hemorrhagic fever outbreaks prior to West Africa, the recent one occurred in a very remote, forested area where the virus was already known to exist within an animal reservoir (assumed to be fruit bats) that is occasionally transmitted to apes, monkeys, or people.

Some people are indeed very mobile in the region, but they can only go as far and as fast as their available transportation; options are usually limited to walking and the occasional motorbike. Dieumerci’s village is about 27 miles from Likati—the closest town home to 18,000 people where the majestic cathedral and large (but under equipped) hospital are remnants of a time when a railroad was still linking local coffee and cotton plantations to the rest of the country. But today the railroad has been completely consumed by the forest.

The first material necessary to set up a basic treatment center for Ebola patient was sent from Likati to the village on the back of motorbikes and it took days for the road linking the two to be repaired, as it was cut in several sections by fallen trees and broken makeshift bridges. Once the repairs were good enough to allow four-wheel vehicles to pass, the outbreak was already over. Still, those cars were the first to be seen in many years, and it seemed like most villagers came to witness this event.

By contrast, from Guéckédou in Guinea, where the West Africa outbreak started, people can jump on a motorbike and be in the heart of the capital Conakry with its 2.5 million people within two days. As in all previous outbreaks before West Africa isolation played a key factor for the containment of the virus. 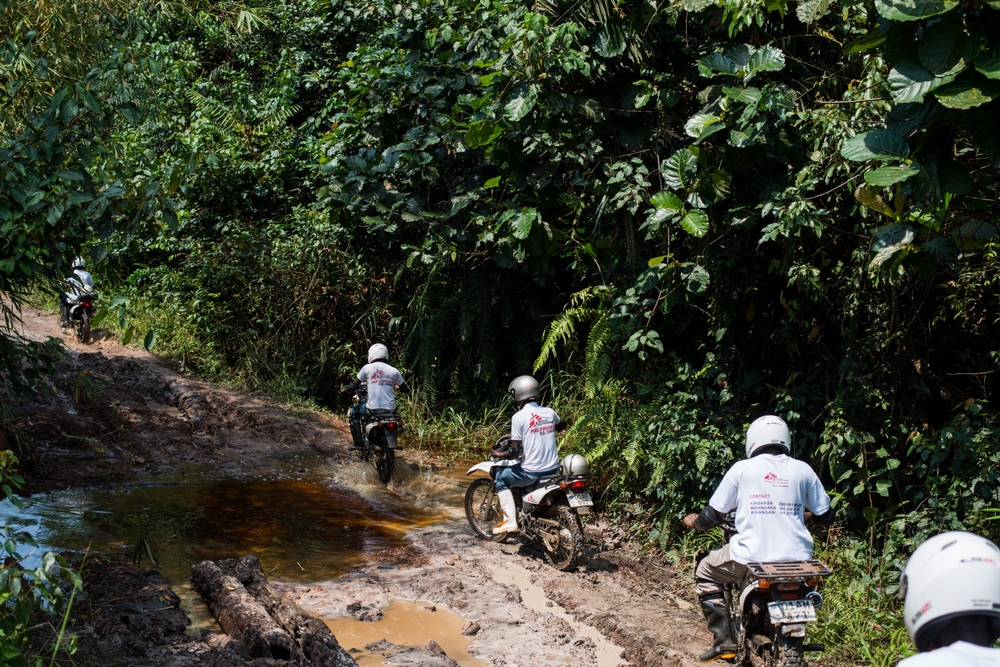 #5. Medical Innovations are not the Magic Bullet

MSF was willing and actively preparing to use the Ebola treatments that are still in development. However the outbreak was over before the process to allow the use of experimental products was complete, so none could be used this time. This outbreak however acted as a booster to speed up the process of preparing medical protocols so that new drugs, still in the experimental phase, can be used in a way that is as safe and ethical as possible.

The rVsV-ZEBOV vaccine—the most advance and suitable candidate for an Ebola outbreak today—is an investigational vaccine that therefore needs to be implemented through a study protocol. Such a study protocol and a vaccine strategy, including informed consent under good clinical practice, are mandatory to access the vaccines. The study protocol was developed and approved by the MSF Ethics Review Board a few months ago and was prepared in order to be ready for implementation should an outbreak occur. A dedicated team from MSF’s research arm Epicenter was also ready to be deployed for the implementation of the protocol.

Unfortunately, the negotiations at the DRC Ministry of Health level only took place when the outbreak had already been declared and it took some time to explain the nature of this intervention, including the difference from a vaccination campaign and the potential constraints that MSF would be faced with during the implementation (for example, the remote location of the outbreak and the difficulties with ensuring the vaccines were kept at the correct temperature). Nevertheless, MSF obtained authorization from all the regulatory bodies required to start activities, which should beneficial in case of a future outbreak.

The limited size of this outbreak and the rapid control measures put in place early on were the reasons why, in the end, the vaccine was not needed. In most likelihood, the next inevitable outbreak will happen in a similar setting. MS and other actors should continue to learn how to best tackle Ebola and ensure that the outbreak in West Africa remains an isolated tragedy. 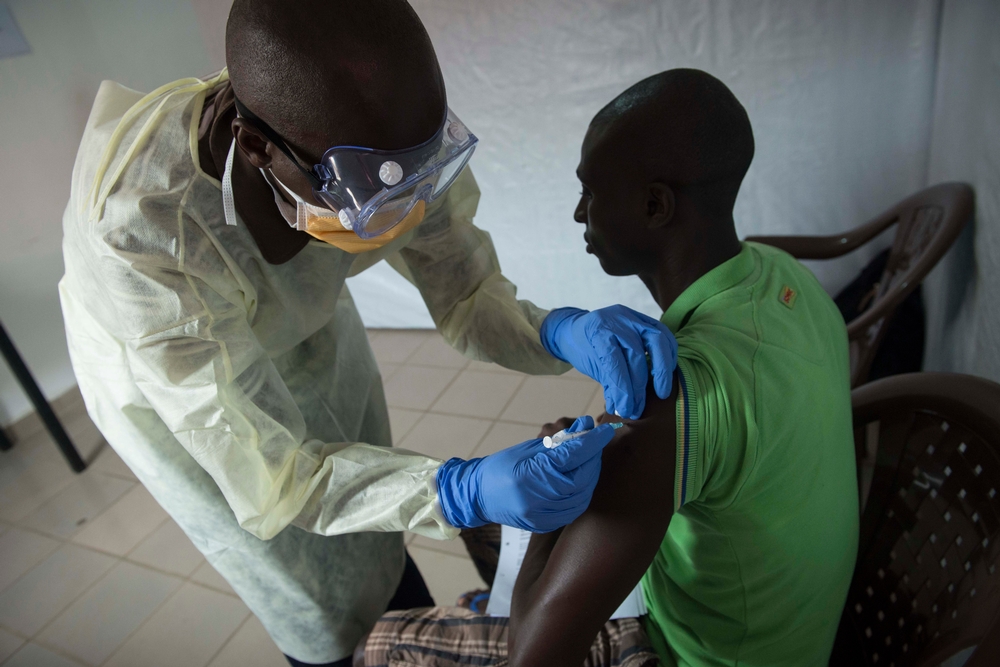 Since 1990 MSF has responded to over a dozen outbreaks in sub-Saharan Africa. During the devastating Ebola outbreak that struck mainly Liberia, Guinea, and Sierra Leone in 2014-2015, MSF launched one of the largest emergency operations in its 44-year history. MSF admitted 10,310 patients to its Ebola management centers of which 5,201 were confirmed Ebola cases, representing one-third of all WHO-confirmed cases. During the first five months of the epidemic, MSF handled more than 85 percent of all hospitalized cases in the affected countries. At the peak of the epidemic, MSF employed nearly 4,300 staff—most of whom were from the affected countries—who ran Ebola management centers, conducted surveillance, contact tracing, and health promotion, and provided psychological support.