Fleeing the Violence in Syria: Syrian Refugees in Lebanon 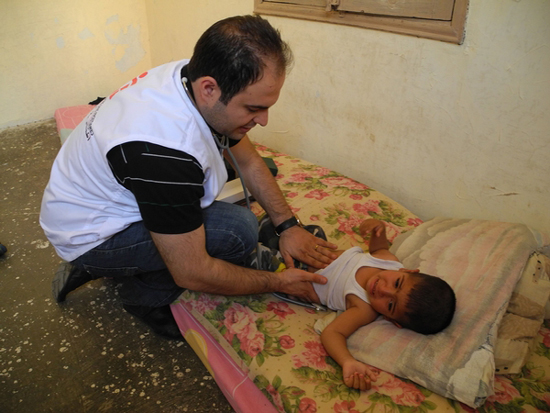 An MSF doctor examines a child in the home of a Syrian refugee family. 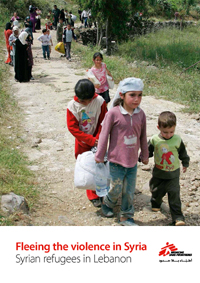 As the crisis in Syria intensifies daily, with thousands continuing to flee to neighboring countries to search for safety, humanitarian needs inside and outside the country are escalating rapidly. The situation is desperate, thousands have been killed and wounded, and medical assistance in Syria is not only limited but has itself become a target of the regime. Since the crisis began in March 2011, the ability for international organizations, including Doctors Without Borders/Médecins Sans Frontières (MSF), to provide aid inside Syria has been severely restricted. MSF has therefore strengthened its response to the refugees who are flowing across the Syrian borders into countries such as Lebanon, Jordan, and Iraq.

In November 2011, MSF expanded its response in Lebanon to provide urgent assistance to the influx of thousands of Syrian refugees. The organization has opened new medical projects in the north of Lebanon in the Wadi Khaled area, in Tripoli, and also in various locations in the Bekaa Valley. In order to develop a comprehensive understanding of the refugees’ health conditions and living situations, and to adapt its programs accordingly, MSF carried out a study at the end of May 2012. In these three locations, representatives of 889 families were interviewed.

In the face of a rapidly declining humanitarian context, the study strongly recommends a sustained and viable assistance to be provided by the Lebanese government and other national and international organizations. Although assistance was quickly deployed in the early days of the crisis, and numerous organizations are still supporting the aid response, clear gaps are arising and the response must be maintained and reinforced. Of most concern is the recent announcement by the Lebanese government that medical assistance to refugees has been cut due to funding issues. This funding must be urgently reinstated in order to respond to the medical needs of refugees which will only grow as more people stream across the border and the conflict intensifies in Syria.

Treatment for chronic diseases such as asthma, diabetes, hypertension, and cardiovascular disease is a major concern, with the cost of drugs required on a long-term basis out of reach for many. Almost half of interviewees were found to be in need of medication and treatment for chronic diseases, however, 18.7 percent are not receiving it. There are also significant gaps in hospital-level care, with four out of ten interviewees saying they were not able to access a hospital due to reasons such as cost and insecurity.

For many refugees, living conditions are extremely precarious. According to MSF internal estimates, over a thousand people are accommodated in different villages of Wadi Khaled and the Bekaa Valley in overcrowded shelters. Living close to the border, they continue to fear for their safety. In Tripoli, rental costs are high and many families have to share apartments.

Syrian refugees in Lebanon are largely reliant on humanitarian assistance. Individuals within the Lebanese community itself have made a tremendous effort to integrate and help the refugees, but their own financial constraints mean they are reaching their limits in terms of their own capacity to cope.

Humanitarian relief and official support to Syrian refugees in Lebanon and that of their host communities has been an important factor in avoiding a major health crisis thus far, however the prospect of any reduced assistance will place them in danger and could expose them to the consequences of the Syrian crisis once more. For this reason, ongoing support to the Syrian refugees and their host communities must be provided.