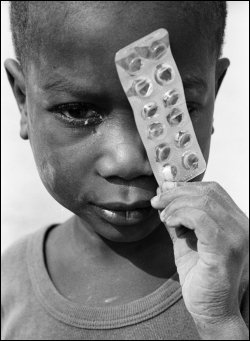 Geneva, 19 May 2006 — As health ministers meet in Geneva at the World Health Assembly (WHA) next week, the medical humanitarian organization Doctors Without Borders/Médecins Sans Frontières (MSF) is calling on governments to overhaul the way medical research and development (R&D) is prioritized and financed, and support a resolution proposed by Kenya and Brazil for a "global framework on essential health R&D." Despite gathering increasing support from many governments, this resolution has faced consistent obstruction on the part of the World Health Organization (WHO) Secretariat.

The proposed resolution is boosted by the analysis and recommendations reached by the report of the independent Commission on Intellectual Property, Innovation and Public Health (CIPIH), which was set up by the WHA in 2003. The report confirms that the current system, which relies on patents to stimulate innovation, does not foster the necessary research to address the needs of billions of people in developing countries.

Tuberculosis is a perfect example of how the system is broken. "Despite massive needs and close to two million deaths a year, we are still forced to use a test that only detects half of all cases, and use long, cumbersome and increasingly inefficient treatment," said Dr. Tido von Schoen-Angerer, Director for R&D at MSF's Campaign for Access to Essential Medicines.

This is because the R&D system provides greater rewards for developing drugs that sell well, rather than drugs that meet unaddressed health needs. Pharmaceutical companies therefore largely ignore the needs of patients in developing countries, while gearing their research towards wealthy markets. A new analysis by MSF shows that only 1 percent of the drugs reaching the market in the three decades between 1974 and 2004 address neglected diseases such as kala azar, sleeping sickness, or tuberculosis.

"The CIPIH report is a strong call for action by governments and the WHO," said Ellen 't Hoen, Director for Policy and Advocacy at MSF's Access Campaign. "It's been a long uphill struggle to get the WHO interested in this question, and if you look at the enormous health needs out there, you think, how on earth is this the case?" she added.

"Governments need to commit to changing the rules of the game, or people will continue to die because the diseases they suffer from don't provide profits," said Dr. Rowan Gillies, International President of MSF, speaking at a press conference in Geneva. "If this WHA doesn't come out with a strong initiative, paving the way for a new needs-driven R&D framework and securing its public financing, WHO and governments will have again missed a vital opportunity to tackle urgent health needs," he added.

Although product development is not a traditional activity for a medical humanitarian organization, MSF increasingly has no choice but to act in this field. After having been a co-founder of the Drugs for Neglected Diseases Initiative (DNDi) three years ago, the organization is now collaborating with the Diagnostics Development Unit at Cambridge University, which is developing a much-needed simple, cheap and rapid HIV viral load test for use in resource-poor settings, called SAMBA (Simple AMplification BAsed nucleic acid test).

Right now, the difficulty of diagnosing HIV in small children in resource-poor settings is an obstacle to putting them on life-prolonging treatment, so a simple and affordable test is an urgent priority. If successfully developed, the SAMBA test will help diagnose HIV in infants and improve treatment monitoring in adults.

"We are aiming to simplify current technologies so that children with HIV/AIDS can be diagnosed and virological failure can be detected on the spot, without the need for specialized facilities, highly trained personnel and expensive equipment," said Dr. Helen Lee, the researcher leading the project at Cambridge University.

"We feel compelled to support the development of vital health tools, because industry is failing to address the needs of the most vulnerable, and governments and the WHO are not taking responsibility either," said Dr. von Schoen-Angerer. "What we are doing is just a stopgap measure. Precisely this kind of R&D is what needs to happen on a much wider scale, and needs to be supported through a global framework," he added.