Extreme cold and the ongoing waves of new arrivals of migrants are putting pressure on the already fragile reception system in Greece. 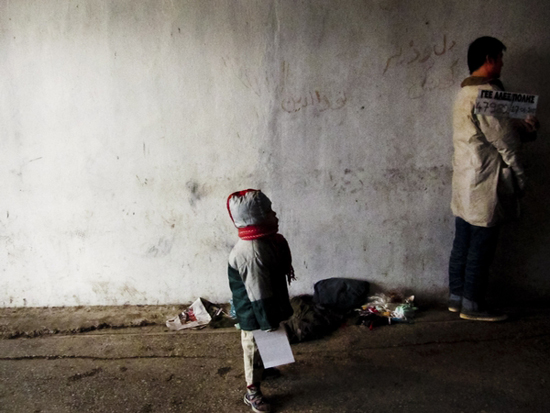 A small Afghan child, one of the many newly arrived migrants in the Evros region, is detained in a border police station.

The constant arrival of migrants in Greece’s Evros region, coupled with the extreme weather conditions of the past few weeks, has put pressure on the already fragile system for receiving migrants in the border police stations of Soufli, Tychero, and Feres, and in the detention center of Filakio.

“The newly arrived migrants were spending up to a day in waiting areas in freezing temperatures,” says Antonio Virgilio, head of mission for Doctors Without Borders/Médecins Sans Frontières (MSF) operations in Greece.

“Migrants have already suffered harsh conditions on their journeys to cross the border," he added. "Once in Greece, they had to wait for hours, without warm clothes to protect them from the extreme cold, and sometimes without receiving a medical check-up from Ministry of Health doctors.”

There is no heating in the waiting areas of the three Evros border police stations, and migrants are not provided with extra clothes, sleeping bags, survival blankets, or other means of keeping warm. “The reception conditions are unacceptable,” says Virgilio.

An emergency team from MSF has been responding to the migrants’ immediate needs in the three border police stations and in Filakio detention center. The team is on call 24 hours a day, conducting medical triage and providing migrants with warm clothes, sleeping bags, survival blankets, and hygiene kits. During the first four days of intervention, the MSF team assisted 125 migrants, including women and children, who arrived shivering, exhausted, and complaining of pain in their legs.

The team plans to make improvements to the waiting areas so that migrants receive at least some protection from the sometimes extreme cold.

The Greek authorities are building a new facility, the Poros transit center, which should be operational by mid-March. All newly arrived migrants will be registered in the new center, while MSF will carry out medical triage.

In 2011, 54,974 undocumented migrants and asylum seekers were apprehended for illegally crossing the border into Greece’s Evros region.

During 2011, MSF doctors provided medical treatment to 2,689 migrants at the border police stations and detention facilities of Filakio, Soufli, Tychero, Feres, and Venna. The majority were suffering from respiratory infections, gastrointestinal problems, and skin infections due to the poor living conditions and overcrowding.

Sixteen migrants were suffering from frostbite and were given first aid; a number of them were in severe condition and were referred to a hospital.